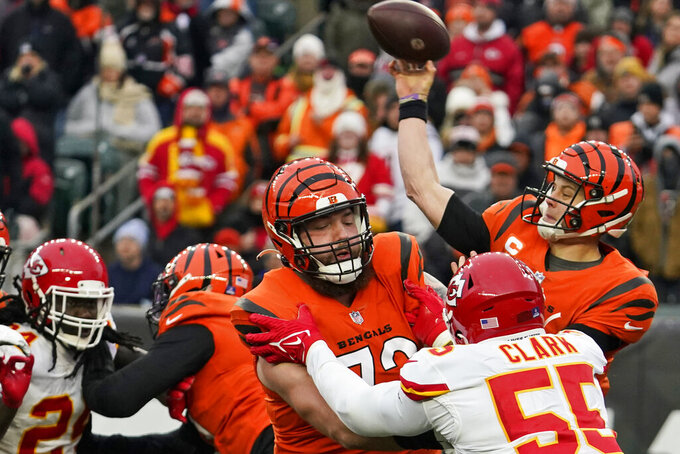 CINCINNATI (AP) — Patrick Mahomes had a message for young Bengals star Ja'Marr Chase when the two met on the field after Cincinnati's dramatic 34-31 win over Kansas City to clinch the AFC North title.

“Keep going — we'll see you in the playoffs,” the Chiefs quarterback told Chase.

The Bengals (10-6) are finally back in the postseason, thanks to Chase and quarterback Joe Burrow, who both shattered team records on Sunday. Chase's 266 receiving yards was more than Mahomes had passing (259) in the game.

Kansas City (11-5) had its eight-game winning streak snapped and fell out of the top seed in the AFC, ceding that spot to Tennessee.

The last Cincinnati playoff appearance was 2015 when the team started 8-0 and won the division, only to lose a bizarre wild-card game to the Steelers. The Bengals haven't won a playoff game in three decades.

There were plenty of heroics from a new generation of Bengals.

In addition to breaking Jerry Butler’s NFL rookie record of 255 yards for Buffalo against the New York Jets on Sept. 23, 1979, Chase set a record for receiving yards in a season by a rookie. He has 1,429 yards with one game left in the league’s first 17-game season, surpassing Minnesota’s Justin Jefferson, who had 1,400 yards in 2020.

He had 11 catches, including three touchdowns.

Joe Burrow threw for 466 yards and four scores while outdueling Mahomes, and the Bengals rallied from three 14-point deficits against the AFC West champs, finally closing them out when rookie Evan McPherson kicked a 20-yard field goal as time expired.

“That was fun,” said Burrow, who puffed on a victory cigar in the locker room that running back Joe Mixon had left for him a couple weeks ago.

The Bengals' winning drive was filled with drama.

On fourth-and-inches with under a minute left, Cincinnati decided to go for a touchdown instead of calling on McPherson for a field goal and giving the Chiefs the ball back with a chance to win.

“I knew we’d go for it," Burrow said. "They’ve got Patrick Mahomes on the other side. He could go down and win the game.”

Burrow threw incomplete in the end zone, but Chiefs cornerback L'Jarius Sneed was flagged for illegal use of hands, giving the Bengals a fresh set of downs. With Burrow limping on the sideline, backup quarterback Brandon Allen was called on to kneel twice before McPherson came on for the game-winner.

Burrow said his right knee was sore but insisted he could have stayed in the game and will be fine.

The second-year quarterback was outstanding again, completing 30 of 39 attempts. He was sacked four times and hit at least six more times but was as accurate as ever, and Chase caught everything that was thrown near him.

“If you play one-on-one, good luck with that," Burrow said. "I know he’s down there somewhere. I just throw it and let him make a play.”

Mahomes looked as if he had the game under control early. He threw two first-quarter touchdown passes to give the Chiefs the early lead, but he didn't get another one.

The Chiefs led 14-0, 21-7 and 28-14 in the first half. They were ahead 28-17 at halftime before the Bengals began the latest of several second-half surges this season.

A 69-yard TD pass from Burrow to Chase early in the second half cut the Chiefs’ lead to 28-24. Kansas City responded with Harrison Butker's 34-yard field goal.

Burrow then hit Tyler Boyd for a 5-yard TD, capping an 86-yard drive that was twice extended by flags on Sneed, including an unnecessary roughness penalty that gave Cincinnati first-and-goal at the Kansas City 7.

Mahomes was 26 for 35 for 259 yards and threw touchdown passes to Demarcus Robinson and tight end Travis Kelce, who caught a pass in his 125th straight game.

Burrow has 971 passing yards, eight touchdowns and zero interceptions in his last two games. On Sunday, he shattered the franchise record for passing yards in a season (4,611), passing Andy Dalton, who had 4,293 yards in 2013. Burrow also now holds the single-season franchise record for passing TDs with 34 (Dalton had 33 in '13). He has passed for 300-plus yards six times this season, also a Bengals record. He has four career games of 400-plus yards, the most of any player in his first two seasons since Hall of Famer Dan Marino had three in his first two years.

Chiefs: RT Lucas Niang suffered a knee injury in the first quarter and did not return.

Chiefs: at Denver in the regular-season finale next Saturday. Kansas City can still secure the AFC's top seed with a victory and a loss by Tennessee, which plays at Houston next Sunday.

Bengals: finish next Sunday at Cleveland.