Bills continue to show why they deserve to be AFC favorites 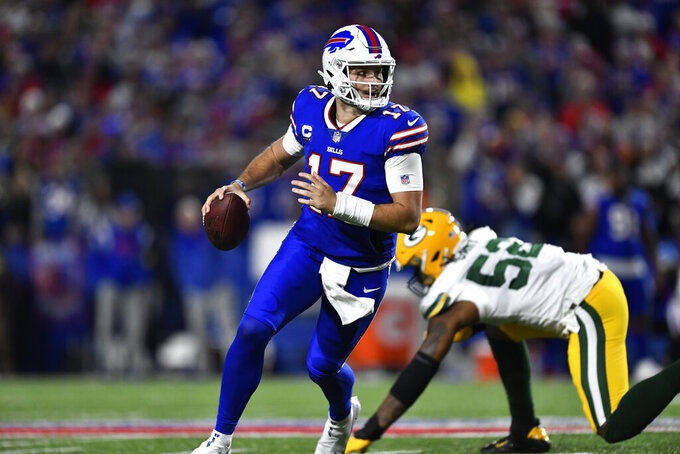 ORCHARD PARK, N.Y. (AP) — No one can accuse the Buffalo Bills of padding their record with weak opponents this season.

A year after taking advantage of a schedule in which they went 7-2 against teams parading out quarterbacks with 16 or fewer starts, the Bills have earned the right to be leading the AFC at 6-1.

As for the caliber of quarterbacks the Bills have defeated, consider this: Their four-game winning streak features victories against the NFL’s past four MVP winners in Kansas City’s Patrick Mahomes (2018), Baltimore’s Lamar Jackson (2019), and Green Bay’s Aaron Rodgers (2020 and ’21).

The Bills, by no means, have been flawless.

They withered in the south Florida heat by squandering a fourth-quarter lead in a 21-19 loss to Miami last month.

In a 27-17 win over Green Bay on Sunday night, the Josh Allen-led offense followed an efficient first half in building a 24-7 lead by essentially taking its foot off the gas. Rather then secure the win, Allen threw interceptions on consecutive fourth-quarter possessions in allowing the Packers to threaten to pull within one score before Mason Crosby’s 55-yard field goal attempt sputtered wide left in the final minute.

Allen was disappointed in himself by calling the two interceptions “stupid mistakes.”

“It’s a tough feeling to go into that. Again, some bad decisions on my part,” Allen said.

Buffalo’s defense has its own issues to clean up after allowing season highs in yards against (398), yards rushing (208) and letting the Packers convert 50% of their third-down chances (6 of 12).

What’s telling, however, is how the the Bills have played complementary football in getting key plays in clutch moments to match their best start through seven games since 1993.

Allen has already engineered two game-winning drives in the final two minutes in beating Baltimore and Kansas City after failing to do so once last season.

And the defense has forced key fourth-quarter turnovers in wins over Baltimore, Kansas City and Green Bay, with linebacker Matt Milano picking off Rodgers’ tipped pass from Green Bay’s 47 with 12:29 left, and a play after Allen threw his first of two interceptions.

These are the types of performances that should embolden the confidence of a team that entered the season with Super Bowl aspirations, and enters a second-half stretch in which the Bills have five games left against division opponents, and showdowns against Minnesota (6-1) on Nov. 13 and the defending AFC champion Cincinnati (4-3) on Jan. 2.

Prized offseason addition veteran pass rusher Von Miller was pleased but not surprised to be informed of Allen being unhappy with his performance following a win.

“That’s Josh. He’s a true competitor. He wants to be perfect each and every time that he goes out there. And he did enough to win for us today,” he said, before suggesting Allen and everyone else shouldn’t be too hard on themselves.

“We’re kind of spoiled,” Miller said, referring to three of Buffalo’s wins decided by 21 or more points. “You just want to put your foot on guys' necks and go 40 points every game. But the reality of it is, you just want to get the win.”

The Allen to Stefon Diggs connection. Diggs ran up the right sideline and burst past cornerback Rasul Douglas before curling back to be in perfect position to catch Allen’s 26-yard touchdown pass for a 14-0 lead. Allen essentially threw the ball to a spot in trusting Diggs’ ability to get there for his seventh TD of the season.

Run defense. The Bills were late making adjustments against the run in anticipating the Packers would turn to the passing attack in the second half. Green Bay, however, mostly stuck to the ground in the final two quarters in which it gained 115 yards rushing.

DT Tim Settle. Overshadowed by Miller and DT Ed Oliver, the offseason free-agent addition continued his solid start to the season with his first sack of the year and tipping Rodgers’ pass, which led to Milano’s interception.

WR Gabe Davis. Buffalo’s No. 2 receiver had an off day while managing just two catches on seven targets for 35 yards.

S Jordan Poyer's status is uncertain after he hurt his elbow in the fourth quarter. ... Milano sustained an oblique injury. ... Coach Sean McDermott announced the team intends to activate CB Tre'Davious White from the physically unable to perform list this week, though it's uncertain if he'll play at the New York Jets on Sunday.

6-0 — The Bills' record coming off a bye under McDermott. Only two other NFL coaches have had a more successful start to their careers following bye weeks: Andy Reid was 13-0 and Don Shula 7-0.

A trip to the Meadowlands for Buffalo’s first of two meetings against the Jets (5-3). The Bills have won each of their past four meetings.