Bills GM Beane refuses to be cornered on drafting cornerback 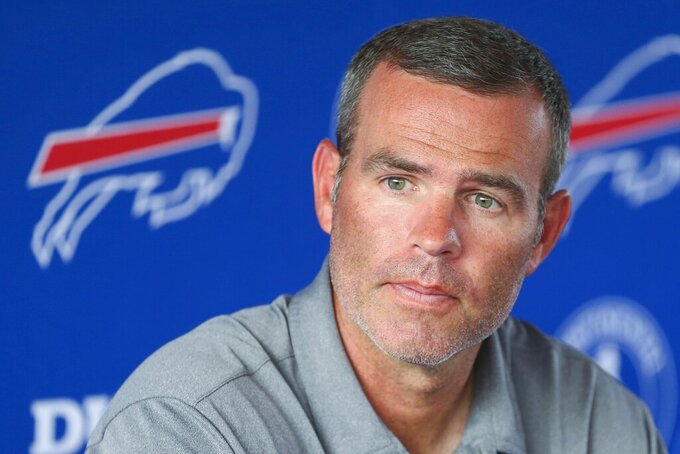 FILE - Buffalo Bills general manager Brandon Beane appears during an NFL football news conference Aug. 6, 2021, in Orchard Park N.Y. If the prevailing belief has the Bills leaning toward selecting a cornerback with their opening pick of the NFL draft, Beane refuses to get boxed into a corner. (AP Photo/ Jeffrey T. Barnes, FILE)

ORCHARD PARK, N.Y. (AP) — If the prevailing belief has the Buffalo Bills leaning toward selecting a cornerback with their opening pick of the NFL draft, Brandon Beane refuses to get boxed into a corner.

The Bills general manager danced around the line of questioning regarding the position by insisting he has many other depth needs to fill when Buffalo is scheduled to make the 25th selection on Thursday night.

“I get the question. I’m not saying you’re out of line,” Beane said of the cornerback spot, which lost starter Levi Wallace to free agency last month and uncertainty over when starter Tre’Davious White will be ready after having major knee surgery in November.

Beane defended his stance by referring to the headline-grabbing, free-agent addition of Von Miller last month. Upgrading Buffalo’s middling pass rush with Miller’s imposing presence should theoretically take the pressure off the secondary from having to hold up in coverage.

“If you’re strong up front, you can help your back end,” Beane said. “That was the focus there. We could have gone less on the D-line and ... maybe go target a higher-end corner. But it just felt like this was the best path, and hopefully, it’ll prove to be the right move.”

By reducing the need at cornerback, Beane now has flexibility to add depth at other positions to the two-time defending AFC East champions, and focus on sticking to the team’s draft board rather than having to reach for a player.

Receiver becomes an option behind starters Stefon Diggs and Gabriel Davis, and after Cole Beasley was cut for salary cap reasons, and with Emmanuel Sanders still contemplating retirement. Safety enters the mix especially with Jordan Poyer entering the final year of his contract and the Bills hard-pressed to extend his deal because of salary cap constraints.

Linebacker could also be a possibility with Tremaine Edmunds on the fifth and final year of his rookie contract.

Beane isn’t providing hints in part because of how low the Bills are selecting and the uncertainty of how many quarterbacks might be chosen in the first round, thus pushing other positional players further down the order.

Beane revealed the Bills have first-round grades on fewer than 32 players, leaving him potentially having to make a choice to trade back or use a combination of Buffalo’s eight selections to move up.

“Who are we picking?” Beane said in opening his pre-draft news conference. “I would love to know.”

They join a young developing core of defensive linemen, who include A.J. Epenesa, a second-round pick in 2020, and Greg Rousseau and Boogie Basham, Buffalo’s first two picks in last year’s draft.

The focus on improving the pass rush comes after the Bills were inconsistent in applying pressure last season. Buffalo finished tied for 11th in the NFL with 42 sacks, though 14 of them came in the final two weeks of the season in wins over Atlanta and the New York Jets.

Miller wasted few words upon being asked to introduce himself to his new teammates upon arriving for the start of voluntary workouts this week.

“I stood up and told them, `I’m Von Miller from Texas A&M and I play defense,” he said. “Whatever you guys need me to do I’ll get it done.”

The Bills have never selected 25th in the NFL draft. They picked 25th three times in the American Football League draft in selecting tackles Stew Barber in 1961 and Randy Jackson in ’66. Defensive back Butch Byrd, chosen in 1964, was Buffalo’s most notable player drafted 25th.

Byrd, who still holds the Bills record with 40 interceptions, was a five-time AFL all-star and selected to the franchise’s 50th anniversary team in 2009.

In calling Poyer an “integral part of our defense,” Beane stopped well short in suggesting he’s open to extending the contract of a player who turns 31 next week, though coming off his first All-Pro season.

“I’m not upset or anything. You want everybody to be happy and thrilled with their contract,” Beane said. “I doubt every employee is walking around here high-fiving their boss going, 'I love all the money,’ you know what I mean? It’s just part of the business and you can’t let it get you down.”