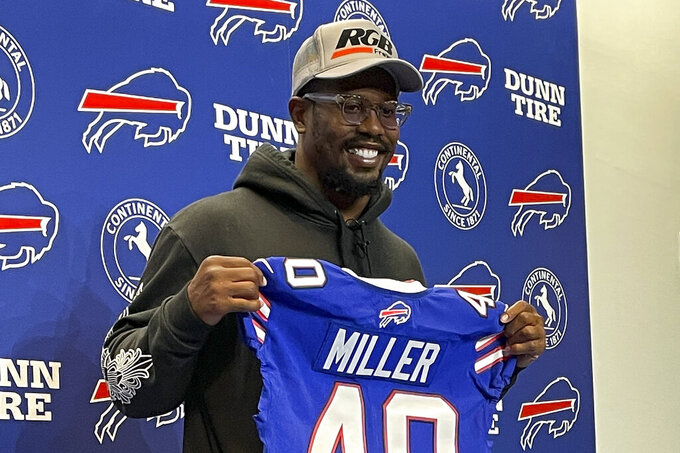 Von Miller holds up a Buffalo Bills jersey during a news conference Thursday, March 17, 2022, in Orchard Park, N.Y. Miller was introduced as the Bills' prized free-agent addition, a day after agreeing to terms on a six-year contract. (AP Photo/Mark Ludwiczak)

ORCHARD PARK, N.Y. (AP) — To say the Buffalo Bills are happy to have landed a prized free agent like Von Miller would be an understatement.

With one notable exception, nearly everything has gone swimmingly for the Bills in an unexpected and surprising spending spree to open free agency. Even Beane, who spoke Friday about Buffalo’s various comings and goings, said he wasn’t necessarily expecting to land a big fish like Miller in free agency.

“I don’t ever plan to be a big spender,” Beane said. “I want to build and grow our own. But I’m never going to shy away from seeing if there’s something there. ... If I do see the opportunity to land someone that I believe can help us at a critical position, I’m gonna take a swing.”

The Bills officially signed Miller, one of the top pass rushers in the NFL, to a six-year deal on Thursday. That’s not the only splash the Bills have made along the defensive line. They’ve also added a trio of veterans at the defensive tackle position — DaQuan Jones, Tim Settle and Jordan Phillips — and officially brought back defensive end Shaq Lawson on a one-year deal Friday.

Lawson, like Phillips, spent several years in Buffalo before departing in 2020. Lawson entered the NFL as a first-round pick of the Bills in 2016.

“It’s great to get those guys back,” Beane said. “We didn’t want to see them leave. You want to pay them all. I remember when they both left two years ago, we hated it but we knew it was inevitable to probably lose one and maybe both. And it’s exciting to see them back.”

One player the Bills did not get to sign on the dotted line is running back J.D. McKissic. The Bills had verbally agreed to terms with McKissic on Tuesday before the running back changed his mind and decided to return to Washington. Beane was blunt and upfront about his displeasure with the Washington organization over how that process turned out.

“That was tough,” Beane said. “Obviously, he was a guy we targeted and in this business, in general, when you have an agreement, it’s good. But until there’s ink on the paper ... and his agent did a great job. Doug Hendrickson and CJ LaBoy did a great job. There were some things that went down with the other organization, which is painful, but they chose to do what they did and I couldn’t stop it.”

“I’ve had it before where the agent has agreed with you on something and then someone else calls and says, ‘Hey, what if I add a million dollars? Or what if I do this? What if I guarantee this?’ Once you have an agreement, the agent’s supposed to say it’s over. And this agent did that. And this agent told the other club it’s over. But the other club didn’t back off.”

Beane has connections with key members of the Washington organization from his time with the Carolina Panthers, having worked with coach Ron Rivera and vice president of football/player personnel Marty Hurney in Carolina.

Asked if those relationships complicated things, Beane replied: “Yeah, it does.”

Beane also touched on the release of wide receiver Cole Beasley. Beasley had been an important part of Buffalo’s offense over the past three seasons, but his production dropped in 2021 and he had received criticism for his vocal anti-vaccination stance. The Bills had given Beasley permission to seek a trade before eventually releasing him.

“Cole was a big part of our success,” Beane said. “He did some really good things here. I think the Covid thing, we all know he had a strong stance and I think it was tough on him, it was tough on his family. Not everyone agreed with some of his comments or his viewpoints ... he just felt that maybe a change for he and his family would be best. ... Ultimately we also needed the cap space at that point and we decided once we made some of these moves that it was time to let him see if he could find a different spot.”

The Bills are still in the market for a backup quarterback but aren’t expected to make any more expensive additions in free agency due to the salary cap. Beane said that the Bills are up against the cap at the moment.