Bills offense comes up short in 24-17 loss to Ravens 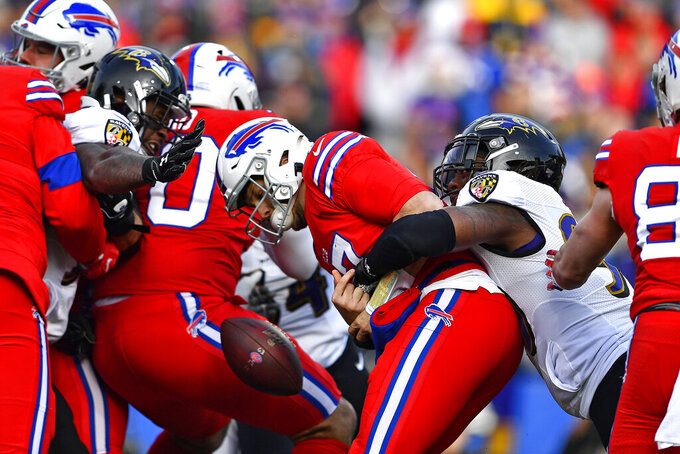 Buffalo Bills quarterback Josh Allen, center, has the ball knocked loose as he is hit by Baltimore Ravens outside linebacker Matt Judon (99), right, during the first half of an NFL football game in Orchard Park, N.Y., Sunday, Dec. 8, 2019. The fumble was recovered by Ravens defensive end Jihad Ward. (AP Photo/Adrian Kraus)

The Josh Allen-led offense still has plenty of work to do.

In holding Lamar Jackson and the bulldozing Baltimore Ravens to a season-low 257 yards, Allen and the Bills offense lacked finish in a 24-17 loss on Sunday.

“We were right there,” guard Jon Feliciano said. “We need to learn from it, but we’ve got to play better. That’s really it. We have three more games, still fighting for a playoff spot.” While the win helped the Ravens (11-2) become the AFC's first team to clinch a playoff berth, the Bills (9-4) were unable to build off a three-game winning streak and following a convincing win on Thanksgiving Day over the Dallas Cowboys.

Despite the loss, the Bills are still in control of their playoff future as they continue to hold down the first of the AFC's two wild-card spots.

“We've got to learn from some things that happened today to ultimately make us a better and stronger football team moving forward,” coach Sean McDermott said.

It was the Bills' offense that ultimately disappointed in game that had the intensity and feel of a playoff matchup.

Though Allen eventually responded by leading a seven-play, 78-yard touchdown drive to cut Baltimore's lead to 24-17 with seven minutes left, the offense came up empty on its final drive.

Despite benefiting from two personal fouls and a pass interference penalty against Baltimore, the Bills failed to reach the end zone. Facing fourth-and-8 at the Baltimore 16, Allen stood in the pocket and sent a pass over the middle intended for John Brown only to have cornerback Marcus Peters break it up at the goal line with 63 seconds remaining. “I have to find more completions early on, take what they give us,” Allen said. “Maybe felt like I was pressing a little bit when they were bringing some good pressures that we maybe hadn’t seen ... at the end of the day we didn’t make enough plays.” Allen finished 17 of 39 for 146 yards, with a touchdown to Cole Beasley and a lost fumble. He was sacked as season-high six times, while Buffalo finished with 209 yards — the team's fewest since it had 145 in a 22-0 loss at Green Bay in Allen's third career start last year. “We feel like we’re letting our brothers down,” said rookie running back Devin Singletary, who ran for 89 yards on 17 carries. “We made some mistakes today that cost us.” The offensive struggles spoiled a lights-out performance by the Bills defense, which largely held star quarterback Lamar Jackson and the Ravens offense in check. Jackson had three touchdowns passing and 145 yards with a large chunk coming on a 61-yard game-breaker to Hayden Hurst to open the second half. The dynamic Jackson was also limited to 40 yards rushing, his second-lowest rushing total of the season.

The Ravens punted a season-high seven times after managing just 24 through their first 12 games.

“We have to figure out how to take that next step as a football team,” linebacker Lorenzo Alexander said. “Because we’re a good football team, but in order to be great or elite and really be able to play for a championship you have to be able to beat the Ravens, the New Englands, those caliber of teams if you want to find yourself where you want to as far as hoisting up a Lombardi (Trophy).”

If the Ravens were a measuring stick, Alexander remains encouraged. “The gap isn’t big. You look at today, it’s probably three plays in the game where this game shifts big time," Alexander said. "It’s not like it’s this big reach that we’re looking for. We’re right there. The thing is to just to learn from this.”