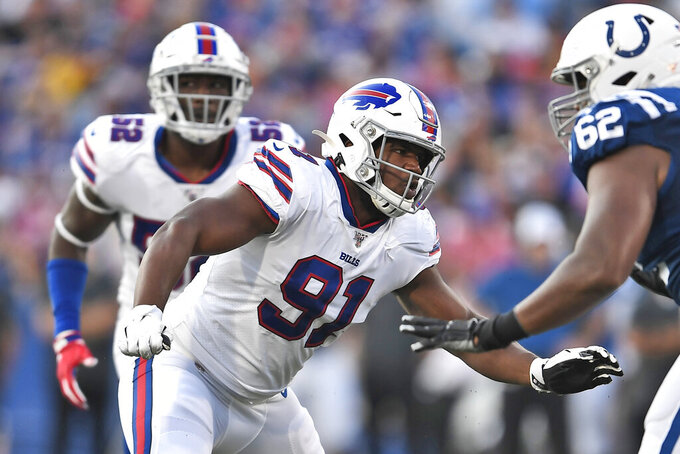 ORCHARD PARK, N.Y. (AP) — Wherever Kyle Williams went, Ed Oliver could usually be found at his side.

On the sideline. Walking to and from practice. In meetings.

If the Buffalo Bills drafted Oliver with the expectation to replace Williams at defensive tackle, who better than having the just-retired player pop in at training camp and provide the rookie a weeklong crash course.

Oliver happily referred to Williams as being his "cheat code" to the NFL.

"A guy who played 13 years, the knowledge fresh on his mind? He was able to help me out a lot," the first-round pick out of Houston said, referring to Williams' visit three weeks ago. "I gained that much more in a couple of days than I had in probably months sometimes in college."

That's saying plenty, considering Oliver was the school's first three-time All-American, was the 2017 Outland Trophy winner, awarded to the nation's best interior lineman during his sophomore season, and regarded highly enough by Buffalo to be selected ninth overall.

What college couldn't teach a comparatively undersized lineman such as the 6-foot-1, 287-pound Oliver was how to prepare to match up against larger, more physical NFL opponents. And that's where Williams came in, given how the 6-1, 300-pound player overcame questions about his size to earn six Pro Bowl selections over a career in which he started 178 games.

Where taller and heftier tackles can lean on their brute strength to overpower opponents, smaller linemen need to also rely on leverage and footwork.

"Just the little knicks and knacks that Kyle brought to me, that's when I learned the most," Oliver said. "And the next week, it was kind of, 'All right, go fly. I showed you where to fly, go fly.'"

It was the least Williams could do.

"It kind of naturally came about," Williams recalled, saying the idea first came up when he congratulated Oliver on being drafted by Buffalo.

"I think he's got an elite skillset. He's got a great temperament for the position. And he's forming fantastic habits. I think he's going to be a special player."

It might not be a coincidence that Oliver has made significant strides since Williams' visit.

Oliver memorably closed that week of practice by throwing aside 331-pound lineman De'Ondre Wesley during a team drill. The following week, he was promoted to working exclusively with the starters.

In his preseason debut, Oliver didn't make the stat sheet, but was part of a defense that limited the Indianapolis Colts to a combined 29 yards and one first down on their first six possessions. Last week at Carolina, he batted down Kyle Allen's pass on third down to end the Panthers' opening drive.

"I can see how quickly Ed has kind of picked up things and just grown," defensive end Jerry Hughes said. "It's light years compared to what we were doing here in the spring."

"He was hanging on every word," he said. "We'll hopefully keep those two guys in touch."

What's more, Frazier noted how Oliver has begun letting down his guard and becoming more comfortable with his teammates.

"There was a period where the wall was up," Frazier said. "But you can see that guard coming down now, and you can see that he's listening to those guys along with what his coaches are saying, and it's helping him. So that means that there's a comfort level beginning to set in a little bit."

The 21-year-old Oliver isn't sure if it was a case of him being aloof as opposed to trying to find a way to fit in among a group of veterans, some 10 and 15 years older.

"They've got kids, they've got things different things on their plate than I have, and I'm a guy that came out as a junior, so just the gap between ages," Oliver said. "Hanging around the guys, you get more comfortable. It's football life in the locker room, shooting the (stuff) with each other, and they've just become my family."

One thing's for sure is Oliver doesn't lack is confidence.

Days before Buffalo's preseason opener, Oliver was asked if he'd take a moment to reflect on how far he's come.

Reminded this week of what he said as Buffalo prepares to play at Detroit on Friday, Oliver referred to his size as a reason he feels the need to show confidence.

"I'm not a big ol' guy," Oliver said. "I don't look like I can beat the world, but that's what I'm asked to do. So you've got to have a little swagger about you."