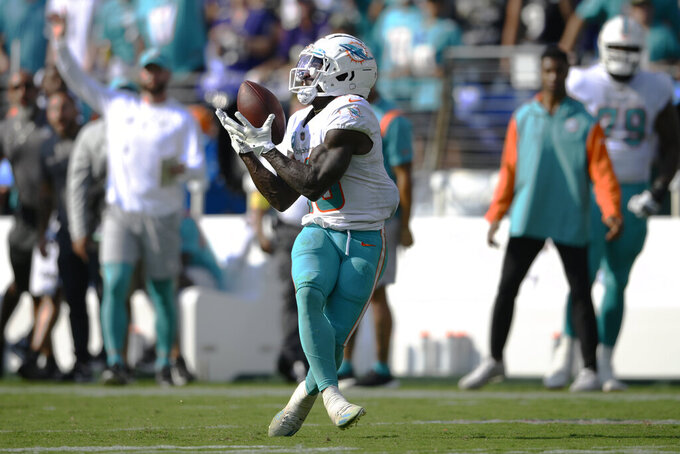 Miami Dolphins wide receiver Tyreek Hill (10) catches a pass for a touchdown during the second half of an NFL football game Baltimore Ravens, Sunday, Sept. 18, 2022, in Baltimore. (AP Photo/Nick Wass) 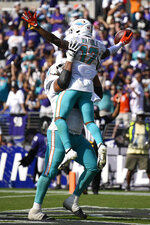 ORCHARD PARK, N.Y. (AP) — Kaiir Elam has lost track of just how many friends and family members will be at Sunday’s game against the Miami Dolphins.

“So many I can’t even count,” Elam said.

The homecoming for Buffalo’s first-round pick has the potential to be both special and quite the test. With a rash of injuries affecting Buffalo’s secondary, it could be Elam and fellow rookie Christian Benford who will be tasked with containing Miami’s receiver combo of Tyreek Hill and Jaylen Waddle in a pivotal AFC East matchup.

“This is what you work hard for,” Elam said. “This is what you lock in and focus for because these opportunities don’t come by very often to a lot of people. I have every game circled, but this is one, close to home, I just look forward to it a lot.”

Three of Buffalo’s four starters in the secondary did not practice on Thursday. Dane Jackson was taken off the field in an ambulance on Monday with a neck injury, though later tests showed no major damage to his neck or spine. Safety Micah Hyde also left Monday’s game with a neck injury, and safety Jordan Poyer missed Thursday’s practice with a foot injury.

And that’s not even factoring in Buffalo’s top cornerback, Tre’Davious White, who opened the season on the reserve/PUP list as he makes his way back from a torn ACL. White isn’t eligible to begin practicing with the team until after Week 4.

Both Elam and Benford have performed well to begin their pro careers, though their distribution of playing time has been a surprise. Benford, a sixth-round pick out of Villanova, has started each of Buffalo’s first two games alongside Jackson. The Bills have then used a rotation between Benford and Elam as the games have progressed.

“They’ve done a really good job of understanding the game plan and then being able to go out and execute it both in practice and the games,” defensive coordinator Leslie Frazier said. “That’s always a good sign. And the production that they’ve given us, the games haven’t been too big for them. So if it comes to that, where they would have to both start, we’d be confident with both of them out there for sure.”

It’s been smooth sailing for Buffalo’s pass defense to open the season, with new additions such as defensive end Von Miller helping to lead the way. The Bills held Ryan Tannehill to 117 yards passing, two interceptions and a 32.7 quarterback rating in Monday night’s 41-7 blowout victory.

In Week 1, the Bills picked off Matthew Stafford three times on their way to a 31-10 rout.

The revamped Dolphins offense will present a clear challenge to the banged-up secondary. Hill and Waddle combined for 261 yards receiving and each scored two touchdowns in a 42-38 win over Baltimore.

Tua Tagovailoa is coming off a career game where he threw for 469 yards and six touchdowns.

“They always, at least the last couple of years that I can remember, have had a talented roster and now they add Tyreek Hill to that on the offensive side and they’re playing at a high level,” Bills coach Sean McDermott said. “The speed component to their offense is as good as there is out there.”

The injury news wasn’t all bad for the Bills on Thursday. Wide receiver Gabriel Davis said he’s “100 percent” optimistic that he’ll play Sunday after missing Monday’s game with an ankle injury. Linebacker Matt Milano was a full participant at practice after suffering a stinger against the Titans. Defensive tackle Ed Oliver (ankle) appears to be getting closer to a return and was limited at practice.

NOTES: The NFL announced that offensive lineman Bobby Hart’s one-game suspension was upheld by hearing officer Derrick Brooks. Brooks was appointed by the league and the NFLPA to handle Hart’s appeal. Hart was suspended for taking a swing at a Titans player and instead striking a Tennessee coach following Monday’s game.