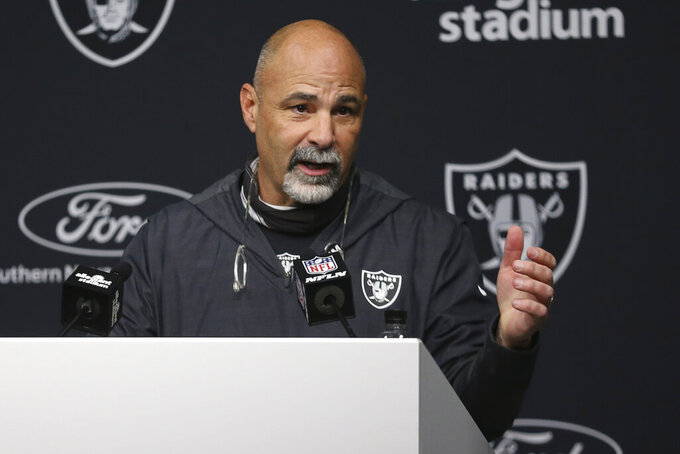 He took over as Las Vegas interim head coach following Jon Gruden’s midseason exit last fall and steered the Raiders to their first playoff berth in five years. Now he’s back in an assistant coach’s role facing another major challenge, revamping a special teams unit that has ranked among the league’s worst for multiple seasons.

“If you can get good people at a great place, then magic can happen,” Bisaccia said Tuesday. “We’re going to look in every nook and cranny to see what we can do to make ourselves better.”

Bisaccia, the Packers’ third special teams coordinator in as many seasons, will try to upgrade a group that drew the brunt of the criticism after Green Bay’s 13-10 NFC divisional playoff loss to the San Francisco 49ers.

The Packers allowed the tying touchdown on a blocked punt that night, had a field-goal attempt blocked just before halftime, and only had 10 men on the field when San Francisco’s Robbie Gould kicked a winning field goal as time expired. Maurice Drayton was fired as special teams coordinator after the season.

Green Bay’s kick teams woes began long before that game, though. The Packers ranked last in the NFL in special teams, according to Football Outsiders’ efficiency metrics.

“The level of (special teams) play that we had was not acceptable,” general manager Brian Gutekunst said earlier in the offseason. “It’s got to get better. And it’s been that way for a little while. So getting Rich was a big part of that.”

Bisaccia had 20 seasons of experience as a special teams coordinator before getting his surprise assignment to become Las Vegas’ interim head coach. The Raiders went 7-6 under Bisaccia and lost in the wild-card round of the playoffs to the Cincinnati Bengals.

A number of Raiders players recommended that Bisaccia get the permanent head coaching assignment, which instead went to New England Patriots offensive coordinator Josh McDaniels. Bisaccia kept the focus on his current assignment Tuesday when he was asked about the Raiders' decision or how confident he might have felt about getting that job.

“Last year was a unique year in my personal career, and certainly with the players and coaches that went along with it,” Bisaccia said. “A lot of credit to the coaching staff I was involved with and the way in which the players approached every day and what they dealt with. But I’m here in Green Bay. I’m excited about what’s happening here today.”

The Packers believe Bisaccia’s spirited approach can provide a necessary boost to their special teams.

Packers coach Matt LaFleur called Bisaccia a “fiery dude” while raving about him during the league meetings last month. LaFleur said Bisaccia could “kind of change the culture” of their special teams.

“We use the phrase around here, ‘We-fense,’ “ Bisaccia said. “It’s not really offense. It’s not really defense, it’s kind of we-fense. It’s us. There’s no other place on the field except for the punt team where you can find a linebacker lined up next to a tight end lined up next to a safety, and the running back is the personal protector making all the calls. That’s the only the place you find that on the field.”

The Packers have made some roster moves aimed at improving their special teams. Green Bay signed free-agent cornerback Keisean Nixon, who played for Bisaccia with the Raiders and had a team-high nine tackles on special teams his rookie year of 2019.

Gutekunst has indicated O’Donnell’s holding skills contributed to the Packers’ decision to sign him over Bojorquez, who had a slightly higher gross and net average last season. Holding issues got part of the blame last season when Mason Crosby made 73.5% of his field goals, his lowest percentage since 2012.

But the biggest change to Green Bay’s special teams is the guy in charge and the mentality he brings.

“We don’t get three downs to get it right,” Bisaccia said. “We have one play to make a difference, and they have to understand the significance and the criticalness of that particular play. And I think if we can get that across, we’ll play better.”