Bless Austin corners the market on confidence for Jets 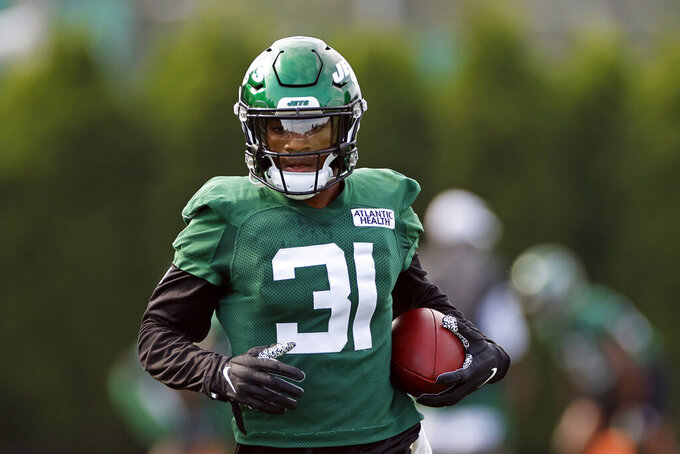 FLORHAM PARK, N.J. (AP) — Bless Austin has a strong message for anyone who thinks the New York Jets are weak and inexperienced at cornerback.

“I come to camp looking forward to get my next contract,” Austin said after practice Monday. "I don't worry about who's starting. I don't worry about none of that. I mean, I think I'm the real deal. There ain't no secret in that. Click the tape and press play, you know?

"Of course, I make mistakes, but there's also a lot of plays I've made on that field that other corners in this league aren't making."

It's a bold statement by Austin, heading into his third season after being a sixth-round pick out of Rutgers in 2019. But it's hardly a surprising one.

He is 25 and brimming with confidence. It's what drives him to be better. And it's what has allowed him to come back from the knee injuries that stole most of his final two college seasons, caused him to slip down the draft boards and delayed his NFL debut in his rookie season.

It has also helped him tune out the naysayers who insist the Jets need to bring in a veteran cornerback to boost the secondary.

“I ignore that, honestly,” Austin said. "I mean, I've got my teammates, I've got my brothers with me. I don't pay attention to outside noise. People are always going to say what they've got to say. At the end of the day, I’m between them white lines and I know what I’m about. And other people in the league who I've guarded know what I’m about as well. So I just let people do their talking.”

Austin is projected to start at cornerback along with Bryce Hall, a fifth-rounder last year after an ankle injury cut short his last season at Virginia. Beyond the two of them, the Jets have little experience at the position. But general manager Joe Douglas and coach Robert Saleh have shown confidence in both to be the answers to the cornerback conundrum.

“A lot of people forget me and Bryce were highly rated dudes coming out of college,” Austin said. “You know, we just fell short (due) to injury. So I feel like that’s something that a lot of people forget, you know, and there’s a reason why they didn’t bring a veteran in here, not to knock any veteran corners that may be out there. But there’s a reason why — they see something in us.”

Saleh has been happy with Austin, who has been having a solid training camp. Austin has played in 18 games over his first two seasons, showing flashes of playmaking ability while also having a few breakdowns — typical of a young NFL cornerback. But it's his attitude that has set him apart.

“Bless, he’s got a dog’s mentality, from a football sense,” Saleh said. “He is absolutely fearless.”

Saleh, who has coached the likes of Richard Sherman, Jason Verrett and Emmanuel Moseley in San Francisco, likes Austin's aggressive approach at the line and the ability to quickly move from one play to the next.

“It’s just those attributes — the length, the strength, he’s fast enough,” Saleh said. “It’s just a matter of working the technique and understanding where you work in the defense. He’s shown everything that we want. It’s just a matter of trying to get better and see what he looks like once we get with other opponents.”

The defensive line is considered the overwhelming strength, a group led by Carl Lawson and Quinnen Williams that could provide enough push up front to help offset shortcomings in the secondary.

Not that Austin wants to hear any of that, of course.

“I want them to look at us as somebody to lean on, rather than the other way around.”

NOTES: OT George Fant began camp on the reserve/COVID-19 list after testing positive for the coronavirus, but was activated late last week and is now practicing. Fant said he became ill between his first and second vaccination shots but was able to continue working out on his own while away from the team. ... Saleh said DL Quinnen Williams remains on track to return next week before the preseason opener at Green Bay after offseason foot surgery. ... OL Cameron Clark, hospitalized last Tuesday with a bruised spinal cord, continues to be evaluated and there's no timetable on his return. ... LG Alijah Vera-Tucker, the No. 14 overall pick, remains day to day with a pectoral injury but could return next week. ... The Jets claimed OL David Moore off waivers from Carolina and waived OL Teton Saltes, who injured a knee during the team's scrimmage Saturday. Moore, who signed with the Panthers as an undrafted free agent out of Grambling State, was waived Sunday.