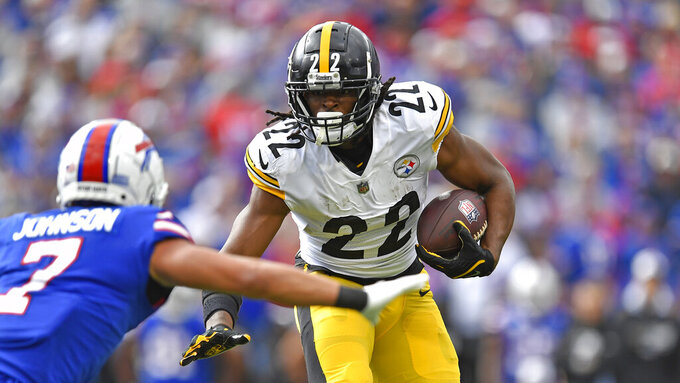 PITTSBURGH (AP) — Tom Brady, by his own estimation, has faced the Pittsburgh Steelers “a lot.”

And it's not just Brady's jersey that'll be different this time around when he walks onto the Acrisure Stadium (formerly Heinz Field) turf for the first time on Sunday as a member of the Tampa Bay Buccaneers. It's the team on the other side of the line of scrimmage, too.

The Ben Roethlisberger-led version of the Steelers that Brady played so often with so much on the line during his long run in New England is long gone, replaced by a group that is hurting physically and mentally.

Dropping four straight games and being on the wrong end of the franchise's worst loss in 33 years — as Pittsburgh was last week in Buffalo — will do that.

“When it’s that bad across the board, it starts with me,” Steelers coach Mike Tomlin said. “We don’t need to seek comfort because there’s enough blame to go around. We need to be solution-oriented.”

That's been difficult for Pittsburgh even in the best of times when Brady is on the opposing sideline.

Brady is 12-3 in his career against Pittsburgh, many of the victories coming in high-pressure circumstances with playoff seeding or seasons on the line. Not so much this time. The Buccaneers (3-2) are trying to find a rhythm following an uneven opening stretch while the Steelers are simply trying to find a competent brand of football.

“(The Steelers) didn’t play the way they’re capable of at Buffalo,” Brady said. “I’m sure they’ll be ready to go.”

There's little doubt Brady will be, even at 45. Even with 321 career starts under his belt. Even with his personal life making as much news recently as his professional one. Brady currently leads the NFL in completions, has thrown seven touchdowns against one interception and remains perhaps the best decision-maker with the ball in his hands in league history.

“He's still Mr. Brady,” Pittsburgh inside linebacker Myles Jack said. “He's still doing his thing. There are only so many things you can show him because he's basically seen every NFL defense since 1990.”

Jack is kidding, but only a little. Brady's been in the league so long that Steelers rookie quarterback Kenny Pickett wasn't quite 2 years old when New England took a flyer on Brady in the sixth round of the 2000 draft.

Pickett will be making his second career start on Sunday, only 320 or so — essentially the equivalent of 20 full seasons — behind Brady.

Just don't expect Pickett to be starstruck. He showed plenty of fight during an otherwise forgettable afternoon in Buffalo, going at it with Bills defensive end Shaq Lawson for what he considered a questionable hit in the waning seconds of a blowout.

Brady wouldn't have it any other way.

Pittsburgh's pass rush has essentially evaporated with star outside linebacker T.J. Watt out indefinitely. The Steelers have three sacks in their last four games with Watt watching from the sideline.

So they're not particularly worried about what would constitute a roughing-the-passer penalty against Brady, who drew a critical flag from Atlanta's Grady Jarrett for a fairly innocuous hit late in Tampa Bay's victory last Sunday.

“We understand the initiative that is player safety, particularly at the quarterback position,” Tomlin said. “If you’re not coaching (the) defensive line in that spirit, you’re not upholding your end of the bargain as a coach.”

While the running backs are having trouble making an impact for Pittsburgh, it's not an issue for Tampa Bay. Brady has made it a point to incorporate Leonard Fournette and rookie Rachaad White in the passing game.

Fournette was targeted a team-high 11 times and had a career-best 10 receptions for 83 yards in last Sunday’s 21-15 win over Atlanta and finished with a touchdown both rushing and receiving. White, a third-round pick out of Nebraska, finished with three catches for 28 yards.

“When Lenny needs a break, we don’t feel like we lose anything putting Rachaad in there,” coach Todd Bowles said. “(White) is ready to play when we put him in there. Tom trusts him. The (offensive line) trusts him. He can catch the ball, he blocks well, he can run the ball. We don’t have a problem putting him in.”

With 19 sacks through five games, the Bucs rank third in the league behind the 49ers (21) and Cowboys (20). Eleven different players have at least one.

“Just getting to the quarterback is good, it doesn’t matter who it is for us,” Bowles said. “A lot of guys sacrifice to get other guys plays. That part of it has been good as far as playing team football.”