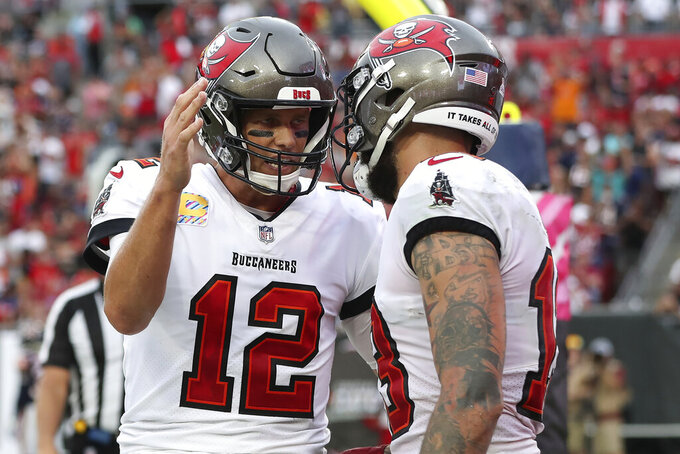 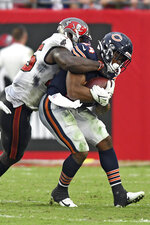 TAMPA, Fla. (AP) — Tom Brady says he's not one for collecting a lot of mementos documenting his many accomplishments during an unsurpassed 22-year career. Becoming the first player to throw 600 career touchdown passes is pretty special, though.

So after Mike Evans bolted to the stands and handed the ball to a fan after scoring the historic touchdown, the star receiver returned to the sideline to learn he needed to negotiate a speedy return.

“It’s really cool. I got it in the bag over there. Mike gave it away and said: ‘Man, I’m sorry.’ I said, that's all right, I’m sure they’ll figure out a way to get it back," Brady said after the defending Super Bowl champion routed the Chicago Bears 38-3.

“I don’t actually keep too many things. In that circumstance I felt like that might be a good one to keep. He’s going to get something nice in return," Brady added of the fan. "We’ll give him a helmet, a couple of jerseys or something. That was really cool of him to do that.”

The Bucs (6-1) won their fourth straight game for the best seven-game start in franchise history. They also avenged one of their five 2020 regular-season losses, with Brady completing 20 of 36 passes for 211 yards and four TDs.

“I just think about all the guys that shared it with me," the 44-year-old seven-time NFL champion said. "That’s the reality. There’s nothing about this sport that you do by yourself. It’s the ultimate team sport. It challenges you physically, mentally, emotionally every week every day at practice. ... I’m just grateful to have amazing teammates, coaches.

"To be able to do this for as long as I have is a really incredible blessing in my life.”

With Antonio Brown and Rob Gronkowski sidelined by injuries, Evans had a big day with six catches for 76 yards and three TDs, including a 9-yarder that gave Brady No. 600 with 6 seconds remaining in the first quarter.

Evans also had scoring receptions of 2 and 8 yards as the Bucs built the lead to 35-3 at halftime. Chris Godwin had eight catches for 111 yards and a 5-yard reception set up by Delaney’s interception. Rookie Jaelon Darden’s 43-yard punt return led to Leonard Fournette’s early 2-yard TD run.

Fields, meanwhile, fell to 2-3 as a starter. The first-round draft pick finished 22 of 32 for 184 yards and three interceptions. He also lost two fumbles and has now been sacked a league-leading 22 times.

Chicago's turnovers contributed to the Bucs scoring four of their five touchdowns on drives that started inside Bears territory.

“When Tom Brady and that offense start inside the 40 whatever it was, four or five or six times, that’s a lot," Bears coach Matt Nagy said. “It’s advantage them, and they’re going to make you pay for it.”

Brady improved to 7-1 against Chicago, the lone setback a 20-19 loss in a game last October best remembered for ending with the seven-time Super Bowl champion losing track of downs with Tampa Bay trying to move into position to attempt a field goal.

The Bucs didn’t leave anything to chance this time.

Safety Antoine Winfield Jr., back in the lineup after missing two games with a concussion, sacked Fields on the second play of the game, forcing a fumble Chicago recovered. The Bears weren’t as fortunate when Shaquil Barrett and Jason Pierre-Paul got to the rookie, creating a pair of first-half turnovers that added to the young quarterback’s frustration.

Brady played into the fourth quarter, leaving after turning Fields’ third interception into a field goal that put the Bucs up 38-3. Backup Blaine Gabbert finished.

In addition to boosting his regular-season career TD pass total to 602, Brady has now thrown at least 20 TD passes in a season a record 19 times. He’s followed on the list by Drew Brees (17), Peyton Manning (16), Philip Rivers (15) and Brett Favre (15), who are all retired.

Rookie Khalil Herbert rushed for 100 yards on 18 carries for the Bears.

The Bears entered Sunday tied for first in the NFL with 21 sacks. The Khalil Mack-led pass rush was one of the keys to beating the Bucs last year at Soldier Field. However, Chicago didn't get to Brady at all. Tampa Bay has allowed nine sacks through seven games.

The Bears didn't announce any during the game, but played the fourth quarter without DE Bilal Nichols, ejected for throwing a punch late in the third quarter.

Buccaneers: visit New Orleans next Sunday, beginning a stretch of four of five games on the road.