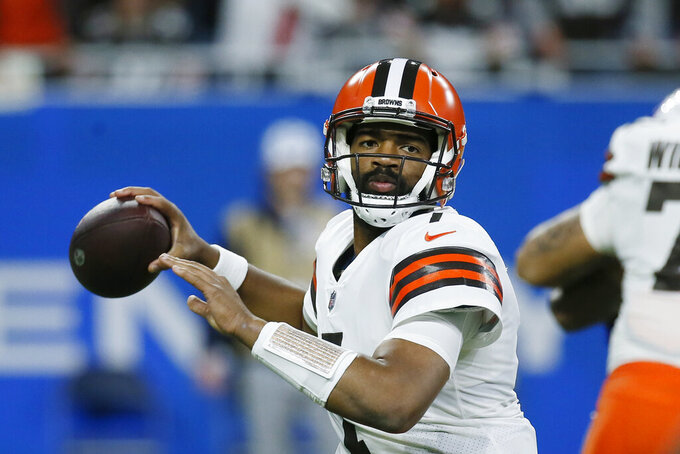 Cleveland Browns quarterback Jacoby Brissett throws during the first half of an NFL football game against the Buffalo Bills, Sunday, Nov. 20, 2022, in Detroit. (AP Photo/Duane Burleson)

CLEVELAND (AP) — Jacoby Brissett began his NFL career as one of Tom Brady's backups — and his shadow.

As a rookie in 2016, Brissett spent one season with the New England Patriots and followed Brady everywhere he went, hoping to learn as much as he could from the best quarterback of all time.

“I was one of those guys that kind of tried to be a sponge,” Brissett said.

On Sunday, Brissett gets to show Brady what he absorbed.

His 11-game stint as Cleveland's No. 1 quarterback coming to an end with Deshaun Watson set to return from his suspension, Brissett makes his final scheduled start for the Browns (3-7), who will host Brady and the well-rested Tampa Bay Buccaneers (5-5).

Brissett was reluctant to talk about his personal finale this week, preferring to stay focused on helping rally the Browns in what to this point has been a disappointing season.

However, the 29-year-old was happy to reflect on his time with Brady, the ageless seven-time Super Bowl winner.

“The best to ever do it,” Brissett said.

Brady was all those things and more to Brissett, who made two starts for the Patriots — and got a Super Bowl ring — before being traded to Indianapolis. That one year had a profound impact on Brissett, who diligently took notes on Brady the person and Brady the player.

He learned attention to detail and how to prepare, lead and embrace the struggle.

Brissett believes Brady's humility may be his biggest strength.

“Everybody looks at him as Tom Brady and he doesn’t think he is Tom Brady,” Brissett said. “I know from the first day I met him, he’s been the same guy. And honestly, he held me to a higher standard than I probably held myself in the beginning of my career.”

Cleary, some of Brady's best attributes rubbed off on Brissett, who has exceeded expectations while filling in during Watson's league-imposed ban, which followed sexual misconduct allegations.

This one belongs to Brissett, and his teammates would like nothing more than to send him out — or at least to the sideline — with a win.

“The No. 1 thing that his teammates have seen about him is the way he prepares,” Browns coach Kevin Stefanski said. “He puts a lot into this game. He's on the field early. He's staying late. He's in this building very early. He's staying here very late. Just constantly working with your teammates. Sending them text messages of videos of routes and ‘Here is how I would like you to run this. Are we on the same page?’”

It wasn't lost on Brissett that his possible last start in ’22 will come against Brady, but that doesn't change anything.

Although he preferred Peyton Manning as a kid, Browns All-Pro defensive end Myles Garrett has become a Brady fan.

Garrett has studied Brady and long admired the intangibles that have made him a consistent winner.

“The guy will fight through whatever he has to — whatever injury, whatever situation, whatever adversity to get a win,” Garrett said. "And, stuff like that, everyone likes to talk about it and not everyone’s about it. He's shown that he is.”

The Buccaneers found their running game in Europe.

Tampa Bay rushed for a season-high 160 yards in its 21-16 win over Seattle in Germany before the bye. The performance was important because it balances the offense, relieving pressure on Brady and his receivers.

“We’re going to need to do that every week, and that’s just the reality,” said Brady, who is 15-5 following a bye. "We’re going to have to control the line of scrimmage and make yards running and make people miss and finish blocks and not get penalties and be balanced.

"The games where we’ve done that we’ve done a really good job. When we haven’t, it’s been a struggle.”

With running back Leonard Fournette nursing a hip pointer, rookie Rachaad White figures to assume a heavier workload for the Bucs.

That comes on the heels of the third-round draft pick rushing for a season-best 105 yards against the Seahawks. He didn't catch any passes, but White ranks second among first-year backs with 20 receptions.

“I’m just a big guy on opportunities," he said. "Eventually everyone is going to get their shot. And when you get your shot, it’s about what you make of it.”

The Bucs have been among the league’s best in run defense since 2019, ranking No. 1 two of the past three seasons. While they haven’t been nearly as effective this year, the unit took a step forward by limiting Seattle to 39 yards rushing — nearly 100 below the Seahawks’ average.

“They’ve been in the top five the last couple of years, and it’s going to be a challenge for our guys — gap control, understanding where we’ve got to be,” coach Todd Bowles said.

Tampa Bay nose tackle Vita Vea missed two days of practice this week with a foot injury and he will likely be a game-time decision.