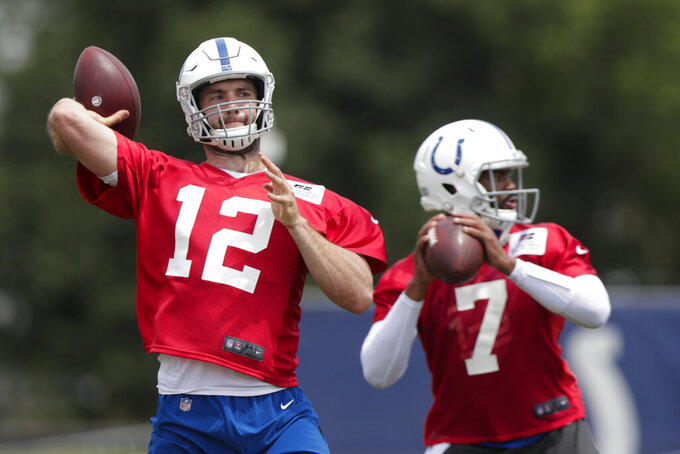 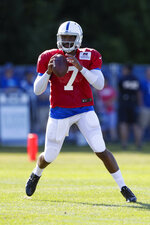 The Indianapolis Colts quarterback routinely celebrates big plays, moves and grooves to the songs blasting through loudspeakers and even periodically tosses in a barrel roll after diving to the ground to simulate a block against the air. It's who he is.

But when it's time to work, Brissett is all business.

The Colts need Brissett to play the tough-guy role right now as Andrew Luck continues to sit out with a strained left calf.

Coach Frank Reich announced Tuesday the injury Luck suffered in the spring would keep his starting quarterback out of action until at least Saturday. Reich also has ruled out Luck for next Thursday's preseason opener at Buffalo and indicated that in a best-case scenario Luck would see only a little playing time anyway in the next two preseason games.

So Brissett probably will take the bulk of the snaps in August, and the timing couldn't be better.

The exuberant 26-year-old enters the final year of his contract having spent more time than Luck with the starting offense.

For the first time in three years, he is not scrambling to learn a new offense. He has developed timing with new receivers Devin Funchess, a free agent signee, and third-round draft pick Parris Campbell. And he has found a personality fit with playful teammates like Funchess and Pro Bowl tight end Eric Ebron.

All of that has made a difference.

"He's done a great job of diving into the playbook," offensive coordinator Nick Sirianni said. "Year 2 of the system, everybody has a firmer grasp of it and nothing's new to anybody and you can really see that in Jacoby with the way the plays come out of his mouth, the way that his eyes read the play and the speed that he gets the ball out with."

Most NFL fans haven't seen much of Brissett since Luck missed the entire 2017 season while recovering from shoulder surgery.

Brissett came to Indy that season in a cutdown weekend trade from New England. Less than two weeks later, Brissett, barely knowing the offense, was forced into relief duty in the Colts' season opener. He wound up starting the final 15 games, throwing for 3,098 yards, 13 touchdowns and seven interceptions despite enduring a league-high 52 sacks.

When Luck returned last season, Brissett went back to the supporting cast. He threw only four passes in four games including the desperation heave from near midfield in the waning seconds of a Week 3 loss at Philadelphia. And with Brissett out of the spotlight, his value around the league took a hit.

Now, with Luck out again, Brissett has another opportunity to showcase his talent on the NFL stage.

Brissett prefers to look at the big picture.

"You've got to make strides, obviously, second year in the system and that's what I hope to do throughout this system," he said. "You'll never see the finished product right now. Everybody understands that."

And after Brissett spent much of last season posing with the defense after turnovers, those in the Colts' locker room have no doubts Brissett can get the job done with or without Luck.

"I think any time a guy gets a lot of reps, that's huge for us as a team," Sirianni said. "Obviously yeah, we want Andrew out there. But when a guy is getting significant reps, getting the timing down with the receivers, the snap count, the cadence and the calls down with the center and the offensive line — I mean that's invaluable. What I think he has really done is gain the trust of everybody in the offensive huddle."