Brockers, Donald back together on Rams' D-line for playoffs 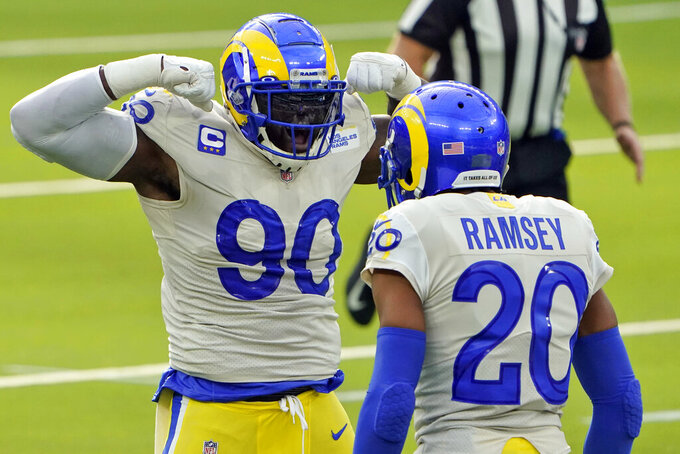 THOUSAND OAKS, Calif. (AP) — Michael Brockers' time away from the Los Angeles Rams was tough on both the defensive tackle and his teammates and coaches, who all rely on their veteran leader for much more than his prowess on the field.

“It just felt like you were alive again,” McVay said. “Brock’s back, and everything’s going to be OK. He just brings life to the group."

Brockers had only just arrived from his coronavirus quarantine, which began on New Year's Eve and lasted right up until before game time. Brockers took a separate flight to Seattle and slept in a different hotel before joining his teammates that morning and playing with no practice in the previous two weeks.

Brockers described the last two weeks as “nerve-wracking,” and he felt his play suffered in the complete absence of practice time. He still played 35 snaps in Los Angeles' 30-20 victory, and he helped to fill the huge gap in the LA defense when All-Pro Aaron Donald went down with a rib injury that shook the Rams.

“At first I was like, ‘Dang, I didn’t know Superman could get hurt,’” Brockers said Wednesday. ”‘Stop playing. Get up. You can breathe.’ ... But we knew we had his back. We have the guys to roll behind him that can come in and make plays. We wanted to definitely make sure he was good, but when you’ve got a guy like that who loves the game, who’s passionate about the game, I have no doubts that he’s going to show up Saturday ready to go."

Donald also thinks he'll be ready to go when the Rams (11-6) visit the top-seeded Green Bay Packers (13-3) for a spot in the NFC championship game. Los Angeles' top-ranked defense will need every bit of its impressive lineup to compete with Aaron Rodgers and the NFL's highest-scoring offense.

Brockers and Donald are close friends who have been playing right next to each other for seven seasons, but Brockers wasn't the only one surprised to see Donald on the sideline. The six-time All-Pro has rarely incurred even minor injuries during his incredible seven-year career, so he was peppered with questions about his health Wednesday in his weekly news conference.

“Man, my damn side is just sore,” Donald said with a laugh. "I'm good, though. I just had a whole workout. Feel strong, feel healthy, so I’m good.”

Donald is staying out of practice this week as a precaution, but the Rams don't stop him from lifting weights and doing agility work as he prepares to chase Rodgers. The Rams realize their success could depend on making the superstar quarterback uncomfortable in the pocket, and the Los Angeles pass rush led by Donald and Leonard Floyd has been one of the NFL's best all season long, with the Rams' 53 sacks second only to Pittsburgh.

That doesn't make this experience any less weird for Donald, however.

“In my whole career, I’ve never had a real injury," Donald said. “This is the first, but I'm good. Just being cautious, being smart and making sure that come game day, I’m ready to go.”

The Rams' defense is built around Donald's effectiveness in every aspect of the game: Even though Donald typically faces more double-teams than nearly any player in recent NFL history, his teammates have taken advantage of that preoccupation on a unit that led the NFL in points allowed, first downs allowed and yards passing allowed, among other superlatives.

“You know that the offense is looking at him, they’re looking for him and they’re worried about him,” Brockers said. “For the most part, having him in the game is almost like having a decoy, because you know the offense is going to be looking for him, and now you can do off-schedule stuff away from him. Having him on the field is definitely going to be very important for us to get our job done.”