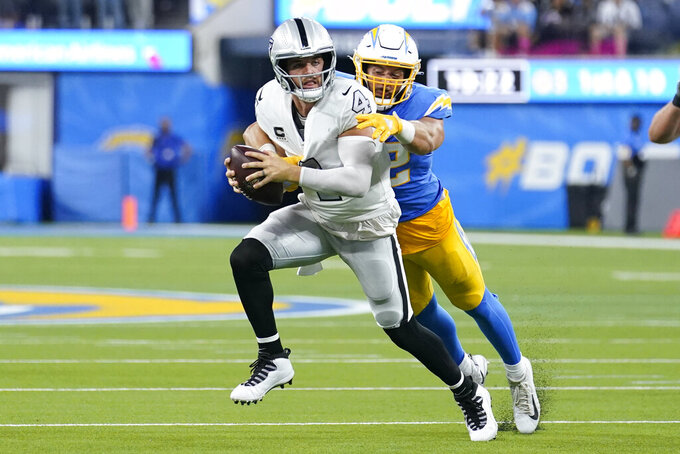 HENDERSON, Nev. (AP) — Derek Carr said Los Angeles Chargers defensive end Joey Bosa might have been trying to get under his skin with comments he made about the Raiders quarterback after their Monday night meeting, but Carr noted he saw the game very differently.

Bosa’s comments after Los Angeles handed the Raiders their first loss of the season included saying Carr “gets shook” once he gets hit a few times and shuts down once he’s been pressured.

“He’s probably mad because I was talking a lot of crap to him during the game. It was an emotional day for them. Saw a lot of things about their whole team. Good thing it’s a new week,” Carr said Wednesday. “He’s entitled to that opinion saying those things. It’s almost like he watched the game in reverse. The game that I watched, we came out and fought a little bit after they got after us up front. So, fine.”

The Chargers sacked Carr four times and hit him seven times during their 28-14 victory over the Raiders on Monday night.

“I just thought it was unfortunate that he’d even think to say it," Carr said. "Maybe he’s just trying to get under my skin ... so good job for that. But that’s not a bad thing either.”

Carr said the only opinion he cares about is what Raiders coach Jon Gruden and offensive coordinator Greg Olsen told him. He also reaffirmed Gruden’s sentiments that the team isn't ready to panic over an offensive line that has underachieved through four games.

Carr has been sacked 12 times, third-highest in the league, and pressured 47 times, second-highest behind Indianapolis’ Carson Wentz and Buffalo’s Josh Allen, who have each been pressured 48 times.

“We’re considering all options, but we like our linemen, we really do,” Gruden said. “We did have some pretty good outings."

Despite the struggles by the line, Carr remains one of the top passers in the league. He leads the NFL with 1,399 yards passing and is fifth with 109 completions.

Nevertheless, aside from tackle Kolton Miller, the overhauled line has underperformed while dealing with an array of injuries and inexperience in particular spots.

“There’s definitely things we have to do better from a communication standpoint that would solve a lot of problems,” Carr said. “There’s been spurts where we’ve done it really well, and there’s been spurts where we haven’t all been on the same page. And (offensive line) coach (Tom) Cable always talks about, ‘When we’re all on the same page, usually there’s good results.’"

Cable’s job doesn’t get any easier with former Raiders linebacker Khalil Mack and the Chicago Bears (2-2) visiting Las Vegas (3-1) on Sunday. Mack’s four sacks are tied for 10th in the NFL, while the team’s 15 sacks are No. 1.