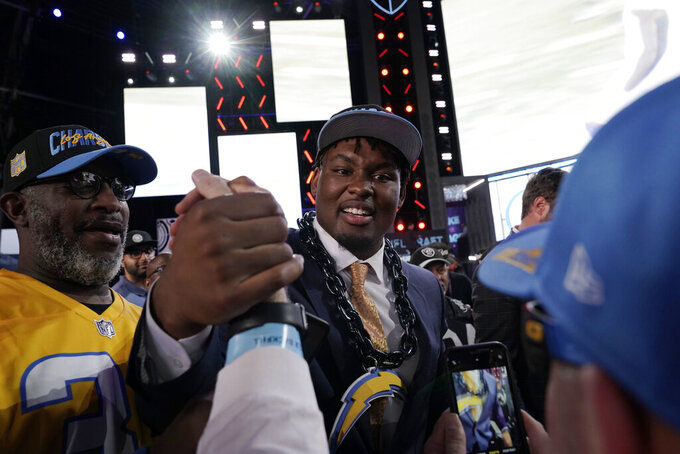 COSTA MESA, Calif. (AP) — Brandon Staley's first year as head coach was about molding the Los Angeles Chargers into a tougher team on both sides of the line of scrimmage.

That continued during this week's NFL draft, where three of the team's nine selections were offensive or defensive linemen.

The Chargers took an offensive guard in the first round for the first time, selecting Boston College's Zion Johnson with the 17th overall pick. Johnson will likely be the Week 1 starter at right guard after Michael Schofield and Oday Aboushi weren't re-signed. Johnson also started one year at right tackle for the Eagles, but Staley and general manager Tom Telesco see him more as an interior lineman.

Los Angeles also added Georgia offensive lineman Jamaree Salyer in the sixth round. Salyer played all five positions on the offensive line during his time at Georgia, but his best fit might also be at guard even though the Chargers still have a need at right tackle.

The Chargers added a defensive lineman in the fifth round with UCLA's Otito Ogbonnia. They added defensive tackles Austin Johnson and Sebastian Joseph-Day in free agency, but Jerry Tillery has been inconsistent during his three NFL seasons.

Johnson earned his master's degree in cybersecurity governance at Boston College. He said he decided to enroll in the program because it made the most sense after he got his bachelor's in computer science.

“It kind of meshed well with computer science to where I could kind of go into more of the hacking routes and take some classes that others weren’t able to because of my background,” he said. "When I first started taking the class, it’s so interesting because the terms are so new. What you consider like espionage or cyber terrorism, those are very loaded terms where a lot goes into that. Where one person might think it’s espionage, which may be allowed in certain circumstances, another person may see it as terrorism.

"As much of a technical subject as it is, it’s also very intertwined in law because international law plays a big part in what we consider cyber terrorism, cyber espionage, hacking, and what’s allowed and what is not.”

The Chargers came into the draft looking pretty set at safety with Derwin James and Nasir Adderley, but they went that route in the third round with the selection of Baylor's JT Woods.

Woods had nine interceptions the past two seasons, including six last year, which tied for the most in the Football Bowl Subdivision. Besides his knack for picks, Woods ran the 40-yard dash time in 4.36 seconds at the NFL scouting combine, tied for second-quickest among safeties.

“The fact is that we have some of these guys that can really cover, and that’s what JT can do. He’s long and he is fast — like, legitimately football fast,” general manager Tom Telesco said. "He has really good ball skills, turns the ball over, plays aggressive, really good feel for the game. He’s a really interesting player.”

Los Angeles added a running back for the third straight year, selecting Texas A&M's Isaiah Spiller in the fourth round and Purdue's Zander Horvath in the seventh.

They also addressed cornerback with two late-round picks Saturday with Wake Forest's Ja'Sir Taylor in the sixth round and Deane Leonard of Mississippi in the seventh.

The Chargers originally had nine picks going into the draft, but dealt a pair of seventh-round compensatory picks (254 and 255 overall) to Chicago. Los Angeles got back their sixth-round pick next year that was initially traded to the Bears as part of the trade for Khalil Mack.

Los Angeles still needs to add depth at inside linebacker as well as figure out who will be the starter at right offensive tackle. Telesco also hasn't announced whether he will pick up the fifth-year option on defensive tackle and 2019 first-round pick Tillery.

“The draft is funny because we’re drafting players more so than just positions," Telesco said. “Obviously, your first-round pick, that guy is probably going to fill a need right away. Second round, it’d be nice to have a bigger role, but everybody after that, these are just guys that we hope they can come in, earn a role, play some special teams and then develop into players down the road.

"These guys aren’t coming into starting roles or really big roles unless they really can earn it in training camp.”