Chargers' Jackson could return from ankle surgery for opener 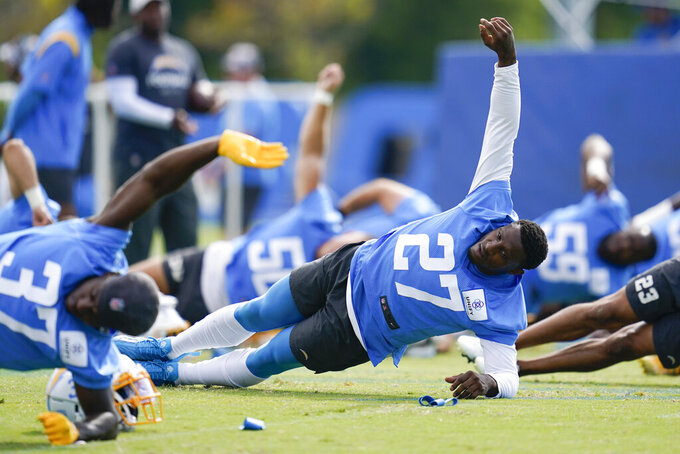 Staley said Jackson’s availability will depend on how quickly the incision wound from a procedure on his right ankle in New York heals, meaning there is at least a possibility he could make his debut for the Chargers against the Las Vegas Raiders on Sept. 11.

The Chargers initially said Jackson was looking at a two-to-four-week recovery, a timeline that meant their their top free agent acquisition could miss the first two games. After hosting the Raiders, Los Angeles will play at Kansas City the following Thursday.

Jackson began feeling discomfort in his ankle about three weeks ago, Staley said. Jackson tried rehabilitation and had an injection in an effort to alleviate the irritation before having surgery.

“It’s not a structural problem,” Staley said. “There’s no injury, so to speak. That’s why he didn’t miss practice. It’s just more about comfort moving forward and him feeling his best overall. He’ll be back here shortly.”

Jackson posted a picture on Instagram of himself in a hyperbaric chamber with his right foot bandaged on Wednesday. He followed up with a message reading, “Minor set back for a major comeback ... GOD SPEED.”

Jackson signed a a five-year contract worth $82.5 million in March following four seasons with the New England Patriots. He emerged as one of the most productive defensive backs in the NFL with 17 interceptions and 37 passes defensed in the past two years.

If Jackson can't play, Staley said Michael Davis, Asante Samuel Jr. and Bryce Callahan would start at cornerback in any personnel packages that use five defensive backs. Davis and Samuel would likely defend outside receivers with Callahan working in the slot.

Davis had one interception in 14 games for the Chargers this past season, while Samuel made two picks in 12 games as a rookie. Callahan was limited to 11 games for the Denver Broncos because of a knee injury, making six starts in the final season of a three-year contract before signing with Los Angeles as a free agent in March.

NOTES: RT Trey Pipkins III worked with the starting offensive line for the third straight day in practice, but Staley said there was no update on the competition between Pipkins and Storm Norton. “We’re not there yet,” Staley said. ... WR Joshua Palmer returned to practice Wednesday after clearing concussion protocol. ... Veteran QB Chase Daniel will start the third preseason game at New Orleans on Friday. Easton Stick will play the second half, the same rotation used in the first game against the Rams after he started against the Dallas Cowboys on Saturday.