Chiefs could be without Clark, Ward for game vs Chargers 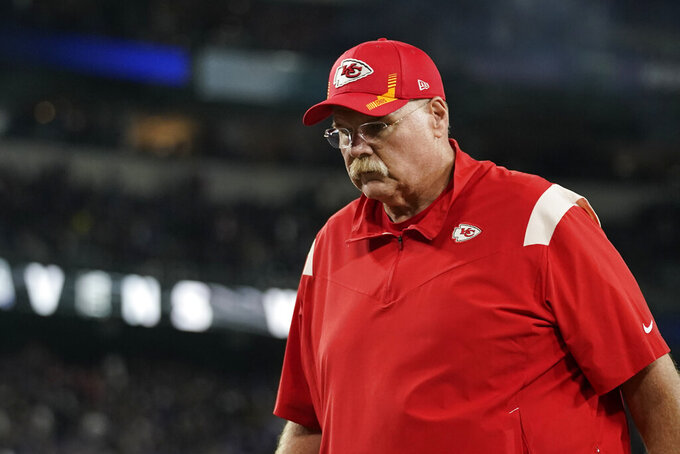 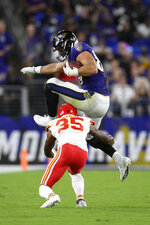 KANSAS CITY, Mo. (AP) — Chiefs defensive end Frank Clark strained his hamstring and cornerback Charvarius Ward strained his quad in practice this week, leaving the status of both in doubt for their game against the Los Angeles Chargers this weekend.

Clark missed most of training camp, all three preseason games and the Chiefs' opener against the Browns with a strained hamstring. But coach Andy Reid said Friday that this injury is to the other hamstring, and that the original injury was fully healed when Clark took the field for last Sunday night's loss to Baltimore.

“It's a different one,” Reid acknowledged. “He was healed. We don't put guys out there if you can't go.”

The Chiefs have struggled to rush the passer through the first two weeks of the season, knocking down the Browns' Baker Mayfield and the Ravens' Lamar Jackson a combined three times. They also have just four quarterback hurries, a league-low 10 quarterback pressures, and their only sack last week came from safety Daniel Sorensen.

The Chiefs have experimented with moving defensive tackle Chris Jones to defensive end to generate more pass rush, but he was shut down by the Ravens last weekend. And without Clark on the field Sunday, the Chiefs could have even more trouble putting any heat on Chargers quarterback Justin Herbert.

“We've got a lot of trust in everyone in our group,” Chiefs defensive line coach Brendan Daly said earlier this week. "We all know this is still a work in progress, and as it is for everybody. We’re grinding each and every day to try and improve and get better and that’s kind of where we’re at with it.”

If the Chiefs are unable to pressure the quarterback, that puts more pressure on the back end, and that would make the loss of Ward even more troublesome — especially with the Chargers' Keenan Allen and Mike Williams coming to town.

Along with stopping the Chargers' passing game, the Chiefs will be looking for some improvement against the run. They're allowing more than 200 yards per game, easily the worst in the league, and they couldn't stop the Ravens on fourth down in the closing minutes last weekend when it would have given them one last chance with the ball.

Losing stalwarts such as Clark and Ward won't make that easier, either.

“I think our main focus right now is stopping the run, making it second-and-long, third-and-long, so we can let our rushers rush,” said Chiefs linebacker Anthony Hitchens, who had a minor surgery on Monday but will play against Los Angeles.

“We don’t have many sacks. The reason why is because it’s third-and-2 and first- or third-and-3, and they can run or pass,” Hitchens said. “We just have to correct that aspect so we can let Chris and (those guys) just take off.”