Chiefs head into playoffs with plenty of rest behind them 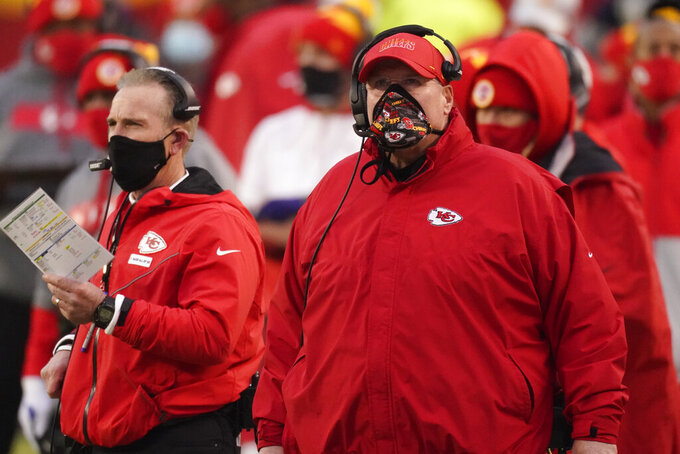 KANSAS CITY, Mo. (AP) — It took the Kansas City Chiefs sitting half their starters, some with injuries but most as a precaution, for the defending Super Bowl champs to lose by more than one possession for the first time in an NFL-record 60 games.

If the streak was going to end, the Chiefs are fine with it happening that way.

The closest Patrick Mahomes came to getting hurt Sunday was stubbing his toe on the sideline during a 38-21 loss to the Los Angeles Chargers. The same for tight end Travis Kelce, wide receivers Tyreek Hill and Sammy Watkins, safety Tyrann Mathieu and a host of other players that will be crucial as the Chiefs begin the playoffs in two weeks.

With the No. 1 seed in the AFC and a first-round bye already secured, coach Andy Reid made the obvious and anticipated decision to treat the Chiefs' regular-season finale like a preseason game. So it was Chad Henne under center, Byron Pringle catching touchdown passes and Juan Thornhill making tackles in the secondary against their division rival.

“We got a look at some young guys. Some old guys knocked some rust off," Reid said, “and all of them had a great attitude.”

The Chiefs (14-2) missed out on matching the 2011 Packers for the best regular-season record by a defending champion, but that hardly matters in the end. Nor does it matter much to them that their 10-game win streak ended one victory shy of the franchise record — so long as they start a three-game win streak in the divisional round of the playoffs.

“We got a lot of guys in the locker room that kind of take it serious, that are really committed to the process,” Mathieu said Monday, “so I think the end results, we're not focused on that. Just focused on showing up every day, putting our best foot forward, and that carries through the week.”

The Chiefs won't know their opponent until after the wild-card round. Reid indicated his coaching staff has already laid the groundwork for everybody they could face, even before their game against the Chargers. They intend to drill into them more this week, practicing a couple times to keep sharp but otherwise taking it easy.

The week off — or two, as it turned out — will certainly help. Hill is dealing with a sore hamstring and Watkins has a sore calf, though both should be back for the postseason. Running back Clyde Edwards-Helaire is still recovering from a high ankle sprain, linebacker Ben Niemann has missed time with a hamstring injury, right tackle Mike Remmers has a back injury, and linebacker Anthony Hitchens has been on the COVID-19 list.

As important as getting them healthy? Keeping everyone else healthy.

“Take care of themselves, take advantage of the time, rest and we’ll get back to it here," Reid said. “Their minds won't go far from it. That's how this group is wired. And then stay safe — that's the other part with the COVID part of it.”

If nothing else, Henne showed that he could handle a few series for Mahomes if something happened during the playoffs without the Chiefs' championship chances getting dashed. He was 23 of 32 for 218 yards with two touchdowns and no picks while doing a solid job of running their run-pass option game.

The second- and third-team defense? The backup offensive line? In truth, there wasn't much to be worried about Sunday given so many regulars got the weekend off.

Darwin Thompson was the odd man out at his position when the Chiefs drafted Edwards-Helaire and signed Le'Veon Bell as a free agent. But the young running back ran 14 times for 45 yards and a score while adding seven catches for 65 yards and another touchdown against the Chargers.

Wide receiver Mecole Hardman was one of the regulars to play Sunday and he made another poor decision in the punt return area, trying to field a bouncing ball early in the game. It bounced away from him, the Chargers recovered the muff and they wasted little time plunging into the end zone for a touchdown.

Willie Gay hurt his ankle on the Chiefs' third defensive play against Los Angels, leaving them with two healthy linebackers the rest of the way. Backup cornerback DeAndre Baker was carted off after breaking his leg in the second half.

14 - The Chiefs win total is still a franchise record despite all but giving away the game Sunday.

The Chiefs will play the lowest remaining seed from the wild-card round, which means the Titans, Ravens, Browns or Colts.