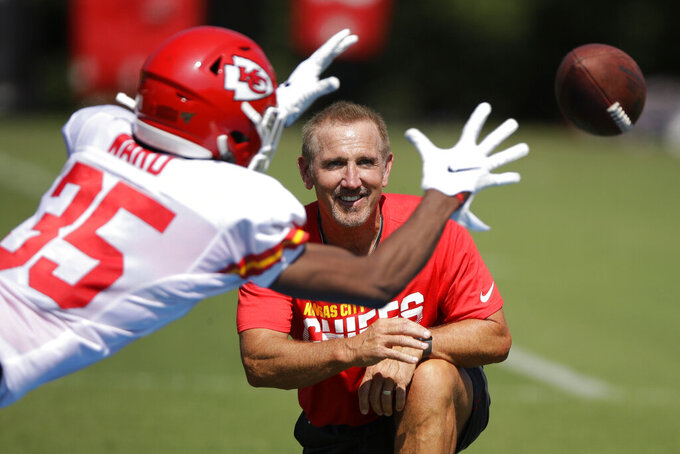 ST. JOSEPH, Mo. (AP) — Andy Reid has been coming to training camp with the Kansas City Chiefs long enough to know his way around Missouri Western State University, whether it's finding the best route to the two outdoor practice fields or the quickest way to the dining hall.

Sometimes the Chiefs' coach forgets that this experience is new for a whole bunch of people.

Most of them reside on his rebuilt defense.

After the Chiefs put together one of the worst seasons in franchise history on that side of the ball, yet still reached the AFC championship game thanks to their record-setting offense, Reid made the painful decision to part ways with longtime friend and coordinator Bob Sutton.

In his place came Steve Spagnuolo, and that was just the start of the changes.

Spagnuolo immediately decided to convert the Chiefs from a 3-4 scheme to a 4-3 defense, then watched as general manager Brett Veach began finding players to fill it out. They traded for defensive end Frank Clark and signed him to a $104 million, five-year extension, and added free agent safety Tyrann Mathieu on a $42 million, three-year deal to become the quarterback of their secondary.

It was an unprecedented overhaul for a team that came within a hair of playing in the Super Bowl.

"In my mind we're all coming up for our seventh camp and then I have to keep reminding myself that these guys don't even know how to get up to the practice field," Reid said. "There's some nice leadership qualities from some of those players that were added, and intensity. I've been looking forward to a competitive camp up here. It should be pretty exciting."

That competition already has been on display.

Clark spent the first padded practice Monday getting into the face of left tackle Mitchell Schwartz during one-on-one drills. Then, he stood before a bank of television cameras and proudly proclaimed that the "defense won the day," no doubt igniting a fire under that high-powered offense.

"Spags is a legendary coach," Clark said. "You know, he came in and he threw everything at us in the spring. He put the whole script out there and put it into our hands as players, and to really invest our time learning this playbook. You look down at his tree of him coaching with Coach Reid, and him coaching in Philly, and him coaching the Giants' defense — he's just a great coach."

Clark should know something about great defenses, too. The Chiefs acquired him from Seattle, where he was part of coach Pete Carroll's highly regarded "Legion of Boom."

Yet the differences between the Chiefs' defense last season and this season extend far beyond the coaching staff, the scheme and the personnel, though they could have as many as seven new starters.

There is also a different personality.

The Chiefs played the quintessential bend-but-don't-break style last season, giving up huge yardage before buckling down. That softness came back to haunt them in the AFC title game, when Tom Brady led the Patriots downfield on the first possession of overtime for the winning score.

The bunch that has taken the practice fields at Missouri Western this week already have shown more energy, more speed and more attack. There were several big hits during practice Tuesday, including on a play in which star wide receiver Tyreek Hill had to leave with a bruised quad muscle.

"I love training camp. I always have, right from the beginning when I was with Andy and we used to go to Lehigh University (with) Philadelphia," Spagnuolo said after Tuesday's practice. "We're getting closer to football. It's not all the way there because we can't tackle."

That won't happen until the Chiefs play their preseason opener Aug. 10 against the Bengals.

Then they'll begin to know whether their defensive overhaul has paid off.

"All I do is focus on them getting better each day," Spagnuolo said. "Now, that's a cliche, right? But it's real. I mean, if we don't do that or buy into it and embrace it, all we'll do is go back."

NOTES: Hill walked off the field before riding in a cart to the locker rooms. The Chiefs do not believe his injury is serious. ... RT Mitchell Schwartz (back) did not practice Tuesday. Cam Erving took his place with the starters. ... Breeland (lacerated thumb) was back at practice. ... The Chiefs practice again Wednesday before their first day off of training camp.