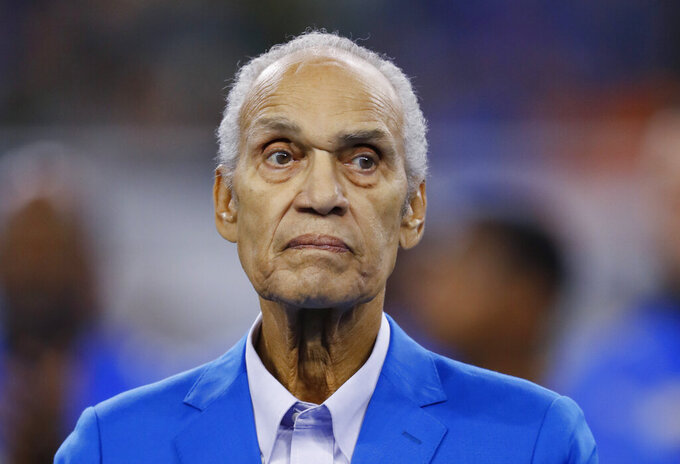 FILE - In this Oct. 28, 2018, file photo, Former Detroit Lions player Roger Brown watches during the team's NFL football game against the Seattle Seahawks in Detroit. Brown, a College Football Hall of Famer and six-time Pro Bowl selection with the Lions and the Los Angeles Rams, has died. He was 84. The Lions and College Football Hall of Fame announced his death Friday, Sept. 17, 2021. The Lions said a member of Brown's family confirmed the death. No cause was given. (AP Photo/Paul Sancya, File)

LOS ANGELES (AP) — Roger Brown, a College Football Hall of Famer and six-time Pro Bowl selection with the Detroit Lions and Los Angeles Rams, has died. He was 84.

The Lions and College Football Hall of Fame announced his death on Friday. The Lions said a member of Brown's family confirmed the death. No cause was given.

“In my 10 years with the Lions and the Rams, I never missed a game,” Brown said in a 2015 interview with The Virginian Pilot. “I had broken hands and broken bones. But probably not as many as I caused. I had 12 operations.”

Brown's most memorable game with Detroit was on Thanksgiving Day in 1962 against Green Bay when he sacked Hall of Fame quarterback Bart Starr seven times. The Lions had 11 sacks in that game, which remains a franchise record.

Sacks weren't made into an official statistic by the NFL until 1982, but Brown had four seasons with 10 or more with Detroit, according to Pro Football Reference, including 14 1/2 in 1964.

“Roger Brown will always hold a special place in our team’s history,” Lions owner Sheila Ford Hamp said in a statement. “Roger’s career accomplishments solidify his legacy alongside some of the all-time greats of our game. I am happy we were able to induct Roger into the Pride of the Lions in 2018 to ensure that his contributions to the Lions will never be forgotten.”

Brown was traded to the Los Angeles Rams in 1967 and joined the “Fearsome Foursome” defensive line alongside Deacon Jones, Lamar Lundy and Merlin Olsen for three seasons. He made the Pro Bowl in 1967 after getting seven sacks.

Brown was inducted into the College Football Hall of Fame in 2009 after a dominating career at Maryland Eastern Shore from 1956-59. He was a two-time NAIA All-American and was part of a team that went 24-5-1 during his four years at the school.

“Roger Brown was an absolute force on the defensive line at Maryland Eastern Shore,” said NFF Chairman Archie Manning. “He was a huge part of HBCU football history and helped usher in the era of massive linemen to the game."

Brown was a successful businessman and restaurateur in the Hampton Roads area of Virginia following his retirement.