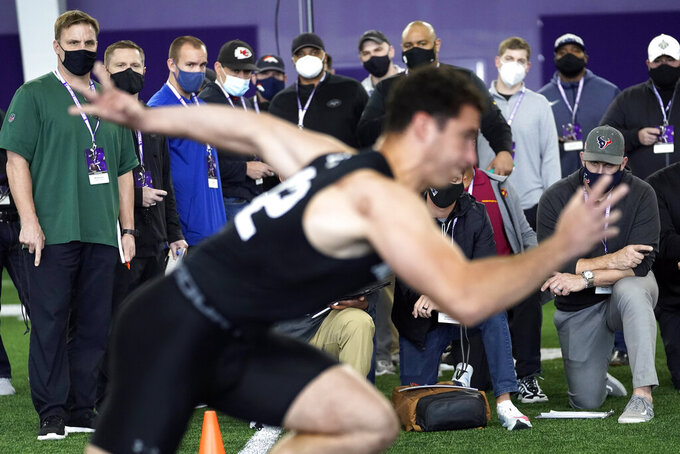 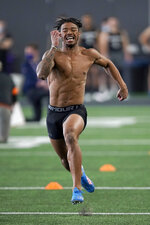 Coaches and general managers have flocked to one city for nearly 40 years to interview players and watch them run drills at the NFL's annual scouting combine.

Now teams are sending scouts, coaches and general managers across the country for 103 college pro days replacing this year's combine in yet another NFL adaptation to the coronavirus pandemic.

The NFL has devised rules for this scouting version of speed dating that started March 5 at Kansas and concludes April 9. COVID-19 means no more than three people per team allowed at any pro day, so film review will be crucial for this April’s draft.

“This will end up being the Super Bowl of good scouting and player personnel,” agent Leigh Steinberg said. “It’s going to be their time to shine. It’s going to be their Super Bowl, with the better organizations being more creative and coming through with better talent assessment, and some people not being very successful. But that happens every year, right?”

Teams also won't be allowed private film sessions, workouts, or dinners with prospects, though in-person visits are allowed — if a school built time into the schedule. Any private workout or timing and testing not affiliated with the NFL is off limits.

Pro days started in earnest Tuesday with breaks only for weekends, with five to nine being held a day. That will keep GMs, coaches, scouts and other team personnel very busy even with video from each pro day being shared with each team.

“We’re fortunate to have some guys that have been in this thing for 15-20 plus years, so I feel really good about if I can’t make it to some of these, that the eyes we’re going to have on these guys are going to be able to get us the information we need to make good decisions,” Gutekunst explained.

Chicago GM Ryan Pace went over schedules with the Bears’ coaches before they hit the road along with the scouts.

"We’ve just got to be resourceful in this process along with every other team,” Pace said.

No combine means NFL teams won't have one baseline for the height, weight and speed for every player. A consistent 40-yard dash time might be the biggest challenge. In Indianapolis, the timing gear and distance for the 40-yard dash is standard for everyone on a drill run indoors without wind.

Kansas City general manager Brett Veach said that means checking the files to see which school has a fast track or a 40-yard dash that doesn't go the distance.

Greg Newsome II had teammates watching Tuesday when the cornerback ran an unofficial 4.31-second 40-yard dash at Northwestern's indoor practice facility. Newsome also noticed all the NFL coaches on the field watching. At the combine, those coaches and GMs watch the 40 from the seats at Lucas Oil Stadium.

“Even though I didn’t run in Indy, I thought it was that Indy feel,” Newsome said.

COVID-19 also remains a factor, of course. NFL personnel will be required to wear masks and keep their distance. They also must have negative tests, so scouts and personnel may be equipped with portable testing kits for longer road trips. Local COVID-19-related guidelines must be followed.

“Every state is kind of different, so it’s hard to have a uniform set of rules in place,” Titans general manager Jon Robinson said.

When teams host up to 30 players, team doctors run their own tests to check a healing ACL or if a shoulder might need further surgery. Veach said that’s extremely challenging but the NFL is working on a plan to get medical checks on the 323 players who would've been invited to this year’s combine.

“It won’t be probably as detailed or as exact as we had in the past,” Veach said. “That is always an issue. That was an issue last year when we couldn’t bring guys in-house for top-30 visits or go out and work those players out.”

Teams are allowed to interview a player by video, which started Jan. 25, up to five times, with each limited to a maximum of 60 minutes. Old school phone calls are allowed with no limits all the way up to April 28 — the day before the NFL draft starts.

Instead of interviewing a player in person, teams are being creative to squeeze as much out of each session. Robinson is having other members of the Titans' organization sit in on video visits, though Wi-Fi isn't the best way to develop a relationship.

“They can read body language, they can look at and listen to these prospects, so that we get different opinions on how they’re performing on the questions that we’re asking,” Robinson said of the extra eyes.

Jets general manager Joe Douglas noted that the league managed last year with a combine and no pro days.

“This year we don’t have a combine, but we have pro days," Douglas said. "So we’re going to make the most of it. And I know our guys are excited to get out and start attacking these pro days.”