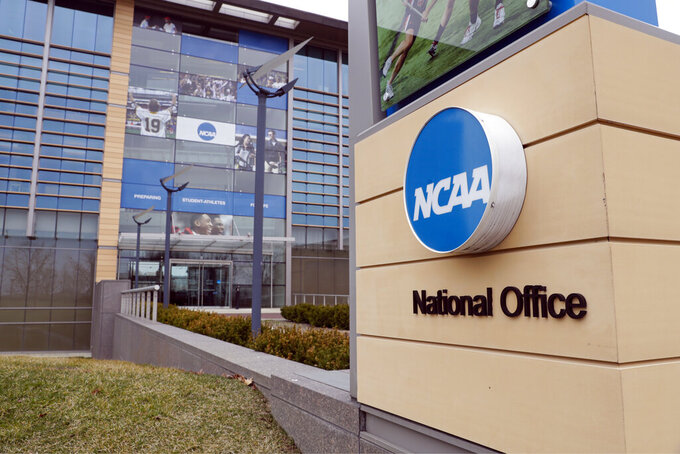 FILE - In this March 12, 2020, file photo, the national office of the NCAA in Indianapolis is shown. The NCAA Board of Directors is expected to greenlight one of the biggest changes in the history of college athletics when it clears the way for athletes to start earning money based on their fame and celebrity without fear of endangering their eligibility or putting their school in jeopardy of violating amateurism rules that have stood for decades. (AP Photo/Michael Conroy, File)

CHARLOTTE, N.C. (AP) — Chris Clunie chuckles thinking about what Stephen Curry's marketing potential might've been at Davidson during the Wildcats' remarkable 2008 NCAA Tournament run had Curry played in an era when college students could profit from their own fame and celebrity.

“It would have been absolutely bananas around here,” laughed Clunie, a former Wildcats basketball player who now serves as the college's director of athletics.

The groundbreaking ruling that went into effect Thursday enabling college athletes to profit from use of their name, image or likeness for the first time has sent athletic directors and compliance officers scrambling. Now that the NCAA cleared the way for money to flow — with some restrictions — it is up to schools to help ensure all those endorsement deals and social media shoutout arrangements follow state laws and still-fresh, brand new school policies.

In short, their job responsibilities have increased and become infinitely more complicated.

Clunie said the work is focused on educating athletes about making sure their newly granted marketing decisions are compliant.

“We want to support them,” Clunie said. “We want to make sure kids don’t make bad decisions and get trapped into opportunities that don’t make sense.”

Charlotte is one of many schools that has tried to get ahead of the curve, starting a “Greenlight” initiative to help athletes pursue NIL opportunities. The school has partnered with COMPASS and INFLCR to provide education, monitoring, disclosure, and brand-building help. Many schools have struck deals with companies like that to help connect athlete to deal.

49ers athletic director Mike Hill said ”we have system in place where the student-athletes will provide information to us not to review and approve, so much as it is to ensure that it's clearly not a pay-for-play or a recruiting inducement of any kind and meets the minimum standards the NCAA has put forth regarding eligibility.”

Crossing that fine line is what concerns longtime Connecticut women's basketball coach Geno Auriemma. The Hall of Fame coach said he's made one simple request to his players: run any potential endorsement opportunities by him or the compliance department before signing.

“The last thing we want is to go, ’Hey coach, I got this great deal. Yeah, great, now you’re ineligible,'" Auriemma said.

Despite his excitement over the NIL rules, Hill anticipates there will be some issues to deal with in the coming months and years.

One of those involves agents.

While athletes can hire agents to represent them to handle their NIL deals, those same agents are not allowed to advise them on professional athletic opportunities. Hill said delineating between the two could prove difficult.

“I think it's almost impossible to police that," Hill said.

On Thursday, the NFL Players Association sent out notifications to agents, saying, in part, “Any NIL contracts entered into with college players by a contract advisor should be wholly separate from any future contract advisor services involving the negotiation of player contracts with NFL teams."

With the doors flung wide open for athletes to receive compensation for self-promotion, it is a new world for those who work mostly behind the scenes in college compliance offices.

Some of what is happening is contrary to the policies and procedures they've grown accustomed to for years.

“I think there will probably be a lot of nervous twitches from compliance staff as they see these (sponsorship) deals,” joked Cameron Walker, the deputy athletic director at Tennessee.

Chad Jackson, a senior associate AD for compliance at Baylor, summed it by saying, “prior to (Thursday), we simply said ‘no,’ We might not have liked saying ‘no,’ but that was the answer. It was pretty easy to just say ‘no.’

“Today, we’re saying, ‘Yes, but ...,’ Jackson added. ”And that ‘but’ part is verified through the law and institutional policy.”

All those laws and school policies are not the same, creating potential headaches for, say, athletes who are transferring. And while some guidance is common — the majority of schools require their athletes to notify them in advance before signing a NIL deal — there are myriad differences.

For instance, Clemson doesn't allow use of the Tigers logo in NIL efforts “at this time.” However, Tennessee athletes can use the Volunteers logo and name if they get approval from the school first.

“We have encouraged our student-athletes and given them a contact person where, if you want to use the logo, this is person you contact and this is the process you go through to seek approval for that," Walker said. “So it not only depends on using the logo, but how you use the logo.”

And what about shoe deals?

An athlete at Baylor couldn't sign an endorsement deal with a competitor of school sponsor Nike under a new Texas law. Tennessee athletes can, providing they don't wear the competitor's brand — say, Under Armour or Adidas — while participating in school activities.

There are many questions to be resolved, including whether schools with deep marketing resources will become more attractive to recruits, putting more distance between the haves and have-nots. But for now, athletes and their compliance officers are still sorting through the basics.

“The bottom line here is student-athletes have to take it upon themselves to step into this phase and educate themselves and think through this and do the right thing, while understanding the implications and all of the things that come with this new opportunity,” Clunie said. “For (schools), the work is less about helping them get opportunities but more about making sure if they're going about the opportunities in the right way.”