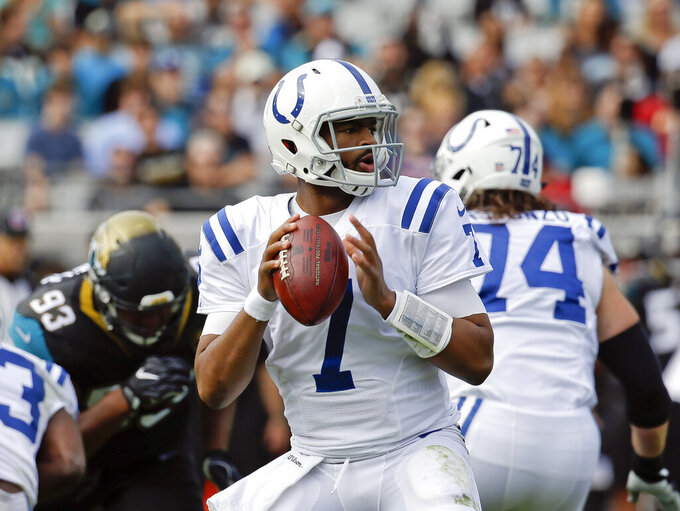 FILE - In this Dec. 3, 2017, file photo, Indianapolis Colts quarterback Jacoby Brissett (7) looks for a receiver as he is rushed by Jacksonville Jaguars defensive lineman Calais Campbell (93) during the first half of an NFL football game in Jacksonville, Fla. Brissett will make his first start since 2017 on Sunday, Sept. 8, 2019, when the Colts face the Los Angeles Chargers in the season opener. (AP Photo/John Raoux, File)

You see, Lynn has his own set of key players he is missing going into Sunday's opener at Dignity Health Sports Park. The AFC matchup between two of last year's postseason participants has revolved more over who isn't on the field.

The last time Indianapolis opened a season without Luck in the starting lineup was two years ago, also in Los Angeles.

Scott Tolzien, Luck's replacement, was 9 of 18 with 128 yards, no touchdowns and threw two interceptions — both of which were returned for touchdowns — in a 46-9 loss to the Rams. Tolzien also was sacked four times before being benched in favor of Jacoby Brissett, who had been with the team for eight days.

Tolzien never threw another pass in the NFL as Brissett finished the season 4-11. Now, Brissett is set to make his first start since the 2017 season and with a new $30 million deal.

"He is our guy," Reich reiterated Wednesday after being asked about the contract. "We believe in Jacoby. We trust Jacoby — everything we've seen from Day One about the way he handles his business, about the way he performs. He is our guy and we wanted to make that statement going forward."

"I think we have a lot of confidence in the guys that are filling in for them," Rivers said. "It's not catching them off guard."

Here's what else to watch as the Chargers and Colts open the season against each other for the first time since 1970:

Rivers was the only AFC starting quarterback who did not take a snap during the preseason as Lynn rested most of his veterans.

The 16-year veteran, who will make his 209th straight start and pass Peyton Manning for third-longest streak among QBs, said the work he got in during joint workouts with the Saints and Rams was equivalent to what he would get in preseason games.

"Once you get out there in a series, get a first down or two and the game gets going, I don't think anybody is thinking, 'Gosh, if I had three more snaps in preseason, I would really be ready to handle this,' you know?" Rivers said. "We may start off three-and-out, but it won't be because I didn't play in the preseason."

NEED TO STEP UP

While the Chargers and Gordon remain at an impasse over a contract extension, Ekeler and Jackson will split carries at running back, like they did the four games late last season when Gordon was sidelined with a knee injury. Gordon has three straight seasons over 1,200 scrimmage yards, which might put pressure on the passing game if the run game stumbles.

A bigger concern is the offensive line as Scott and right tackle Sam Tevi struggled during the preseason.

Okung will miss at least the first six games, while James — an All-Pro selection as a rookie last season — is likely out until mid-November. Adrian Phillips gets the call at strong safety.

He made two kicks to help New England win the "Snow Bowl" and advance in the 2000 playoffs. He made two winning kicks in the Super Bowl. He even made a kick two years ago in a Buffalo blizzard.

But as he prepares to play in yet another stadium, Dignity Health Sports Park, Vinatieri has some concerns.

"It'll be interesting," Vinatieri said. "Every time there's a new stadium, you have to go out there and see the conditions. I know the field was a little rough out there during preseason, but hopefully they've got that taken care of. But it's just like anything else, you go in there and you figure it out early. The earlier you can get out there and figure all the external stuff, the winds and this and that, you're in good shape."

The Colts have two starters on defense this season — defensive end Justin Houston, who spent his first eight seasons with Kansas City and strong side linebacker Matthew Adams, who will make his first NFL start.

For Houston, the 2014 NFL sacks champ, and the Chargers are familiar foes.

But Adams is a relative unknown. After the 6-foot, 229-pound second-year player appeared in only two games and recorded just one tackle last season, he beat out Zaire Franklin, another second-year player, and rookie E.J. Speed, a fifth-round pick, for the job.

Rookie receiver Parris Campbell also is expected to play after missing the first three games of the preseason with a hamstring injury.

FASTER OUT OF THE GATE?

Los Angeles is 2-6 in September games under Lynn, which includes a 0-4 start in 2017. The Chargers lost two of their first three last season, before winning six straight and 10 of 11.

Indianapolis got off to a 1-5 start in Reich's first season last year before winning nine of its last 10 to make the playoffs.