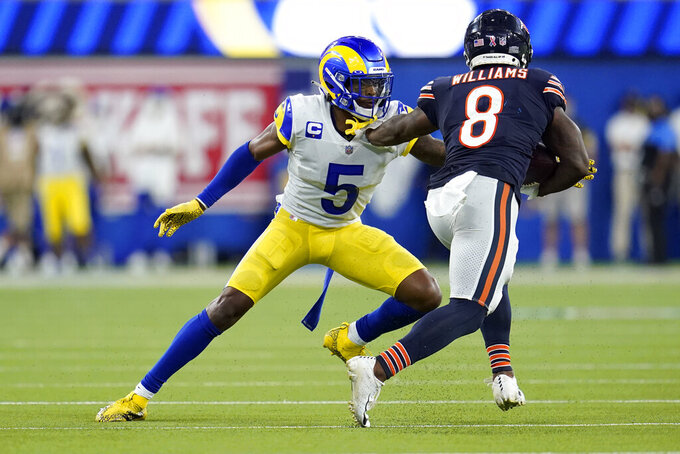 OPENING LINE: Rams by 4, according to FanDuel SportsBook

TURNOVER DIFFERENTIAL: Rams, plus-2; Colts, even.

RAMS PLAYER TO WATCH: S Jalen Ramsey. Last week, Rams coaches took advantage of the two-time All-Pro's aggressiveness by moving him around the field. Expect to see more of the same — with a few wrinkles.

COLTS PLAYER TO WATCH: DT DeForest Buckner. Despite playing all of last season with one hand in a soft cast, Buckner still earned All-Pro honors. If healthy, Buckner believes he could be in the mix for Defensive Player of the Year. and this week's game could help him make the case.

KEY MATCHUP: Rams DT Aaron Donald vs. Colts LG Quenton Nelson. How often these two actually square off Sunday is unclear. But when they do, it will be worth it to see the NFL's two best at their respective positions.

SERIES NOTES: Los Angeles has won two straight in this series. ... Five consecutive games have been decided by 17 or more points, the past three by 30 or more. ... The Rams' only other appearance at Lucas Oil Stadium, in 2013, resulted in a 38-8 loss. ... Robert Irsay, the late father of Jim Irsay, acquired the Colts in July 1972 after buying $19 million in Rams stock primarily from the estate of Dan Reeves, then swapping franchises with Baltimore owner Carroll Rosenbloom. Reeves moved the Rams from Cleveland to Los Angeles in 1946, Robert Irsay moved the Colts from Baltimore to Indy in 1984 and Rosenbloom's widow, Georgia Frontiere, moved the Rams from Los Angeles to St. Louis in 1995.

STATS AND STUFF: Matthew Stafford threw for 321 yards and three TDs in his Rams debut, becoming the first NFL quarterback to win his debut with a new team while throwing for 300-plus yards with three TDs and no interceptions. ... Donald has won the NFL's Defensive Player of the Year Award three times in the past four seasons and needs 1 1/2 sacks to break Leonard Little's franchise record (87 1/2). ... Los Angeles coach Sean McVay started his career 11-1 against AFC teams, but has lost four straight. ... The Rams are 4-0 in road openers under McVay, scoring 30 or more points in all four. .. Colts RB Jonathan Taylor needs 75 yards rushing to become the third-fastest player in franchise history to 1,300 yards (Edgerrin James and Marshall Faulk). ... Carson Wentz threw no interceptions in his Indy debut and can do it in back-to-back weeks for the first time since a four-game streak to end 2019. ... Colts DE Kwity Paye became the sixth NFL player since 1999 to have three tackles, one for loss and one fumble recovery in his pro debut. ... James and Peyton Manning will receive their Hall of Fame rings at halftime Sunday.

FANTASY TIP: Stafford looked terrific last week, throwing underneath efficiently while successfully taking shots down the field against a solid Bears defense. The Colts defense struggled in coverage without three-time Pro Bowl CB Xavier Rhodes last week and if Rhodes doesn't play this week, it could be another long day.