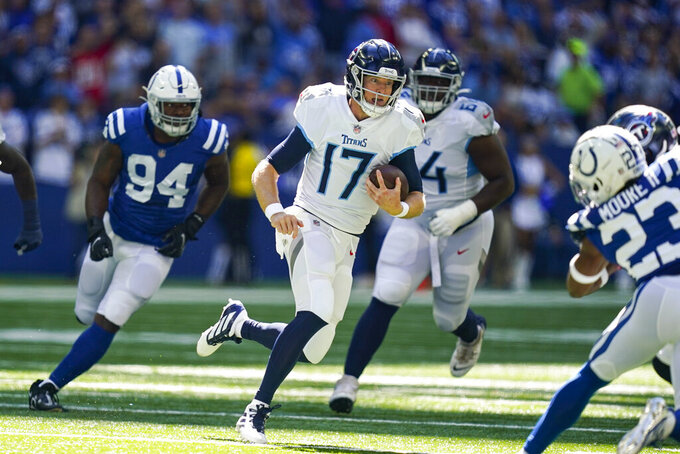 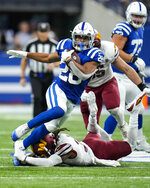 Too many interceptions and too many fumbles have led to too many one-possession losses.

“The good thing about these mistakes is no one team is causing them,” receiver Parris Campbell said Monday. “It’s all internal, it’s a all self-inflicted and they can be fixed. But it’s got to be fixed now. We have that ability to change it and band together as an offense and fix those things.”

For eight weeks, though, the problems have persisted.

Last week, Reich benched 2016 league MVP Matt Ryan one day after he threw two more interceptions in a critical loss at AFC South-leading Tennessee. Despite being inactive against the Commanders, the 37-yeard-old Ryan still leads the NFL with nine interceptions and 12 total giveaways. He's also still tied with Chicago quarterback Justin Fields for the most fumbles (11).

Still, the Colts (3-4-1) were far from flawless following Ryan's demotion.

And the solution, Reich and his players believe, rests solely in their hands.

“We’ve taken a lot of pride in being good in the turnover ratio over the years,” Reich said. “It’s each coach, each player asking what can I add to the equation so we can do a better job? We’ve got to get back to our ways of winning the turnover battle.”

Defense. Despite the lack of takeaways, Gus Bradley's unit has been one of Indy's few constants this season. Yes, it gave up 10 points in the final five minutes to Taylor Heinicke and the Commanders, but allowing just 17 points should be good enough to win games.

Red-zone offense. In addition to the turnover woes, Indy continues to be inefficient inside the opponents' 20-yard line. They've settled for far too many field goals, including another when they failed to score from inside Washington's 1. The same problem exists in short-yardage, third-down situations.

Campbell. The fourth-year receiver has put together the best three-game stretch of his career. While he didn't score this week, like he did the previous two, he showed big-play ability. He had two receptions for 43 yards and one carry for 28, giving him 23.7 yards per touch.

RT Matt Pryor. After starting the season at left tackle and moving to right tackle before settling in at right guard, Pryor's struggles have continued. He's still allowing too much pressure and was called for two more penalties Sunday.

Defensive lineman Tyquan Lewis was carted off the field on Washington's final drive and Reich confirmed Monday that Lewis has ruptured patella tendon in his left knee that will end his season. Lewis suffered the same injury to his right knee last year on Halloween. Now Indy needs to find a replacement for a key rotational player.

Reich did not provide an update on Taylor, who left in the first half with a twisted ankle. Trainers retaped the ankle and Taylor finished the game. But he missed two games earlier this season with a sprained ankle. Reich doesn't anticipate knowing Taylor status for New England until later this week.

1 — Though the Colts have struggled mightily through the first eight weeks and already made a quarterback change, they are one game out of a playoff spot at No. 9 in the AFC.

Ehlinger made quick decisions with his arm and legs and also showed the ability to throw deep. Reich was impressed with much of what he saw from his new quarterback, though there's certainly room for improvement. But Ehlinger's presence seemed to help Indy's ground game get going and forced Washington off the line of scrimmage, opening up passing lanes. The real test comes this weekend when Ehlinger matches wits with Patriots coach Bill Belichick.