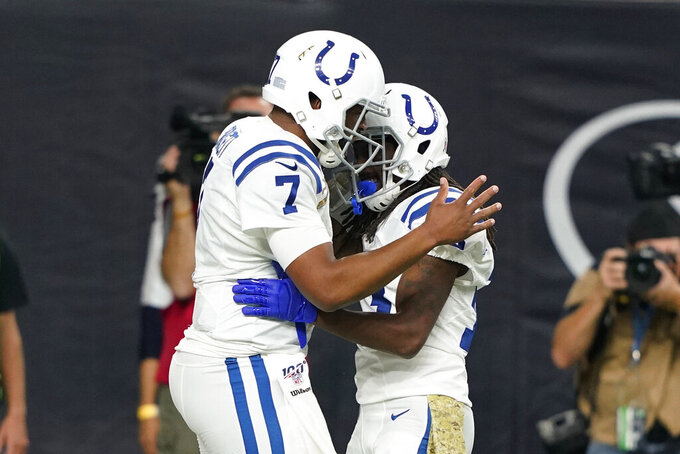 Indianapolis Colts quarterback Jacoby Brissett (7) celebrates with teammate T.Y. Hilton (13) after a touchdown against the Houston Texans during the first half of an NFL football game Thursday, Nov. 21, 2019, in Houston. (AP Photo/David J. Phillip) 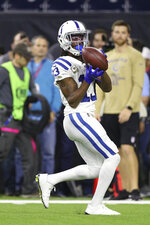 NEW ORLEANS (AP) — Receiver T.Y. Hilton is active for the Indianapolis Colts' game against the Saints on Monday night.

Hilton has missed six games this season, including five of the last six, and had been listed as questionable with a groin injury on the final official injury report of the week on Saturday.

Hilton enters the game with 35 catches for 378 yards and five touchdowns in seven games this season.

Colts cornerback Pierre Desir also is active after being listed as questionable with a groin injury.

The Saints signed defensive tackle Taylor Stallworth and defensive back T.J. Green from their practice squad and they were active on Monday.

The Saints already had listed four active players as out for the game on Saturday, including starting strong safety Vonn Bell and linebacker Kiko Alonso, who both have knee injuries, as well as reserve cornerback Patrick Robinson, who has a calf injury.

Cornerback Kenny Moore, who has an ankle injury, is the lone player previously ruled out by Indianapolis.