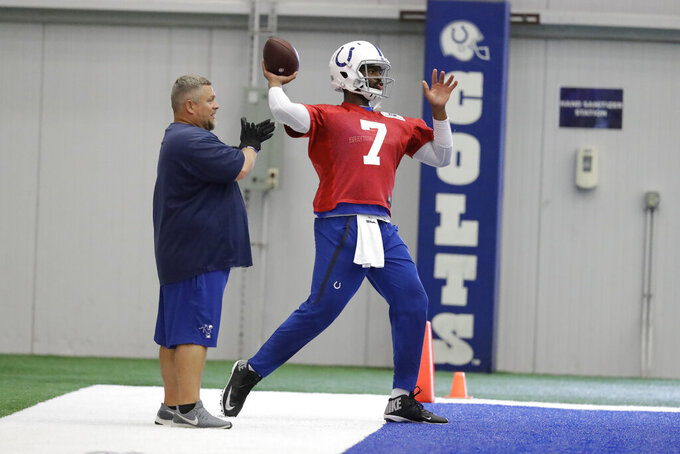 Andrew Luck's stall was empty, the name plate gone, the era over.

Coach Frank Reich and general manager Chris Ballard started the day with a team meeting to discuss how the Colts would proceed without their newly retired starting quarterback.

Luck's replacement, Jacoby Brissett, took the podium inside a packed media room, Pro Bowl receiver T.Y. Hilton wore a Stanford baseball cap to honor his 2012 draft classmate and then it was time to get back to work.

"In one respect this story is unique and shocking," coach Frank Reich said. "But it's happened enough where a team loses a great player, and it galvanizes a team and propels them to a championship."

The former pastor has a vast array of resources to make the point, some from his own experiences.

In 1989, when Jim Kelly got hurt most thought the Buffalo Bills would slow things down for his backup, Reich.

In 2017, Reich was Philadelphia's offensive coordinator when MVP candidate Carson Wentz tore the anterior cruciate ligament in his left knee — an injury many expected to derail the Eagles' title hopes. Instead, Nick Foles stepped in and led Philadelphia to its first title since 1960.

Then there was the seemingly made-for-TV script from two decades ago when a grocery store bagger-turned-quarterback Kurt Warner took over for the injured Trent Green and led the St. Louis Rams to a Super Bowl title. Warner was the league's MVP, too.

But Reich and the Colts know this season is not about the past. They must focus on adding their own, unique chapter to the underdog story to fill the hole in the middle of the locker room.

"I need to be Jacoby Brissett, just be myself," he said when asked about permanently replacing his close friend. "It's always been prepare like you're the starter."

Outside the locker room, many doubt Brissett can emerge as the next Foles, Warner or even Reich. Brissett went 4-11 in 2017, becoming the starter less than two weeks after Indy acquired him in a trade from New England, behind an offensive line that allowed the most sacks in the NFL that season.

Around the Colts' complex, though, there are plenty of Brissett believers.

Reich noted Brissett has taken more than 1,200 snaps with the starting unit since April when offseason workouts started as Luck tried to recover from a lower left leg injury.

Plus, he's working with a coach who has been down this road previously. Reich spent his first decade in the NFL playing behind a Hall of Famer, needing to be ready at every moment. It's a conversation the two have had multiple times since Reich was hired 18½ months ago.

"From Day 1, I came in and watched all of Jacoby's film and I said this guy is a top-20 quarterback, this guy is a starting quarterback in the NFL," Reich said. "This guy is all in, he's not just checking off boxes. He's a great leader and I'm excited for him."

So are teammates, who have embraced Brissett's hard-working approach on the field and his fun-loving style off it.

As for Luck, teammates universally backed his decision to walk away two weeks before the Sept. 8 season opener against the Los Angeles Chargers.

Some, like Brissett and left tackle Anthony Castonzo, acknowledged Luck let them in on the secret before Saturday's game. Most, like All-Pro linebacker Darius Leonard, said they found out as word trickled out on the sideline.

Luck made his formal announcement to the team in the postgame locker room, just moments before going public with the decision.

"Everybody deals with the pain, it's when you're out there and you're doing something and you feel yourself not being able to change direction or miss a throw in his case," he said. "It's when the pain starts to affect your ability on the field is when it really gets to you."

Most were disappointed with the chorus of boos Luck heard from fans as he left the Lucas Oil Stadium turf for the final time.

"It sucked," Brissett said, acknowledging Luck was at peace with the choice. "I mean you don't want to hear that, especially for a guy like that who's done what he's done and what he's been through."

But it didn't take the Colts long to move on from Saturday — or the announcement that shocked the football world.

"It's the same old, same old," Leonard said. "He's a great player, we respect everything Andrew does. But now we're focused on Jacoby Brissett and winning games."