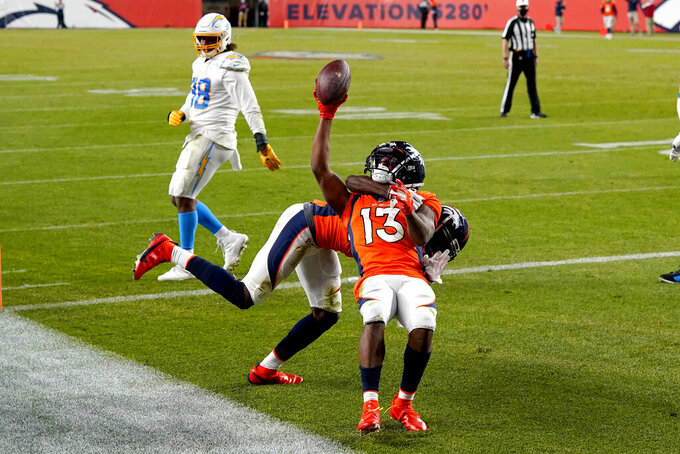 The lack of any sort of on-field response to Washington linebacker Jon Bostic’s dirty hit on quarterback Andy Dalton didn’t sit well with the Dallas Cowboys coach in Week 7.

No retaliation. No pushes or shoves. No jumping in to protect Dalton or stand up for him. Now, of course the NFL doesn’t encourage tit-for-tat antics, but McCarthy believes in the heat of the moment it’s all for one and all of that.

“We speak all the time about playing for one another, protecting one another,” McCarthy said after Dalton was knocked from the game and Bostic was ejected. “That was definitely probably not the response that you would expect.”

One official waived off the catch. Another raised his hands. After consulting, it was determined Hamler got his butt down inbounds. Tie game. Then, Brandon McManus’ extra point capped the comeback.

The Chargers were flagged on the extra point for lining up seven players on one side of the center, but before the call was explained and declined, Los Angeles nose tackle Linval Joseph spun Broncos center Patrick Morris, injuring the practice squad call-up's right arm.

The chippiness seemed to be a culmination of several things:

The hard-luck Chargers thought they held on for the win when Lock’s pass to Albert Okwuegbunam was incomplete on fourth-and-4 from the Los Angeles 18, but Brandon Facyson was whistled for pass interference, giving the Broncos the ball at the 1 with a second left.

Then, the Chargers thought Hamler tumbled out of the end zone before landing inbounds, which one official indicated before the touchdown was confirmed. When it was over, the Chargers had blown leads of 16 points or more in four consecutive games, an NFL record.

“Division rival, close game,” Chargers running back Justin Jackson explained, adding, “We weren’t too happy with 22′s hit on Buster,” referencing safety Kareem Jackson’s unflagged blasting of running back Troymaine Pope in the second half. “You’re just launching with your head. That’s not how you play football anymore.

“We wanted to get that call. It is what it is. Got to keep playing. It gets chippy. At the end of the game, I wasn’t on the field for that, so I don’t know what happened there.”

Broncos tackle Calvin Anderson was there, and he jumped to his teammate’s defense, going after Joseph in a scuffle that drew in several others but mostly involved pushing and shoving and grabbing and holding.

Shortly after Broncos coach Vic Fangio revealed on Monday that Morris suffered an arm injury when he was tossed to the ground after the PAT, Anderson tweeted an explanation for jumping into the fray himself.

“My boy Pat finally gets called up for a game yesterday and after the game is won, he gets grabbed by the neck while he’s on a knee and slammed to the ground, which injures him,” Anderson wrote.

He included a clip of the extra point, which shows the incident.

“I’ll never watch something weak like that happen to a defenseless teammate and not defend him,” Anderson added.

Amen, McCarthy must be thinking.

Wims appeared to tap Gardner-Johnson, who had his back turned, and then hauled off a right-handed sucker punch to Gardner-Johnson’s helmet, followed by several more shots to his face mask.

Saints cornerback Janoris Jenkins jumped on Wims and soon players from both teams rushed in to break up the ruckus. Wims emerged from the pileup clapping and smiling as he was ejected and escorted to his locker room.

“We talked to him and told him that’s not how things go here,” Bears coach Matt Nagy said.