Column: Gruden gone, and it couldn't have come fast enough 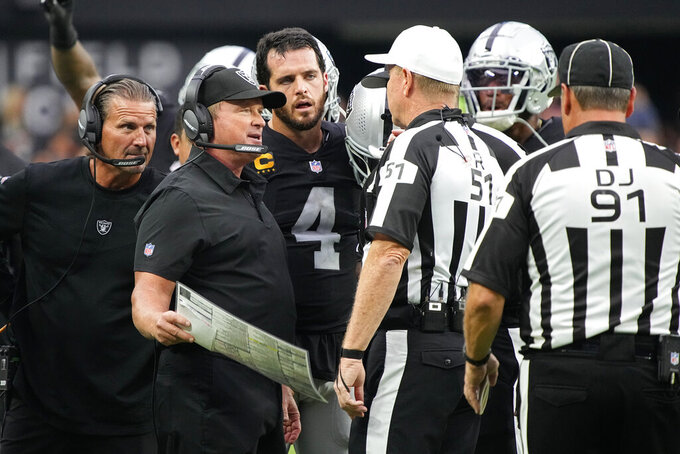 Jon Gruden might still be coaching had he merely been exposed as a remorseful racist.

His email about union chief DeMaurice Smith's lips was both disturbing and despicable, but it was from a decade ago when Gruden was not coaching in the NFL. And Gruden did apologize immediately, while insisting he doesn't have an “ounce of racism in me.”

No apology could be fast enough when even more emails followed.

The targets were many. The shots were crude.

The emails were exposed, and so was Gruden's real character.

An ounce of racism? How about a cup of misogyny? Maybe a full pint of homophobia?

Gruden is gone, and it couldn't have happened fast enough. The coach who had a meteoric rise to national prominence as a football coach and network TV analyst came crashing to earth even faster, done in by one cringeworthy email after another.

He leaves the Raiders with more than six years and $60 million left on the contract that enticed him back to coaching again. And he leaves with his reputation shredded after being caught in emails saying nasty things about everyone from Roger Goodell to former President Barack Obama.

He was a quarterback guru who won a Super Bowl as a young coach in Tampa Bay, then went on to a starring stint in primetime as an analyst on Monday Night Football. Now he's out of the NFL for what might be forever, and his supporters have fled with each new revelation.

Just how bad are the emails? So bad it's hard to find a group Gruden didn't single out.

According to the New York Times, he denigrated the idea of women referees, and exchanged pictures of NFL female cheerleaders wearing only bikini bottoms. He used homophobic slurs, and railed on against the drafting of gay players into the league.

The paper also said Gruden said a player who demonstrated during the national anthem should be fired and that he mocked a 2017 article about players calling on Goodell to support racial equality and criminal justice reform.

Oh, and he saved his worst homosexual name calling for the commissioner of the league that employed him.

This from a coach who in June welcomed Raiders defensive end Carl Nassib's announcement that he was gay by saying “I learned a long time ago that what makes a man different is what makes him great.”

That was always the problem with Gruden. You knew you probably shouldn't believe him, but you were never quite sure why.

Now we know. The emails reported Monday night by the Times say more about Gruden than any of the years he spent talking to the nation about football on network TV.

Then it became not a question of whether Gruden would resign, but when. About the same time the emails were published online, Raiders owner Mark Davis was discussing with Gruden the terms of his resignation.

“I love the Raiders and do not want to be a distraction,” Gruden said in a statement. "Thank you to all the players, coaches, staff, and fans of Raider Nation. I’m sorry, I never meant to hurt anyone.”

That was a far cry from just a few hours earlier when Gruden stood before reporters to discuss the Denver Broncos, telling them “I'm not going to answer all these questions today. I think I've addressed it already.”

The truth is, Gruden probably didn't mean to hurt anyone. He surely never thought his emails — mostly with Bruce Allen, former president of the Washington Football Team — would ever become public as part of a workplace misconduct investigation of the team.

The emails, mostly written during the time Gruden was an analyst on NFL Monday Night Football, stretch up to when he became coach of he Raiders in 2018 and paint a portrait of Gruden that is far different than the one he presents publicly.

He was likely already facing at least a suspension for the Smith email and it was hard to see a successful way forward for a coach who used racial tropes in a league where the majority of players are Black.

But Gruden was still holding onto hope. He still seemed convinced he would remain coach of the team and talked about some positive things that might be coming out in the coming days.

Now he's gone, and the NFL is a better place already.