Column: Raiders have always had issues but nothing like this 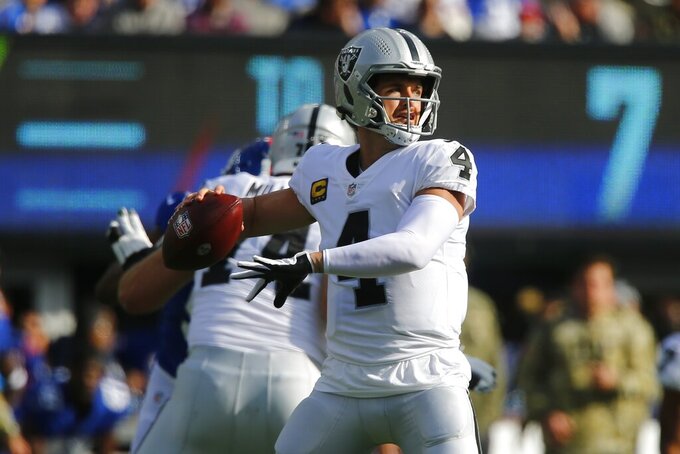 LAS VEGAS (AP) — Their $100 million coach is gone, his career destroyed by emails as vile as they were disturbing. The team president who spearheaded the Raiders' move to Las Vegas is looking for a new job, too, after reportedly botching some tax payments.

Their wide receiver of the future now has a future that likely includes prison after a woman died in a fiery crash he caused by driving drunk. The other first-round draft pick from last year was sent packing this week after a video surfaced of him, gun in hand, threatening someone’s life.

The Raiders have always had issues, but nothing like this. Their first season before paying fans in Las Vegas has been overshadowed by a tsunami of off-field events that have shaken the franchise to the core.

So far, at least, they’ve been able to compartmentalize enough to go 5-3 and share the lead in the AFC West. They play Sunday night at home against the Chiefs in a game that should offer more clues about their chances of making the playoffs for the first time in five years.

But players and fans alike both have to be wondering by now: Who’s running the ship — and how long can it stay afloat?

Owner Mark Davis, at least ostensibly, is in charge. General Manager Mike Mayock, too, though his ties to disgraced coach Jon Gruden might eventually prove his undoing.

It was Mayock who stood before reporters on Monday to announce that cornerback Damon Arnette, a 2020 first-round selection, was cut from the team after a series of off-field incidents. The final straw was a video posted online that showed Arnette threatening someone with a gun.

Even the Raiders have to draw the line somewhere.

“There have been a series of bad decisions over the last year or so, but we cannot stand for the video of Damon with a gun, threatening to take a life,” Mayock said.

Easy to say now. But Mayock acknowledged there was “significant concern” about Arnette’s character coming out of Ohio State — yet the Raiders drafted him anyway as part of a desperate attempt to rebuild the team’s pass defense.

Henry Ruggs III was different. The biggest concern about taking the speedy receiver from Alabama was whether he was worth the team’s first pick in the draft.

Then Ruggs sped through a residential area of Las Vegas, his Corvette reaching 156 mph before crashing into a car driven by a 23-year-old Las Vegas woman. Tina Tintor died, trapped with her dog in her burning vehicle as attempts by passers-by to get her out failed because of the intense flames.

Police say Ruggs was driving drunk, with a blood level double the state’s legal limit. He was formally charged Wednesday with a variety of crimes, including possession of a loaded gun, that could send him to prison for more than 50 years.

“Obviously, we just lost (Henry) Ruggs (III) and Arnette, our two first-round picks in a period of seven days,” Mayock said. “So, am I sick to my stomach right now on a lot of levels? Yes. I mentioned we found the risk acceptable after doing more homework on Arnette than anybody we’ve done in the years I’ve been here, and obviously we missed. That is 100% on me.”

How Davis views things is a little more difficult to figure out. Gruden was his prize hire, a nod to his late father, Al Davis, yet he was gone within days of his racist and misogynistic emails surfacing last month.

“I’ve never seen Jon exhibit any of those things in practice with the Raiders,” Davis said at the time. “He’s no longer the coach of the Raiders. It’s something that had to be done. It didn’t represent what the Raiders stand for.”

Also gone is former team president Marc Badain and several top financial people for what Davis said was an overpayment of taxes by the team. Badain was the point man in moving the Raiders from Oakland and getting the $1.9 billion Allegiant Stadium built on a site just off the Las Vegas Strip.

Through it all the Raiders have somehow managed a winning record, though a loss to the New York Giants over the weekend may have foreshadowed some of the team’s problems going forward. The Raiders have also been a hit in their new city, which spent $750 million in tax money to partially fund a gleaming new stadium to help lure the team from Oakland.

But even a Super Bowl win wouldn’t take the stain off this season. Not with everything that has happened, and certainly not with a young woman dead.

Tina Tintor was heading home after taking her dog for a walk when her life was suddenly snuffed out. She will be buried Thursday after a public service just a few miles from Allegiant Stadium.

The Raiders play there on Sunday, for those still inclined to cheer.