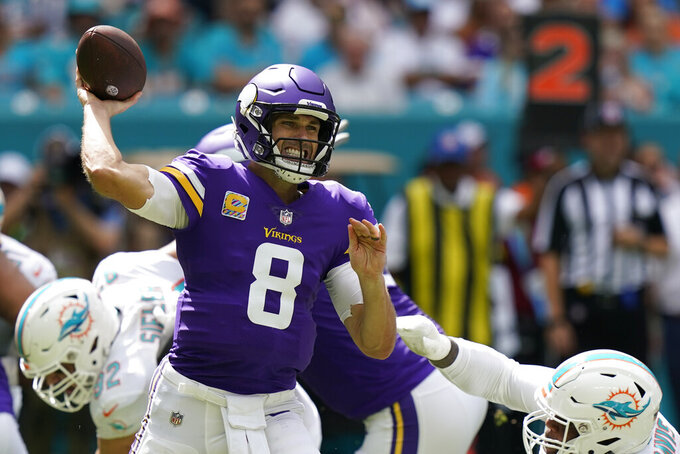 MIAMI GARDENS, Fla. (AP) — Dalvin Cook is very familiar with the Hard Rock Stadium end zones, having scored in them often in high school and college.

Playing less than 10 miles from where he shined as a prep, Cook rushed for a 53-yard insurance touchdown in the fourth quarter to give the Minnesota Vikings a 24-16 win over the injury-riddled Miami Dolphins on Sunday.

Cook said he had about 60 family members at the game.

“It was good seeing them out there and seeing the smiles on their faces when I walked through the tunnel," he said. "That was a moment that I'll always replay in my head for the rest of my life.”

Cook was quiet most of the afternoon until his score with 3:15 left restored a two-touchdown lead for Minnesota (5-1).

“I was hoping he’d tripped over the turf, the grass," said Dolphins quarterback Teddy Bridgewater, a former Viking and, like Cook, a South Florida native. "He’s a little bow-legged or parrot-toed, and sometimes when he runs, he trips. I was hoping he’d have one of those moments where he’d trip and our defense would get a stop. Hats off to the Vikings, man. They’re a great team.”

Miami (3-3) had rallied behind Bridgewater, who returned Sunday from concussion protocol but was only put into game action after third-stringer Skylar Thompson injured his thumb in the second quarter.

Before Cook's run, Dolphins receiver Jaylen Waddle fumbled on a drive when Miami was swiftly moving the ball down the field, trailing 16-10.

“I wish I had that one back,” Waddle said. "But it comes with the game.”

Vikings receiver Justin Jefferson, who entered the game as the NFL’s leader in receiving yards, had a 47-yard catch-and-run at the end of the third quarter — part of a six-catch, 107-yard performance. That set up a 2-yard touchdown catch by Adam Thielen to make it 16-3.

The Vikings defense came away with an interception and fumble recovery on the Dolphins’ next two possessions. Minnesota’s defense sacked Miami’s quarterbacks six times.

“We talked last night about any way it would take,” said Vikings coach Kevin O’Connell, “any means necessary to get to 5-1 going into this bye.”

Miami had three receivers — Waddle, Tyreek Hill and Gesicki — with at least six catches. Hill had 12 receptions for 177 receiving yards and Waddle had six catches for 129 yards. Gesicki caught the Dolphins only two touchdowns.

Thompson started in place of Bridgewater and Tua Tagovailoa. He didn’t return after injuring his thumb, marking the fourth consecutive game a Dolphins starting quarterback was injured.

Bridgewater replaced Thompson with about 11 minutes left in the first half after spending most of the week in the NFL’s concussion protocol. He finished with 329 yards, two touchdowns and two interceptions.

“The toughest part about this kind of situation is it’s similar to last week, man,” Bridgewater said, referring to his injury on the first offensive snap against the Jets. “Skylar had to get in there and just run plays that he didn’t really rep physically. It was the same today for me. Limited reps, but it’s the offense that I know.”

The Vikings got Jefferson and Thielen involved on their fifth possession of the game after four-consecutive three-and-outs. The result was a touchdown catch by tight end Irv Smith Jr. for a 7-3 lead.

“We still haven't played our best ball yet, honestly,” Jefferson said. “There's so many things that we need to fix. The plays are there, we just got to execute them.”

From the start, Thompson looked more comfortable throwing the ball than he did in last week’s loss to the Jets. But the Dolphins did little to help their rookie quarterback on their first two drives.

Thompson had an impressive third-down scramble on Miami’s opening drive, then followed with a throw to Gesicki in tight coverage for an 18-yard gain.

Miami’s offensive line, playing without starting left tackle Terron Armstead, allowed Patrick Jones to get through to Thompson untouched for an 8-yard sack that knocked the Dolphins out of field goal range.

Miami had another drive in the first half spoiled by five penalties over 10 plays, wiping out gains of 20, 32 and 9 yards.

Dolphins: CB Nik Needham tore an Achilles tendon in the second quarter and was ruled out for the season, a person with knowledge of the situation told The Associated Press on Sunday night. The person spoke on condition of anonymity because the team had not announced the severity of the injury. ... LB Trey Flowers injured his foot in the first quarter and did not return. ... DE Emmanuel Ogbah went to the locker room in the second quarter with a back injury but later returned. ... Keion Crossen (knee) left just before halftime and did not return. ... Waddle appeared to hurt his left shoulder after a 49-yard catch-and-run in the fourth quarter, but returned to the game — though coach Mike McDaniel suggested the injury may linger.

Vikings: Have a bye next week. Host Arizona on Oct. 30.