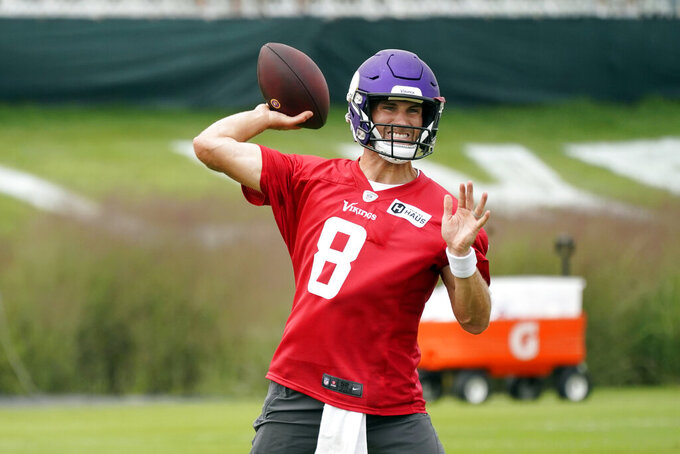 EAGAN, Minn. (AP) — Kirk Cousins returned to practice with the Minnesota Vikings and vowed to go to even greater lengths for social distancing in order to keep the virus away and stay on the field.

Setting up a Plexiglas barrier around his seat was one idea he's considered. Even “meeting outside under a goal post in January" was an extreme measure he said he'd be willing to take to avoid another absence related to the NFL's COVID-19 protocols.

Getting vaccinated would make all that easier, of course, and Cousins acknowledged the league's strong encouragement — still short of an outright mandate — for players to do so. He gave no indication he would reconsider his decision not to get vaccinated, which he called “a very private health matter.”

“I’m at peace with where I’m at, and I’ll follow the protocols vigilantly," Cousins said Thursday after being activated from the COVID-19 reserve list. He completed the NFL's required five-day quarantine for unvaccinated players deemed a high-risk close contact with an infected person.

“I do believe that as a leader of the team it’s very important to follow the protocols to avoid this close contact, because that is what it’s going to come down to," Cousins said.

The Vikings also activated Nate Stanley, bringing their quarterback cadre much closer to full strength after a tenuous stretch of practices in the early portion of camp. Mond remained on the reserve list and away from the team.

The reason Cousins triggered the high-risk close contact quarantine period, he said, was that the Vikings discovered the quarterback meeting room was too small to allow for proper distancing — not that he was actually too close to Mond. The quarterbacks have since moved to a different space.

"I worked on my own, did all the virtual meetings, was able to do the best I could with the situation we had. I do believe the protocols work, and that’s why I believe I didn’t have COVID after being in a meeting room like that, because the mask and the social distancing works," Cousins said.

Cousins, Mond and Stanley were sidelined Saturday, leaving Jake Browning — who is vaccinated and therefore not subject to the same quarantine protocols — as the only quarterback available for the open-to-the-public session that night. Danny Etling and Case Cookus were signed this week to help lighten the load on Browning in drills.

The league's updated virus protocols for 2021 allow vaccinated players to stay on schedule and continue practicing even if they experience close contact with an infected person, as long as they test negative themselves. Unvaccinated players are subject to the stricter 2020 rules for quarantining, testing and socializing.

The Vikings, as of Tuesday, had the lowest percentage (70) of vaccinated players in the NFL, according to a person with knowledge of the data. The person spoke to The Associated Press on condition of anonymity because the team-by-team figures were not being publicized. The leaguewide rate of players who've received at least one dose hit the 90% mark earlier this week.

Coach Mike Zimmer has bluntly expressed his frustration with the vaccine holdouts, not only in the locker room but in public, with the more contagious delta variant of the coronavirus fueling another nationwide surge in COVID-19 cases.

From a competitive standpoint, the scare of suddenly losing the starting quarterback to quarantine rather than injury or illness — dreading the possibility of a costlier such setback in the regular season — made Zimmer even more exasperated with Cousins and the others on the team who have opted against getting the shots.

“I’m done talking about vaccinations. I’m out of that business,” Zimmer said Wednesday. He was not available to the media Thursday.

Cousins said his relationship with the head coach is “absolutely” fine after a “tremendous” phone conversation Wednesday between the two.

“Great dialogue,” Cousins said. “I’ll leave my discussion with him with him, but it was a very, very positive discussion. Came away feeling great.”

Cousins has started his 10th year in the NFL, his fourth with the Vikings. His salary cap charge ($31 million) is the second highest in the league this season, behind Seattle quarterback Russell Wilson. Cousins has a fully guaranteed $35 million salary on the books for 2022, with a $45 million hit to the salary cap in the final year of his current contract. The Vikings drafted Mond in the third round.

For all the strides Browning might have made the last two years on the practice squad and even this week as the top man on the depth chart and for all the potential Mond might possess, the 2021 offense remains firmly in the hands of Cousins.

Cousins has never missed a game to injury, is one of the most accurate passers in the game and threw a career-best 35 touchdown passes last year. Cousins is the only viable quarterback for the Vikings at this point, so in a pivotal season for Zimmer and several others in the organization they simply can't afford to have him sidelined.

“You can’t play in a game with COVID regardless of your vaccination status, so the key will be not being a close contact,” Cousins said. “That will be the focus, and we have to be very vigilant to make sure that does not happen.”