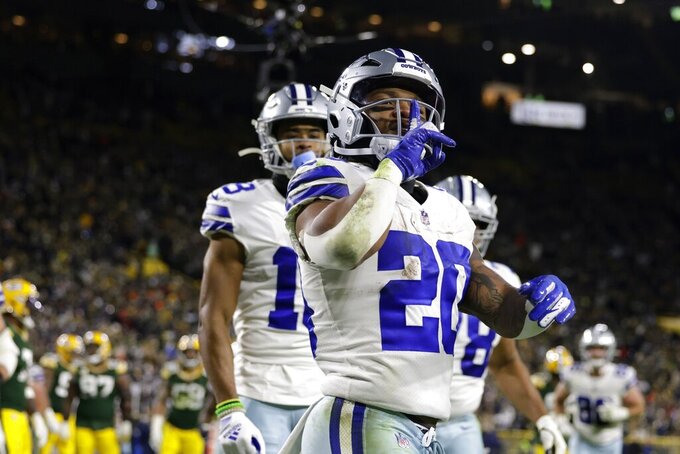 FRISCO, Texas (AP) — Dallas coach Mike McCarthy keeps telling his staff he would attack the run defense if he had to set up a game plan against the Cowboys.

The opponents keep proving him right.

Aaron Rodgers and the Green Bay Packers scored most of their points with the passing game in a 31-28 overtime victory over Dallas on Sunday. But the running game fueled everything.

The Packers had 207 yards rushing, which means the Cowboys have allowed at least 200 yards on the ground in consecutive games for just the third time in 36 years.

Rodgers had the second-lowest percentage of pass plays in 15 seasons as Green Bay's starter (37.5%), and the Packers kept running even when trailing by two touchdowns in the fourth quarter.

The Cowboys (6-3) lost for the first time in franchise history when taking a lead of at least 14 points into the fourth.

“It’s going to keep happening until we stop it,” said linebacker Micah Parsons, the star of one of the league's best pass-rushing units. “We can rush as much as we want, but until we put this flame out of this running-the-ball stuff, we’re never going to be as good as we need to be.”

Safety Malik Hooker agrees, and he pointed out the next three opponents: Minnesota (Dalvin Cook) on Sunday, the New York Giants (Saquon Barkley) on Thanksgiving and Indianapolis (Jonathan Taylor) on Dec. 4.

Cook finished second in the NFL in rushing two years ago, the Cowboys know the threat of Barkley all too well as NFC East rivals and Taylor is the reigning rushing champ.

Green Bay's Aaron Jones had 138 yards against a defense that sometimes loses containment outside and other times allows big running lanes inside.

“I feel like that’s something right now we’ve been having an issue with,” Hooker said after Dallas sunk to 29th against the run. “That’s definitely a fire we’ve got to work on and fix that up right now.”

Asked about his level of concern for the run defense last week, defensive coordinator Dan Quinn said the number of points allowed was his first priority.

Quinn can add that the list. The Cowboys have allowed an average of 30 against Chicago (a 49-29 Dallas win ) and the Packers, the worst two-game stretch since Quinn took over last year.

Dallas was second in the NFL in scoring defense before playing the Bears.

“Everybody is going to try and run the ball against us because it is the way we are built,” McCarthy said after his return to Green Bay, where he was a Super Bowl-winning coach, was ruined by a late collapse that included his failed fourth-down decision in OT.

RB Tony Pollard is 2 for 2 in 100-yard games with Ezekiel Elliott sidelined by a knee injury. It's the first time Elliott has missed consecutive games because of injury in his seven seasons.

Pollard had 115 yards with a touchdown on a career-high 22 carries. The fourth-year back tied his best with 131 yards against Chicago and had a career-high three TDs.

QB Dak Prescott has four interceptions through four games for the first time in his seven-year career. He missed five games with a broken thumb on his throwing hand.

When he was the NFL Offensive Rookie of the Year in 2016, Prescott didn't throw his first interception until his sixth game (in a victory at Green Bay, by the way). The Cowboys need something closer to that since they're built around the running game and defense.

WR CeeDee Lamb had Dallas' first 100-yard receiving game of the season, with career highs in yards (150) and catches (11). His two touchdowns tied his best. It hurt the Cowboys to waste that effort considering they've been waiting for him to break out in the No. 1 receiving role.

Parsons was forced to spend more time at his traditional position against the Bears and Packers after linebacker Anthony Barr injured a hamstring chasing Chicago QB Justin Fields.

That means fewer pass rush attempts for Parsons, and the young star has struggled to boost the run defense.

Elliott was listed as questionable against the Packers, so a return seems likely against the Vikings. ... CB Anthony Brown left the Green Bay game with a concussion. ... Barr might miss a matchup against his former team in Minnesota. He didn't practice at all last week after getting injured against Chicago before the bye.

195-0 — The Cowboys' record when leading by at least 14 points entering the fourth quarter before the loss to the Packers.

Dallas is in the middle of its annual routine of three games in 12 days. A four-game stretch against the NFC North (2-1 so far) ends against the Vikings. The Cowboys are going for a season sweep of the Giants, which could be crucial because both are playoff contenders.