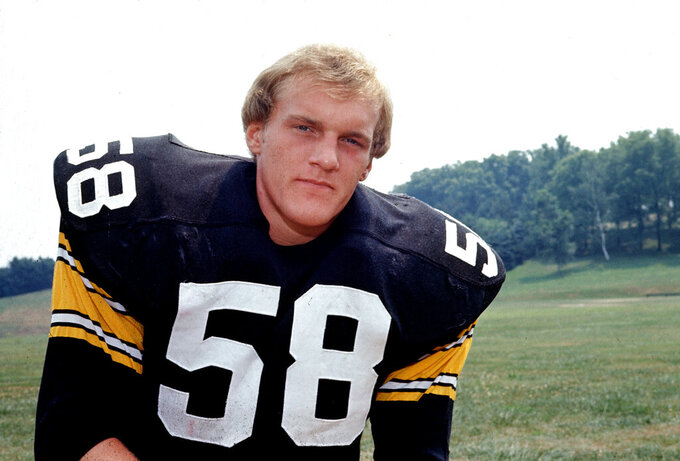 BEST SECOND-ROUND DRAFT PICK: LBs Jack Ham and Jack Lambert. Taken three years apart — Ham in 1971, Lambert in 1974 in a draft class that eventually produced four Hall of Famers, not including undrafted rookie Donnie Shell, who will head to the Hall this fall. Ham and Lambert took two very different approaches to their jobs, with equal success. The cerebral Ham was a six-time All-Pro. The menacing Lambert earned All-Pro honors five times. Both retired with four Super Bowl rings while serving as the standard by which all Steelers linebackers are judged to this day.

BEST LATE-ROUND DRAFT PICK: WR Antonio Brown. There was a time, believe it or not, when Brown wasn't an all-world talent with a penchant for self-destruction, but a sixth-round pick hoping to carve a niche in the NFL. He did with a clutch grab in the 2010 AFC championship game as a rookie before rocketing to stardom as one of the league's most electrifying players. The only player with five consecutive 100-catch seasons had an ugly falling out with the team at the end of the 2018 season. Brown is now looking for work.

WORST FIRST-ROUND DRAFT PICK: LB Huey Richardson. The list of decorated Steelers linebackers is long. Richardson is not on it. Taken 15th overall in 1991, the team hoped Richardson could pair with Greg Lloyd for a top pass-rush tandem. It never happened. Richardson had all of three tackles as a rookie. When Bill Cowher replaced Noll as head coach in 1992, Pittsburgh stunningly cut Richardson. A year later, Richardson was out of football completely. Honorable mention: fullback Dick Leftridge. Taken third overall in 1966, Leftridge played four — yes four — games in the NFL, with eight carries for 17 yards.

WORST SECOND-ROUND DRAFT PICK: DE Willie Fry. There have been higher-profile busts (WR Limas Sweed in 2009 anybody?) but Fry's failure to gain traction remains a mystery. The Steelers took the two-time Notre Dame captain 49th overall in 1978. The opportunity to learn at the hand of Greene, L.C. Greenwood and Dwight White never materialized. Fry missed his entire rookie season with a hand injury and sat out all of 1979 because of a separated shoulder. Fry was never officially awarded a jersey number, never appeared in a regular-season game.

BEST DRAFT TRADE: The Steelers have typically played it safe with their first-round picks, content to settle into their allotted spot and let the scouts do the work. Then again, there was nothing typical about Polamalu. Pittsburgh's front office was convinced the instinctive and well-coiffed Southern California safety was the missing link on a defense frequently good but not quite great. Over the next 12 years, Polamalu helped redefine the position. His unparalleled sense of the game earned the trust of Hall of Fame defensive coordinator Dick LeBeau, who often let Polamalu do his thing. Frequently, it was the right thing. A seven-time Pro Bowler, five-time All-Pro and two-time Super Bowl champion, Polamalu slipped quietly into retirement in 2015 and was elected to the Hall of Fame on the first ballot in February.

WORST DRAFT TRADE: How about weirdest? The Steelers sent two picks to Green Bay in 2007 to take Daniel Sepulveda — a punter — in the fourth round. While Sepulveda was serviceable when healthy (rarely a given), trading an extra pick for a position that's among the most replaceable in the game is odd.

DID YOU KNOW THEY ONCE DRAFTED?: Byron “Whizzer” White played just one season for the Steelers, though the first-round pick in 1938 was hardly a bust. He led the NFL in rushing as a tailback, then left to attend Oxford University on a Rhodes Scholarship. It was a sign of where White's true talents lie. White went into law and served 31 years on the U.S. Supreme Court.