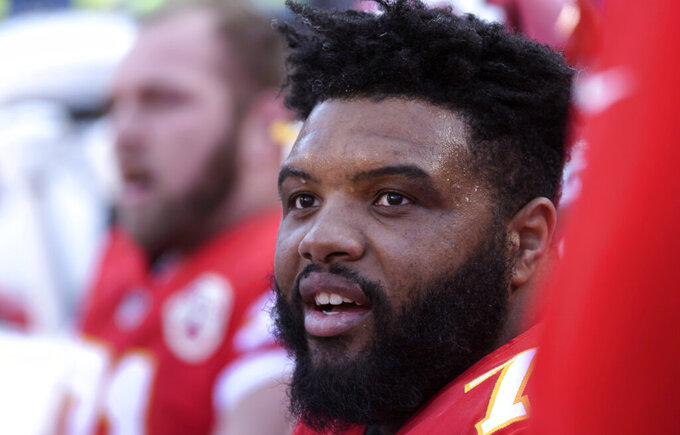 FILE - In this Dec. 9, 2018, file photo, Kansas City Chiefs offensive tackle Jeff Allen during the first half of an NFL football game in Kansas City, Mo. Allen thanked the man who helped pull his vehicle out of the snow with tickets to next week's AFC Championship game. Allen said he got stuck on the way to Arrowhead Stadium on Saturday, Jan. 12, 2019, because of the snow, but he made it in time for the Chief's victory over the Indianapolis Colts because of the Good Samaritan. (AP Photo/Reed Hoffmann, File)

KANSAS CITY, Mo. (AP) — A random act of kindness has netted AFC Championship tickets for a man called Dave who helped dig a Kansas City Chief out of the snow.

Offensive linesman Jeff Allen posted on Twitter that his car got stuck as he was heading to Arrowhead Stadium to take on the Indianapolis Colts in Saturday's playoff. Allen says "a nice guy named Dave," who didn't know he is a Chief, got him back on the road.

The Chicago native asked his 21,000-plus followers to help him track down the Good Samaritan so he could reward him with tickets.

Hundreds of people replied — many claiming to be Dave — and thousands retweeted the plea.

On Sunday, Allen tweeted that he has found the real Dave "despite the recent influx in people changing their name to Dave in the KC area lol."