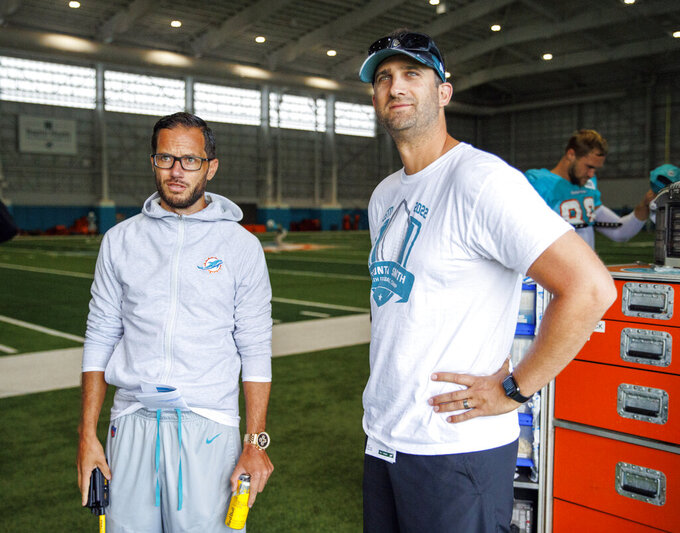 “That was a unique curveball early this morning,” McDaniel said. “We don’t really know totally where it was coming from and are just trying to be overly cautious.”

The Dolphins, as of now, will still play the Eagles on Saturday night at Hard Rock Stadium in their preseason finale. It isn't yet known which of the starters, if any, will play.

Eagles coach Nick Sirianni said no one on the team had exhibited any stomach bug symptoms. The Eagles held their own practice Thursday.

The Eagles and Dolphins practiced jointly on Wednesday in a session that highlighted what is expected to be a formidable connection between quarterback Tua Tagovailoa and receiver Tyreek Hill, who the team traded for in the offseason.

Hill caught a 30-plus-yard touchdown pass from Tagovailoa, beating veteran cornerback Darius Slay on a play. Slay appeared to be limping after, and he grimaced as he walked back to the sideline. He was in and out of practice for the rest of the day.

The same quickness and speed that Hill displayed in his career as a Kansas City Chief seemed to present issues for the Eagles secondary on Thursday as he continued to find soft spots in the coverage for wide open catches.

Tagovailoa, who is entering his third year in the NFL, showed timing and accuracy in his throws, getting the ball out quickly on one play when the Eagles sent a blitz and spreading the ball to multiple receivers.

Eagles receiver A.J. Brown, who was traded from the Titans earlier this year, opened the joint session for the Eagles' first-team offense with a one-handed snag as he darted past Dolphins defensive back Xavien Howard.

The Eagles defensive front stopped most of Miami’s attempts at running the ball. Most of the Dolphins’ rushing attempts were either stopped for losses or short gains, which is an extension of their run game so far in the preseason.

“More than anything really this preseason, we haven’t got stuff going because it’s been one or two guys off, which I’m more concerned about the players, whether they learn from that or not,” McDaniel said. “Joint practices generally you’re a little more comfortable doing, not the one-on-one version of your run game, pass game, defense.”

NOTES: Dolphins receiver Jaylen Waddle, who was held out of practices last week due to an undisclosed injury, returned this week. He didn't participate in team drills Wednesday, but he did get work on the jug machine after practice ended. DeVonta Smith, his former Alabama teammate, later joined him. ... Cornerback Nik Needham, who was hurt in the first quarter last week against the Raiders, left practice early and didn't return. McDaniel said he is day to day, but the injury is “nothing to be concerned about.”