For Dolphins, it's simple math: 2 wins, and playoffs await 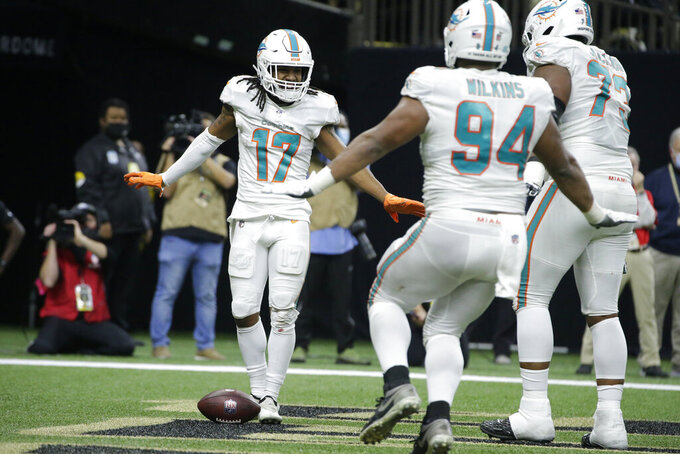 Miami Dolphins' Jaylen Waddle (17) celebrates with teammates after scoring a touchdown against the New Orleans Saints during the second half of an NFL football game Monday, Dec. 27, 2021, in New Orleans. (AP Photo/Butch Dill)

MIAMI GARDENS, Fla. (AP) — Beat Tennessee this week, beat New England the week after that, and the Miami Dolphins are going to the playoffs.

It won’t be easy.

The Dolphins probably won’t be favored against the Titans, might not even be favored in the finale against the Patriots either, but at this point nothing Miami pulls off would be surprising. The Dolphins — 1-7 two months ago — are 8-7 now, engineers of perhaps the most improbable turnaround in NFL history.

And with that, Miami is holding down the No. 7 spot in the AFC playoff standings.

“We just stayed the course throughout the whole season,” defensive lineman Christian Wilkins said after Miami moved into that No. 7 spot by beating New Orleans 20-3 on Monday night. “We didn’t grow weary. We just stuck with the program and the things we knew.”

Of course, the Dolphins would cringe at use of the word “improbable” to describe how their fortunes have completely flipped over the past two months. They don’t even look at this run as a seven-game winning streak, but instead a series of seven different one-game streaks.

It’s an intentionally simple approach, and it has worked.

“There’s distractions always when things aren’t going your way,” Dolphins coach Brian Flores said. “It just reveals a lot about a lot of things, I would say. Look, I’ve always had belief in this team, our players, our coaches. Maybe there were some people who didn’t share that same belief and I understand why. But at the end of the day, it’s not about anyone else. It’s about the guys in that locker room, the guys in our building, the people in our building.

“We believe in each other and at the end of the day, that’s all that matters.”

The defense, particularly the defensive line. Miami leads the NFL with 45 sacks, one more than Tampa Bay and Minnesota. The Dolphins have never finished a season atop the NFL sacks total, already have matched their highest single-season sack total since 2006 and are four shy of the club record of 49 set in 1983 and matched in 2005. Miami has limited opponents to 250 total yards or fewer in four consecutive games, a streak the likes of which the Dolphins hadn't put together since 1990.

Short-yardage situations. The Dolphins have taken to putting Jacoby Brissett in at quarterback for certain third-and-1 and fourth-and-1 situations in recent weeks, which seems like a great idea if they were going to use his size to plunge forward and sneak for the first down. But they’ve often had him rolling out on those plays, with limited success.

WR Mack Hollins. He made two brilliant plays Monday night, a falling down 40-yard catch while some might argue he was being interfered with, then hustling to down a late punt inside the New Orleans 1 as the Dolphins were finishing off the win.

QB Tua Tagovailoa. The numbers were fine — 73% completions, one touchdown, one interception — but he wasn’t as sharp as he'd been earlier in this winning streak, missed some throws and ball security was an issue again. That said, he also took some monster hits and didn’t seem fazed, but he’ll likely need to be much more effective if the Dolphins are going to finish off this playoff run.

7 — This is the seventh time in Dolphins history — including regular season and playoffs — that they have won at least seven consecutive games. The first six streaks were all done with Don Shula coaching, the most recent of those coming 35 years ago. And the previous time the Dolphins won seven straight, all by at least seven points, was 1984, also under Shula.

The Dolphins visit former Miami quarterback Ryan Tannehill — who was oft-maligned during his Dolphins days — and the Tennessee Titans on Sunday, in a game with massive postseason implications for both teams. Tannehill got Miami to the playoffs in the 2016 season, but couldn’t play in the wild-card loss at Pittsburgh because of a knee injury.