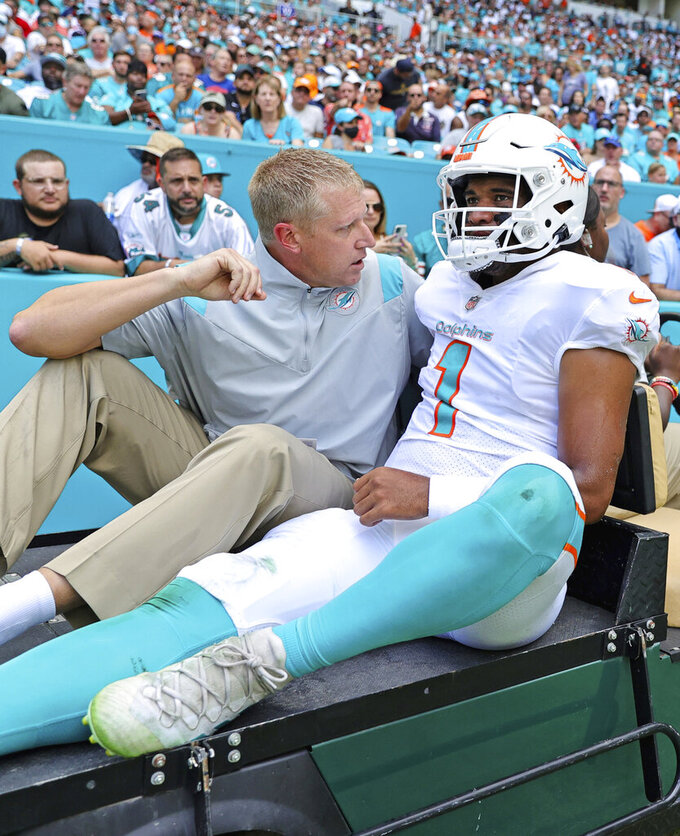 Miami Dolphins quarterback Tua Tagovailoa (1) carted out the field after getting injured in a play during the first quarter of an NFL football game against the Buffalo Bills at Hard Rock Stadium, Sunday, Sept. 19, 2021 in Miami Gardens, Fla.(David Santiago/Miami Herald via AP)

MIAMI GARDENS, Fla. (AP) — Quarterback Tua Tagovailoa was placed on injured reserve by the Miami Dolphins on Saturday, meaning he will miss at least three games before he can return from fractured ribs.

Tagovailoa had already been ruled out for Sunday’s game at Las Vegas, with Jacoby Brissett set to start for the Dolphins and Reid Sinnett getting promoted from the practice squad in order to serve as the backup.

Tagovailoa will also miss games on Oct. 3 against Indianapolis and Oct. 10 against Tampa Bay, at minimum. The earliest he could return is an Oct. 17 game in London against Jacksonville.

He was injured after eight plays in last weekend’s 35-0 loss to Buffalo, leaving after Miami’s second series and not returning. Brissett played the rest of the way in that game.

Initially, the Dolphins thought — or at least hoped — that Tagovailoa was dealing with only bruised ribs. Further evaluation showed the fractures, and Brissett said he was told Wednesday that he would be the starter for at least this week at Las Vegas.

“So far this week, I think he’s done a nice job from a preparation standpoint," Dolphins coach Brian Flores said Friday of Brissett, who is 12-20 as a starter. “He’s in here, he’s meeting with his teammates, he’s watching the film, asking questions."

Flores said multiple times this week that Tagovailoa's condition is improving, though he noted Friday that the team was having conversations and “gathering information" about what to do from a roster-spot standpoint.

By Saturday, the path was apparently clear and the move was made.

Tagovailoa’s injury history is well-chronicled and was a source of concern for teams evaluating him ahead of the 2020 NFL draft after a serious hip injury ended his college career at Alabama. The left-hander has had surgery on both ankles and the index finger of his throwing hand, plus suffered a broken nose and a concussion while in college.

Meanwhile, the Dolphins also announced Saturday that linebackers coach Anthony Campanile will not be with the team in Las Vegas because of COVID-19 protocols. The Dolphins will already be without outside linebackers coach Rob Leonard this weekend for the same reason. They either tested positive or are presumed to have been in close contact with someone who has tested positive.