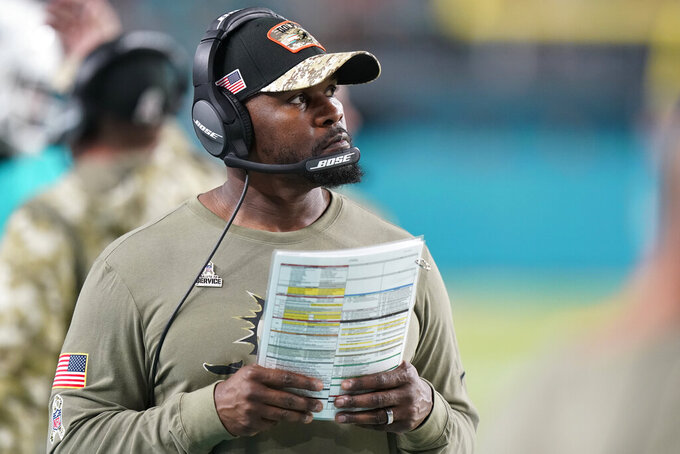 Miami Dolphins head coach Brian Flores watches the game from the sidelines during the first half of an NFL football game against the Baltimore Ravens, Thursday, Nov. 11, 2021, in Miami Gardens, Fla. (AP Photo/Wilfredo Lee)

MIAMI GARDENS, Fla. (AP) — There’s nothing that impressive about a 5-7 record.

This is the mission for the Miami Dolphins this week, to get to 5-7 after losing seven of their first eight games to start a season. They’ll try to win their fourth consecutive game when they play host to Cam Newton and the Carolina Panthers (5-6) on Sunday.

“I don’t really get into losing streak, winning streak, momentum and not having momentum,” Dolphins coach Brian Flores said. “I try to stay the same either way and that’s the message I give to the players. There’s always emotion involved with winning and losing. You try to build on the winning and you try to learn from the mistakes and adversity of not having success. In both instances, there’s an opportunity to motivate.”

The 1984 Green Bay Packers are the only team to have started 1-0, then lost their next seven, then won their next four. The Dolphins now have a chance to pull off that same statistical oddity.

For Miami, 5-7 is the obvious target for the week. For Carolina, though, being 5-7 on Sunday night would be a problem.

The Panthers start the weekend ninth in the NFC, two spots out of the last wild-card slot. A setback now would only make the postseason climb that much steeper.

“We have to play our best game against Miami,” Panthers coach Matt Rhule said. “And then we take a week off, I want our guys to recharge, and then we come back and we have five games, four of which are conference games and we need to not worry about anything -- standings, what other teams do. We just need to worry about ourselves and playing good football.”

Much like the Dolphins, the Panthers are having a topsy-turvy season. They started 3-0, then lost their next four, then alternated wins and losses since. They’re 5-0 when holding teams to 82 rushing yards or less, 0-6 otherwise.

Newton, Carolina’s expected starter at quarterback, is 3-1 against Miami, including going 1-1 last season when he was with New England. Flores said the Dolphins haven’t seen any rust on Newton even though he missed the first half of the season.

Penalties are a big area of concern for both teams. Carolina has been flagged 81 times, the most of any team in the NFL, and Miami has drawn 75 penalties.

“Once you get that reputation, it’s kind of on you,” Rhule said about the Panthers’ penalty penchant.

Flores said avoiding penalties is a regular point of emphasis in practice for the Dolphins, one that was reiterated this week.

Panthers RB Christian McCaffrey is expected to play in his fourth consecutive game Sunday after missing six weeks with a hamstring issue. He got 17 touches in last week’s loss to Washington, had a touchdown catch — his first TD since Week 2 — and was part of Carolina’s two longest plays in that game. He had a 27-yard catch from Newton for the score and was part of a 30-yard gain after a 15-yard run saw 15 more yards tacked on after a Washington horse-collar tackle. He says sustaining drives will be big this week.

“We have to find ways to convert on third down,” McCaffrey said.

Dolphins TE Mike Gesicki, who needs a contract for 2022, is lobbying the team for a new deal. Thing is, it’s not for him. Gesicki is actively campaigning for TE Durham Smythe to get a new contract from the Dolphins. “I like when people get what they deserve,” Gesicki said.