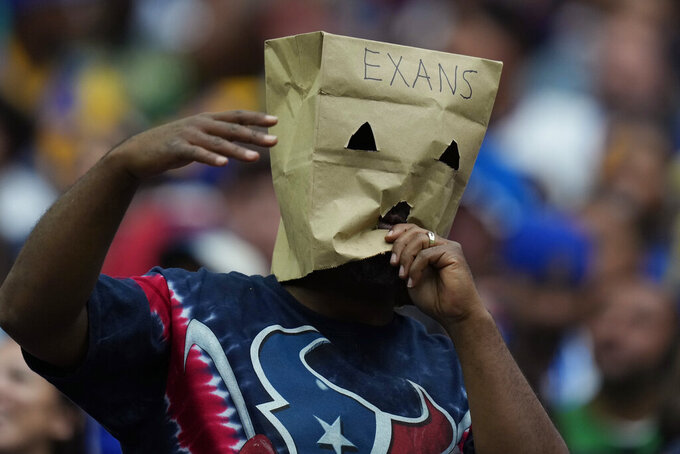 A Houston Texans fans wears a sack over his head during the team's loss during second half of an NFL football game against the Los Angeles Rams, Sunday, Oct. 31, 2021, in Houston. (AP Photo/Eric Smith) 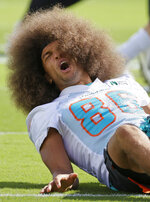 OPENING LINE: Miami by 6.5, according to FanDuel SportsBook.

TURNOVER DIFFERENTIAL: Texans minus-4; Dolphins minus-4.

TEXANS PLAYER TO WATCH: TE Brevin Jordan is coming back to his collegiate field, and the former Miami standout got the first NFL touchdown reception of his career last week to cap Houston's run of 22 unanswered points in the loss to the Rams.

DOLPHINS PLAYER TO WATCH: QB Tua Tagovailoa has gotten through the trade deadline without the Dolphins making a move, and the team’s last nine games will either cement his future as Miami’s starter or fuel up the trade speculation again after the season.

KEY MATCHUP: Running games. Neither of these teams have run the ball well this season. The team that figures out how to get a few yards on the ground here and there on Sunday will make life easier for its quarterback and reap a huge benefit.

KEY INJURIES: For Houston, QB Tyrod Taylor (hamstring) will play for the first time since Week 2. The Texans said Thursday that he'll start. LB Christian Kirksey (thumb) played with a club protecting his hand last week. LB Hardy Nickerson (concussion), RB Rex Burkhead (hip) and WR Chris Conley (calf) also have been limited of late. For Miami, Tagovailoa now has a finger issue on his left hand to go along with his ongoing recovery from fractured ribs. LB Jerome Baker (knee) is a big key for the Dolphins and he entered the week unsure if he'd be ready.

SERIES NOTES: No team has a better record against the Dolphins than Houston. The Texans are one of eight franchises with a winning record against the Dolphins. ... Miami’s only win in the series was in 2015, when Ryan Tannehill had four TD passes in the game’s first 16 minutes on the way to a 41-0 halftime lead. ... Deshaun Watson passed for five touchdowns in the teams’ most recent meeting in 2018. ... Brian Flores will be the fifth Miami coach in the last five Dolphins-Texans games (Tony Sparano in 2011, Joe Philbin in 2012, Dan Campbell in 2015, Adam Gase in 2018).

STATS AND STUFF: This will be the second game in NFL history when both teams enter with 1-7 records, the other being Carolina vs. San Francisco in 2004. ... In Miami’s 2015 win over Houston, Tannehill had three TD throws of at least 50 yards in the game’s first 16 minutes. Meanwhile, going back to last season, the Dolphins have not had a pass of 50 or more yards in their last 553 minutes. ... Houston has been outscored 133-29 on the road this season, and by a staggering 109-8 count since midway through the fourth quarter of its road opener at Cleveland. The Texans have two field goals, a safety and nine turnovers in their last three road games. ... ... A start Sunday would be the 100th of Houston WR Brandin Cooks’ career. He needs 35 yards receiving to reach 7,500 in his career. ... Texans QB Davis Mills had two 300-yard passing games in his last four outings, and his completion percentage — 71.8% — in that four-game span (among players with at least 10 throws) is better than everyone in the NFL besides Mike White and Derek Carr (both 74.0%). ... The teams have combined for four of the nine lowest total-yardage game outputs in the NFL this season (Houston has three, Miami one). ... The Dolphins have four rushing touchdowns, with only one from an actual running back.