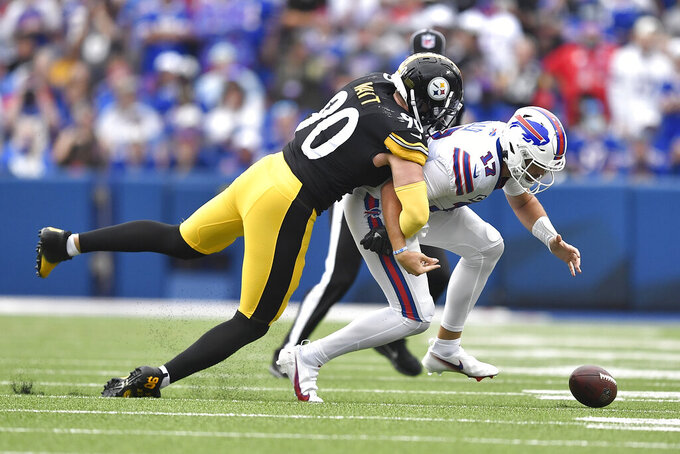 Buffalo Bills quarterback Josh Allen (17) fumbles as he is tackled by Pittsburgh Steelers outside linebacker T.J. Watt during the first half of an NFL football game in Orchard Park, N.Y., Sunday, Sept. 12, 2021. The Steelers recovered the ball. (AP Photo/Adrian Kraus)

PITTSBURGH (AP) — The Pittsburgh Steelers could have sent the house at Josh Allen. It would have been understandable. Preferable even.

Yet they didn't. Mostly because they didn't have to. Perhaps even more importantly, they didn't need to. For all but a handful of snaps during a season-opening victory over the Bills last Sunday, the Steelers let their defensive line and edge rusher T.J. Watt go it alone while trying to make Allen's job difficult.

It worked. The Steelers ended up sacking Allen three times — two of them courtesy of Watt, the NFL's newly minted highest-paid defender — and never let the Bills star get into a rhythm during a dominant second half. No extra bodies or complicated schemes required.

And while coach Mike Tomlin insists his team's almost passive approach to creating pressure on Allen is not a sign of things to come, it gives Tomlin and Steelers defensive coordinator Keith Butler another option at their disposal heading into Sunday's visit by the Las Vegas Raiders (1-0).

Allen had little time to set his feet and look downfield and when he did, he often saw a sea of black jerseys dropping into coverage. The Steelers blitzed just a handful of times on Allen's 54 drop-backs and with no big plays available, he often checked down to underneath routes.

Only one of his 30 completions went for more than 16 yards and one of the league's most potent dual-threat quarterbacks used his legs not to make plays, but to keep the likes of Watt and defensive end Cam Heyward at bay.

It rarely worked, particularly over the final two quarters as the Steelers rallied from 10 points down to win. Despite skipping 11-on-11 drills for all of training camp, Watt looked his usual disruptive self while chasing Allen all over Highmark Stadium. Watt often chased Allen into the awaiting arms of Heyward.

The 32-year-old Heyward looked downright spry on the first game of his 11th season, the team's second-longest tenured player consistently creating an issue for a Buffalo offensive line that looked physically overmatched at times.

“I’m going to continue to joke about Cam’s age,” Tomlin said with a laugh. “We’re all motivated in different ways. Cam is one of those guys that’s always looking for reasons to rise up in the face of something. You throw his age in his face, and even though he knows what you’re doing, he has to respond.”

So do the young — and not-so young in the 34-year-old Alualu's case — men trying to follow Heyward's example. The Steelers are playing without starting defensive end Stephon Tuitt, who is on injured reserve while recovering from a knee injury. Chris Wormley built off a solid training camp by playing 40 snaps. Second-year defensive tackle Carlos Davis played 17. Isaiah Buggs played eight.

They weren't always dominant, but they were consistently effective, particularly when it mattered. The Bills missed on a pair of fourth-down attempts in Pittsburgh territory in the second half and both failed miserably. Allen chucked it incomplete on fourth-and-8 at the Pittsburgh 35 in the third quarter and Matt Breida was stuffed for a 7-yard loss on fourth-and-1 at the Pittsburgh 41 early in the fourth.

The stops — fueled by solid play on third downs — helped shift momentum for a rally that looked improbable during a sometimes listless first half.

The Raiders provide a slightly different challenge. Las Vegas quarterback Derek Carr lit up Baltimore for 409 yards passing in an overtime victory on Monday night. The Ravens did sack Carr three times and pick him off once, but did little late as Las Vegas scored 16 of the game's last 19 points to pull out a thriller.

While Tomlin stressed the sit-back approach the team took against Allen was the best plan to beating the Bills, that doesn't mean the Steelers will do it against the Raiders.

Then again, given how well the secondary played while the front four chased Allen, throwing as many men into coverage in hopes of slowing down Las Vegas star tight end Darren Waller might be the way to go.

The Steelers, unlike most teams, can game plan knowing they don't have to sell out on a blitz to rattle the opposing quarterback. It also means they can experiment in how they line up, a mini head game within the game.

“If teams are expecting a blitz and we don't, it probably messes up some of their protection,” Alualu said. ”Somebody might come free and we get to win those one-on-one blocks and get to the quarterback."

NOTES: QB Ben Roethlisberger and WR JuJu Smith-Schuster were given the day off Wednesday. ... Davis (knee) and LB Rob Spillane (shin) were limited.