Execution, not creativity the priority for Patriots offense 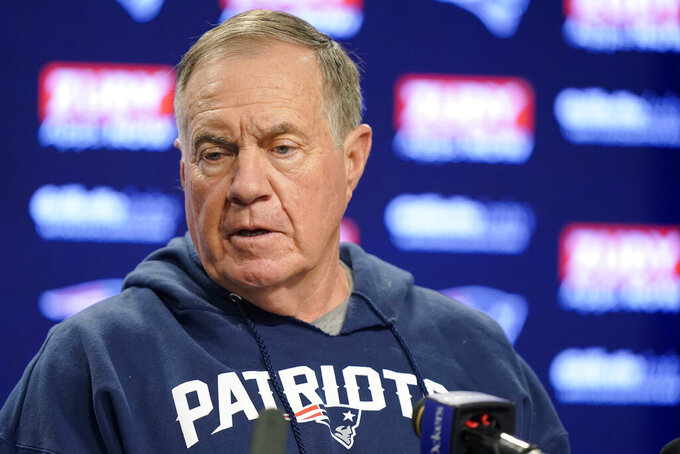 FOXBOROUGH, Mass. (AP) — If the Patriots are going to fix their ongoing issues on offense, they will have to start by perfecting the things they’ve been struggling to do consistently over their first 12 games.

On Tuesday, coach Bill Belichick doubled down on what he said during an appearance on Boston’s WEEI radio on Monday, saying that major changes offensively simply aren’t feasible at this point of the season.

New England’s offensive rankings have slumped across the board as the season has progressed.

It is averaging just 20.75 points per game, which ranks 20th and it is currently tied with Denver for last in the league in red zone efficiency, having scored a touchdown on just 37.5% of its trips inside the 20-yard line (12 of 32).

But execution, not creativity, is the priority this week Belichick insisted as the Patriots (6-6) prepare to visit Arizona (4-8), losers of two straight and four of its past five.

“The system that we have in place I feel good about,” Belichick said. “Which includes the offensive staff, it includes me, it includes whatever the whole process is.”

That process clearly isn’t progressing as fast as his players would like.

In a rare show of outward frustration, quarterback Mac Jones was captured by TV cameras expressing a need for throwing the ball deeper downfield during the Patriots' 24-10 loss to Buffalo last week.

The numbers back up those concerns.

Jones is averaging just 5.3 yards in the air per completed pass this season, down from 5.8 his rookie season.

Receiver Kendrick Bourne said at least part of the reason the offense might not be getting more chunk plays in the passing game is that Jones isn’t being given time.

“We’ve got to get the ball downfield,” Bourne said following the Buffalo loss. “Mac needs more time. He’s obviously running around. So, it’s hard for him to get the ball downfield when you can’t really have time for him to throw. That’s no knock to the (offensive line), it’s just what we need to work on. Receivers can’t do nothing if the ball can’t get downfield. If we can’t throw it past 5 yards, it’s just going to be a long game. ... We have plays, but we can’t get to them. We’re calling them, but they’re just not working.”

The Patriots’ offensive line was down a pair of tackles against the Bills with Trent Brown (foot) and Yodny Cajuste (calf and back) both out.

Some relief could come this week with Marcus Cannon (concussion) eligible to return from injured reserve.

But veteran center David Andrews said there’s no time to dwell on what’s gone wrong to this point.

“We’re 6-6. We’ve got five games left. We can do whatever we want to do and it can go one way or the other,” he said. “I think everyone’s committed to trying to turn it around and making it go the right way. That’s all we can do.”