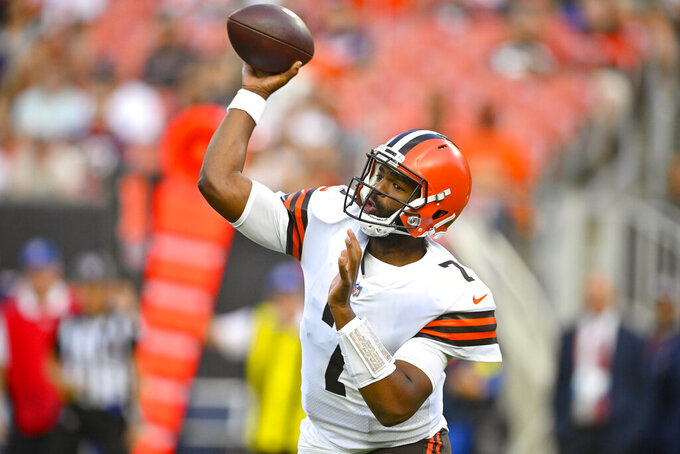 CLEVELAND (AP) — Justin Fields had a nightmarish visit to Cleveland as a rookie.

This one couldn't have gone much better.

Fields threw three touchdown passes in the first half, leading the Chicago Bears to a 21-20 win in their exhibition finale over the Browns, who got their first in-game look at substitute starting quarterback Jacoby Brissett on Saturday night.

Last season, Fields was sacked nine times — 4 1/2 by All-Pro Myles Garrett — and the Bears (3-0) were throttled by the Browns in a 26-6 blowout at FirstEnergy Stadium. Chicago was held to just 1 net yard in what was one of many rough outings for Fields.

“For sure,” Fields said when asked if he reflected on that Sept. 26 matchup. "I was of course thinking about that and glad 95 (Garrett) wasn’t playing today.”

With the Browns resting Garrett, Pro Bowl cornerback Denzel Ward and a few other first-teamers, Fields fired a 22-yard TD pass to tight end Ryan Griffin in the first quarter and then connected with receiver Dante Pettis and tight end Cole Kmet on scoring plays in the second.

Fields looked comfortable and composed while finishing 14 of 16 for 156 yards. He's in a new system under first-year coach Matt Ebeflus, and Fields said the performance by Chicago's starting offense could be a sign of things to come.

“Definitely a turning point," he said. "We can build on it and next week we can get better.”

Cleveland's backups rallied in the second half with quarterback Josh Rosen's TD sneak pulling the Browns (1-2) within a point. However, Rosen's 2-point pass attempt to receiver Javon Wims was incomplete with 2:31 left.

This was Brissett's first preseason action for the Browns, who are hoping the 29-year-old veteran can keep them in contention until December while Deshaun Watson serves his 11-game NFL suspension.

He completed 13 of 23 passes for 109 yards with an interception, a decent performance but maybe not good enough to end speculation that the Browns will look for outside help before the season starts.

“I thought today was a step in the right direction,” Brissett said. “Obviously we’ve got more time coming up in the next two weeks. But today was definitely a good steppingstone, getting in and out of the huddle, calling plays, hearing it from (coach) Kevin (Stefanski). I thought today was good.”

Brissett is slated to play until at least December while Watson, who signed a $230 million contract with the Browns in March, serves his suspension for violating the league's person conduct policy.

Watson was accused of sexual misconduct and harassment by two dozen women during massage therapy appointments while with Houston. The three-time Pro Bowler begins his ban Tuesday.

Brissett's first pass was on target, but slipped through the hands of second-year wide receiver Anthony Schwartz, who had another drop and was booed loudly. He's been inconsistent all summer, but isn't in jeopardy of getting cut.

“We’ve talked about Anthony,” Stefanski said. “Anthony’s spoken to you guys. He’s very accountable. So I know he wants to be better. I know he will work very hard.”

He threw a 6-yard TD pass to diving tight end Miller Forristall and followed it by leaping at the pylon for a 2-point conversion.

The fourth-round pick from LSU carried it over to the game, converting kicks of 57 and 46 yards while pushing a 58-yarder left.

“It really hasn’t felt anything different since college, just going out there and kicking the ball,” York said. “I would have liked to see the one go through for the first kick. But other than that, I’ve gotten reps, gotten out there, gotten comfortable.”

Garrett and Ward were joined on Cleveland's sideline by defensive end Jadeveon Clowney, who was not in uniform after being excused from a practice earlier in the week.

Bears linebacker Roquan Smith was supposed to play, but was kept out after experiencing tightness during warmups. Smith missed Chicago's first two games while staging a contract “hold in.”

Eberflus didn't specify the location of Smith's tightness and said keeping him out was “a group decision.”

Browns: Stefanski is optimistic Pro Bowl RG Wyatt Teller (knee) and S Grant Delpit (hip) did not suffer serious injuries. They're likely to undergo further testing. Teller had a sleeve on his leg as he left the stadium. ... DE Chris Odom (leg) was carted off in the fourth. He was the USFL's Defensive Player of the Year.

Bears: Host the San Francisco 49ers in the season opener on Sept. 11.

Browns: A reunion with former quarterback Baker Mayfield in the opener at Carolina on Sept. 11.