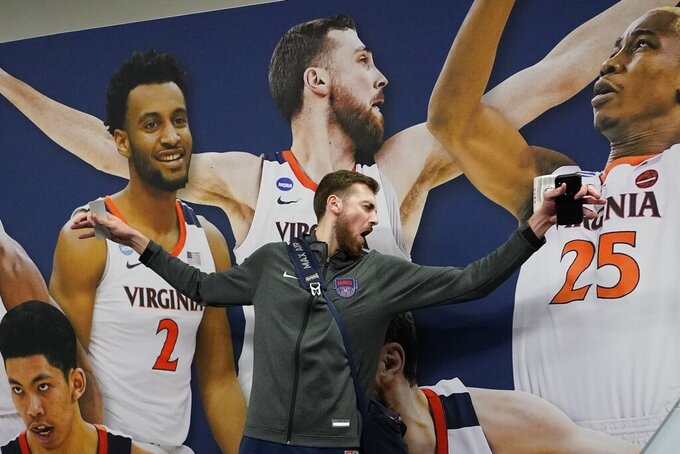 Virginia's Jay Huff poses by him picture on the hall after a practice session for the semifinals of the Final Four NCAA college basketball tournament, Thursday, April 4, 2019, in Minneapolis. (AP Photo/David J. Phillip) 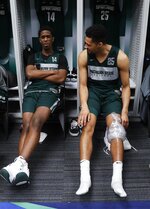 MINNEAPOLIS (AP) — Tom Izzo certainly knows his way around the Final Four, even if the longtime Michigan State coach had never toured U.S. Bank Stadium until the Spartans arrived for practice Thursday.

The rest of his coaching compatriots? They could probably use a road map.

It's not just getting around that is challenging, though Texas Tech coach Chris Beard spent a few seconds outside his locker room deciding which way to the press conference (left) and which way to the floor (right). It's also navigating everything else that comes with the pomp and circumstance of college basketball's biggest weekend, from the ticket requests to the fans to the media crush.

So when Beard called Izzo out of the blue this week — a rarity in the regular season, much less in the run-up to a national semifinal — the Spartans' coach gave the Final Four newcomer some help.

"My only advice I'm going to give you," Izzo recalled telling Beard, "has nothing to do with the game, but has a lot to do with: get your tickets and hotels done today."

None of those three have been a head coach in a Final Four, which means just like their starstruck players gazing in wonder at the cavernous home of the Minnesota Vikings, this is all new to them: the golf carts to whisk them around the arena, the demanding press schedule, the constant attention back home and now in downtown Minneapolis, where their pictures are displayed just about everywhere.

Outside their locker rooms, for example. Texas Tech star Jarrett Culver stopped to take photos and admire a massive image of himself and his teammates plastered on the cinderblock wall.

How special? Ask teammate Davide Moretti, who grew up in Bologna, Italy.

"The first thing I saw on Instagram was actually a website that's kind of like ESPN for us called SkySports, where they always talk about soccer or something like that," Moretti said. "Then I saw my picture and it was about how a basketball player like me playing in the Final Four is kind of a big deal, so everyone was texting me and saying, 'Wow! That's crazy.'"

Fans back in Lubbock made sure to give the Red Raiders a festive send-off, just like the pigskin-loving Auburn fans did for their first Final Four team. Toilet paper was still hanging from the trees in Toomer's Corner when the Tigers departed for the airport, and it was their jaws that were hanging open when they walked onto the court for their first practice Thursday.

"It's so huge. The court looks so small in comparison to everything around it," said the Tigers' Anfernee McLemore. "But I don't think it will really hit us until the building fills up. When we were out there shooting, it felt just like basketball."

Maybe that will change Friday, when fans are invited inside for open practices.

It certainly will have changed by Saturday night.

"It's very rare for this to happen at a place like Auburn," said Steven Pearl, an assistant on his dad's staff. "Coach tells them enjoy it, but at the same time understand what you're doing here. We still have two games left. Enjoy the moment, look around, take it all in, but understand we have a job to do."

Virginia should have no trouble keeping focus.

Remember, the Cavaliers let it lapse in the first round a year ago and became the first No. 1 seed to lose to a No. 16 seed. The defeat was so humiliating that Virginia star Kyle Guy used a frame from the loss to UMBC as his screensaver, almost as if he was serving penance.

It also shouldn't be much trouble for Michigan State.

This is the second time in five years and eighth time overall Izzo has been to the Final Four, the fifth-most of any coach in college basketball history. The only current coaches who know their way around any better are Mike Krzyzewski and Roy Williams, and both of their teams are sitting at home.

You can bet Izzo will point his team the right direction at the Final Four.