Flashy return of Seahawks' offense comes too late in season 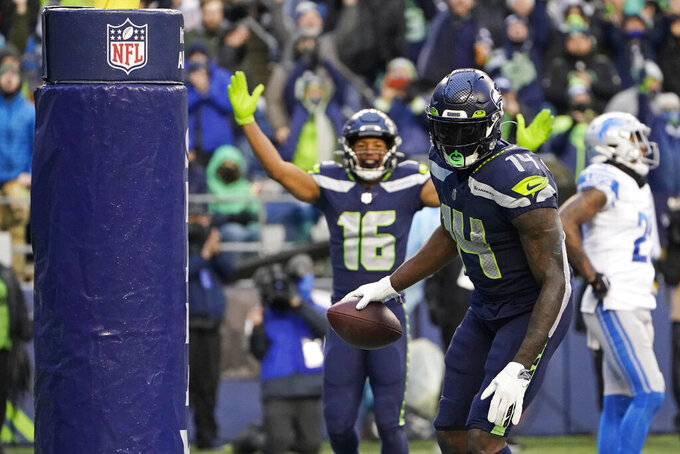 Seattle Seahawks wide receiver DK Metcalf (14) holds the football as wide receiver Tyler Lockett (16) reacts after Metcalf scored a touchdown against the Detroit Lions during the second half of an NFL football game, Sunday, Jan. 2, 2022, in Seattle. (AP Photo/Elaine Thompson)

RENTON, Wash. (AP) — The bookends to the Seattle Seahawks' season may have provided the clearest examples of what their offense was expected to look like.

Everything in between turned out to be a jumbled mess with a lot of what-ifs and reasons why Seattle (6-10) will finish with its worst record since 2009.

“It’s been really frustrating that you haven’t been able to see it because it’s there. And we’re capable of being like this,” coach Pete Carroll said after Sunday’s 51-29 romp over Detroit.

The Seahawks looked terrific in their home finale against the lowly Lions. Rashaad Penny finished with 170 yards rushing and had already posted a career high — 144 yards — before halftime. DK Metcalf celebrated in the end zone three times after scoring infrequently during the second half of the season.

Offensive coordinator Shane Waldron was creative in his play-calling, and Seattle had a threat of explosiveness that was missing for most of the season.

“I think we executed in every way,” quarterback Russell Wilson said. “I’ve been telling you guys for a little bit here, that’s kind of the game we want to play.”

Seattle looked terrific in Week 1 at Indianapolis. There was balance between run and pass, and Wilson was efficient throwing the ball.

Then that all disappeared for the better part of three months. Among the reasons: a shaky defense, Wilson’s finger injury, terrible third-down efficiency, an inconsistent run game and some poor play-calling.

Finally, in Week 17, Seattle gave fans a glimpse of what might have been.

Penny's revival continues to be one of the best late-season stories for Seattle. He has a league-leading 481 yards rushing over the past four weeks, more than 100 yards ahead of Indianapolis' Jonathan Taylor, the next-best rusher over that span and the league leader in rushing yards this season.

Rumors and speculation about changes coming to Seattle and the possibility of trading Wilson aren't going to calm down anytime soon. Wilson noted last week that the game against the Lions could be his final home game with the Seahawks.

Based on his chats with Wilson, Carroll is dismissing all the conjecture.

“The kind of conversations we have behind the scenes are not in line with the rumors,” Carroll said Monday. “OK, there you go. No, they’re not at all. We’ve been talking. We’ve been together and connected throughout this whole season. That’s why it’s easy to dismiss those at this time.”

Third-year linebacker Cody Barton has rarely had the chance at extended playing time during his career as a backup to Bobby Wagner. When Wagner went down with a knee injury early in Sunday's game, Barton was thrust into the most extensive game action of his career.

He responded with seven tackles, one tackle for loss and and played 62 defensive snaps — 98% of total defensive plays. Barton had never played 60 snaps in a game and had played 50 or more just three previous times, none of those at middle linebacker.

“I had a lot of fun, to be honest,” Barton said. “I just love being out there and playing football and just being with the team and being able to compete out there. It’s awesome.”

Wagner acknowledged Sunday could have been his last home game with the Seahawks because of a massive salary cap number. If that happens, leaving with an injury on the first defensive play would be an unfortunate conclusion to what’s been an incredible career with the Seahawks.

Wagner's knee sprain was the most significant injury. Carroll said Wagner will not need surgery. ... TE Will Dissly (heel), RB DeeJay Dallas (thigh) and DE Carlos Dunlap (ankle) will be evaluated later in the week.

170 — Penny became the sixth player to rush for at least 170 yards in a game for the Seahawks, joining Shaun Alexander, Thomas Rawls, Ricky Watters, Curt Warner and Chris Warren. His 170 yards were the second most by any running back during Carroll’s tenure. Rawls had 209 yards in a 2015 game vs. San Francisco.

Seattle will close out the season on Sunday at Arizona with the chance to deny the Cardinals an NFC West title. Carroll has never won fewer than seven games in a season in his 12-year tenure with the Seahawks.