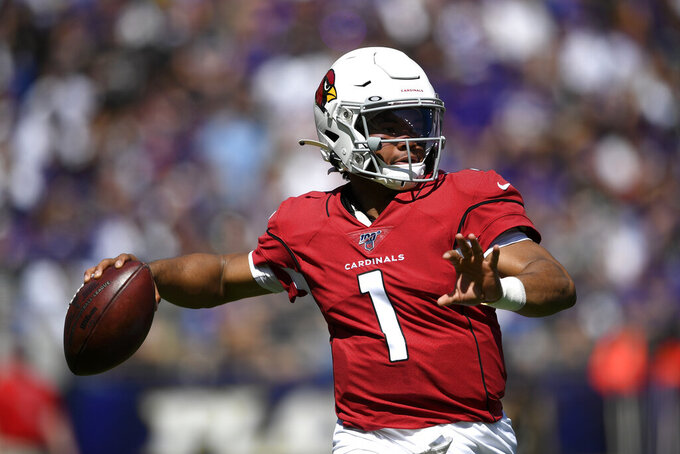 Arizona Cardinals quarterback Kyler Murray throws to a receiver in the first half of an NFL football game against the Baltimore Ravens, Sunday, Sept. 15, 2019, in Baltimore. (AP Photo/Nick Wass)

GLENDALE, Ariz. (AP) — Arizona's Kyler Murray and Carolina's Kyle Allen will be competing for the spotlight when the two teams face each other Sunday in Week 3.

In some ways, it's just like old times for the quarterbacks and former college teammates.

Allen will make his second career start after the team ruled starter Cam Newton out because of a mid-foot sprain he aggravated on Sept. 12. Allen is 1-0 as a starter after beating a New Orleans team in Week 17 that was already looking ahead to the playoffs.

Cardinals coach Kliff Kingsbury doesn't expect any letdown from the Panthers, even without Newton.

"Last time Kyle Allen stepped on the field they won and scored 30 points on the road," Kingsbury said. "We understand we'll have our hands full."

Murray, the No. 1 overall pick in April, has had a very promising start to his NFL career. He's just the second quarterback in NFL history to throw for at least 300 yards in his first two career games.

But now that Newton can't go, the Panthers (0-2) turn to Allen, who is in his second season. Murray and Allen played together at Texas A&M in 2015, splitting time for a team that finished with an 8-5 record.

In a strange twist, both of the highly rated recruits ended up transferring at the end of the season. The two say they got along fine, even if circumstances weren't ideal. Murray called it a "tough situation." Allen said they were "never super tight. We had a mutual respect for each other obviously."

Now they will be on the same NFL field.

"We went to school together. We played together," Murray said. "I don't really have control over who starts over there. That's their deal. I just have to get ready to play, and whoever's their quarterback is their quarterback."

Receiver Larry Fitzgerald has looked 10 years younger over the Cardinals' first two games with 13 catches for 217 yards and a touchdown.

The 36-year-old has developed a quick rapport with Murray and the connection looks like it's going to be a go-to for Arizona (0-1-1) all season. Panthers coach Ron Rivera said Fitzgerald is a player — along with Panthers TE Greg Olsen — whom he encourages young players to emulate.

Arizona's offense has been very efficient this year except when it gets in the red zone. That was a big issue in last week's 23-17 loss to Baltimore: The Cardinals had to settle for three field goals after getting inside Baltimore's 5-yard line. It would help to get David Johnson going in the run game. He had just 14 yards rushing on seven carries in Week 2.

KUECHLY ON A TEAR

The Panthers may be 0-2 but it has little to do with the play of linebacker Luke Kuechly, who is off to another terrific start. The five-time All-Pro selection had 17 tackles, including a tackle in the end zone on running back Peyton Barber for a safety in last week's 20-14 loss to the Buccaneers. Kuechly now has 973 tackles for his career, passing Hall of Fame linebacker Brian Urlacher for the most tackles by a player through his first eight seasons. Kuechly's average of 9.4 tackles per game is second only to Miami's Zach Thomas (9.8) in NFL history.

"They have such smart defensive players," said Kingsbury. "It starts with Kuechly, who gets everything lined up and has such a great feel for the game and knows what offenses are going to run before they even run it."

ALL McCAFFREY, ALL THE TIME

Panthers offensive coordinator Norv Turner said before the season he wanted to limit Christian McCaffrey's reps in the offense for fear of wearing him down. Well, that hasn't quite happened. Through two games, McCaffrey has been on the field for all 137 offensive plays. After combining for 209 yards on offense and two TDs in the season opener against the Rams, McCaffrey will look to get back on track against Arizona after being held to 53 yards by the Bucs. The Panthers scored 14 points against Tampa Bay, but it came on four field goals and a safety.

If the Panthers want to succeed on offense they will need to start with moving the chains and sustaining drives. Carolina is converting a paltry 32% of its third downs (8 of 25) and is 0 for 3 on fourth-down conversions. A big part of that is the Panthers haven't used the multidimensional Newton as a runner as they have in the past due to shoulder and foot issues. In fact, Newton has five carries for minus-2 yards with two fumbles. With Allen expected to start at QB, it could add another dimension to the offense.