Frustrated Dolphins still in playoff race after loss to KC 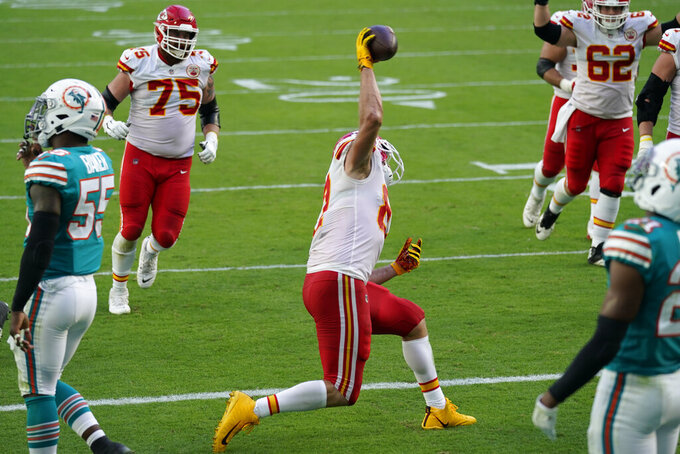 Kansas City Chiefs tight end Travis Kelce (87) spikes the ball after scoring a touchdown during the first half of an NFL football game against the Miami Dolphins, Sunday, Dec. 13, 2020, in Miami Gardens, Fla. (AP Photo/Lynne Sladky)

MIAMI (AP) — The Miami Dolphins weren't satisfied with putting a scare into the Kansas City Chiefs, which in itself is a sign of progress for a franchise striving to shake its perennial also-ran status.

“There are no moral victories,” defensive end Christian Wilkins said. “We did some good stuff; we did some not-so good stuff. This is a good game to learn from. We didn’t get the result we wanted.”

The Dolphins had a 4-1 edge in turnovers and sacked Mahomes three times, including for a 30-yard loss that set up the game's first touchdown. Rookie Tua Tagovailoa had his most productive day yet with 316 yards passing, even though his playmakers at receiver and running back were limited because of a wave of injuries.

With Miami’s loss, the Pittsburgh Steelers clinched a playoff spot.

Mahomes repeatedly hurt Miami, going 24 for 34 for 393 yards — 11.6 per attempt — and the Chiefs scored 30 consecutive points after falling behind 10-0. It was the sort of run the Dolphins' defense had hoped to avoid.

“The turnovers were good,” coach Brian Flores said. “We played well in spurts; we made some plays. But against a team like that, one misalignment, one miscommunication and they take advantage. That was the case today.”

The loss was the second in the past nine games for the Dolphins (8-5). It didn't doom their chances of making the playoffs for only the second time since 2008, but it made winning next Sunday against New England almost imperative.

“It was fun to see our defense get a lot of turnovers like that,” cornerback Byron Jones said. "But it’s a little frustrating, because we gave up a lot of easy stuff.

“We’ve got a really good opponent coming in next week, so that’s where all our focus and attention will be.”

Jones forced a fumble that Miami recovered, and also grabbed his first interception since 2017. Xavien Howard came up with an interception for the fifth game in a row, increasing his season total to an NFL-high nine, and Eric Rowe also had a pick.

But the four turnovers led to just 10 points for Miami.

“The defense gave us many opportunities,” Tagovailoa said. “Offensively we didn’t execute the way we should have. A lot of that falls on me with leadership, not taking what the defense is giving me, pretty much making rookie mistakes. You can't do that against a Super Bowl-caliber team like the Chiefs.”

Even so, the Dolphins were in contention until their onside kick failed in the final seconds. At that point, their injury list was longer than it has been all year.

They played without linebackers Kyle Van Noy and Elandon Roberts because of injuries, and top rusher Myles Gaskin was on the COVID-19 list. Mike Gesicki caught two touchdown passes before leaving in the fourth quarter with a shoulder problem, and wideouts DeVante Parker and Jakeem Grant went to the sideline with leg injuries.

Even so, Tagovailoa completed 28 passes and connected with nine receivers.

“I'm very confident with whatever guys I'm playing with,” he said. “Those guys did a great job stepping up, because a lot of guys were down.”