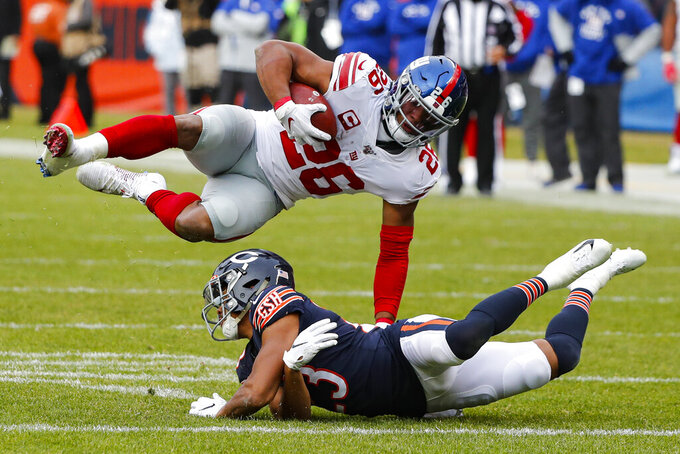 EAST RUTHERFORD, N.J. (AP) — The combination of playing the Philadelphia Eagles and Eli Manning returning at quarterback for the New York Giants might be what gets Saquon Barkley a much-sought 100-yard game rushing.

The NFL offensive rookie of the year last season, Barkley has not rushed for 100 yards since the first two games this year. He sustained a high ankle sprain before halftime the following week, and he has struggled to return to form after sitting out three games.

Barkley's best game since his return on Oct. 20 came last weekend when he gained 83 yards on 19 carries in a 31-13 loss to the Green Bay Packers at MetLife Stadium. The 22-year-old from Penn State showed flashes of being the guy who finished second in the league in rushing with 1,307 yards as a rookie.

That bodes well for Barkley and the Giants (2-10) heading into Monday night's game in Philadelphia against the Eagles (5-7), who are only a game out of first place in the NFC East despite three straight losses.

Barkley had two of his best games last season against the Eagles. He rushed for 130 yards, including a 50-yard touchdown, in a 34-13 loss at home in October. He gained 101 yards on 13 carries in a 25-22 setback in Philadelphia in November, scoring on a 51-yard run and catching a 13-yard TD pass.

Barkley said he was in a groove in the first game, while in the second, the running game was better overall but the team was done in by turnovers.

Having Manning back might help the run game. Manning opened the season as the starter and Barkley topped 100 yards against Dallas and Buffalo. Rookie Daniel Jones replaced Manning as the starter in Week 3 and Barkley been slowed by his ankle problem.

Now Jones has a sprained right ankle and the 38-year-old Manning is returning. He has taken the snaps the past two days with Jones walking in a boot.

“Eli, he’s a legend. He’s a Hall of Famer," Barkley said of the two-time Super Bowl MVP. “He just sees the field so well. He understands the game so well, he’s been doing it for a very long time and it’s what you expect from Eli. Obviously, I love the way he handled the situation when D.J. ended up being the starting quarterback, the way he operated in practice, the way he operated in the building was the same Eli that we know."

Barkley refused to compare the slow-footed Manning and the more mobile Jones.

“But Eli, like I said, like you said, he’s seen every defense, so it’s like secondhand to him," Barkley said. “He’s going to be able to help put us in positions to succeed, and I think D.J. has been doing a great job of that, too. So, like I said, I’m just happy for Eli to get an opportunity."

The Eagles don't give up much rushing. They are allowing an average of 91 yards, trailing only the Jets, Buccaneers and Saints in run defense. Two opponents have rushed for 100 yards: Ezekiel Elliott (111) of the Cowboys and Rashaad Penny (129) of the Seahawks.

Whatever happens, Barkley is looking forward to returning to Philadelphia. It's always an experience pulling into the parking lot. Eggs are thrown at the team buses. Children salute the players inappropriately with hand gestures.