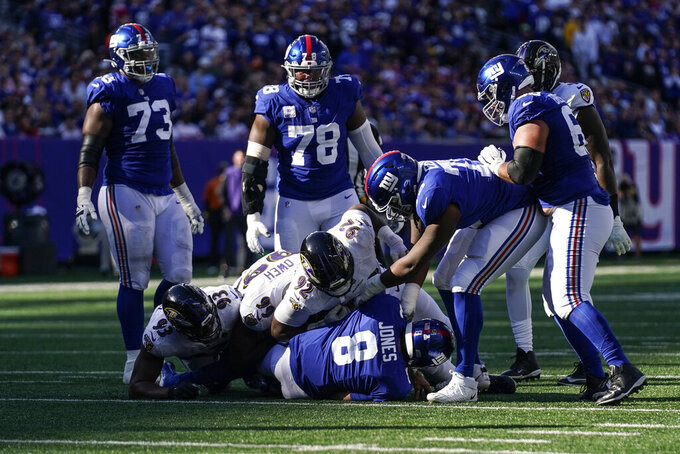 The New York Giants offensive line looks on as their quarterback Daniel Jones (8) is sacked during the second half of an NFL football game against the Baltimore Ravens, Sunday, Oct. 16, 2022, in East Rutherford, N.J. (AP Photo/Seth Wenig)

EAST RUTHERFORD, N.J. (AP) — Quarterback Daniel Jones and defensive tackle Dexter Lawrence have been linked since being taken in the first round by the New York Giants in the 2019 draft.

Not only were they drafted together, they ended up being roommates in training camp and close friends.

The two showed flashes in their first three seasons, but there were always questions about whether they would deliver on being first-round picks.

They're delivering this year, much like a lot of the Giants under Brian Daboll.

Lawrence, who had the fifth-year option on his rookie contract picked up by the team and new general manager Joe Schoen, has become a force on the defensive line. The former Clemson star who was the 17th pick overall has sacks in three straight games, and a career-high four heading into Sunday's game in Jacksonville against the Jaguars.

What is making him even happier is watching Jones, who was taken at No. 6. The quarterback has 1,021 passing yards and five touchdowns, while hitting 67% of his passes. He also has moved the offense with his legs, rushing for 236 yards and two TDs.

Jones also is making plays when they count despite not getting a ton of help from his line at times. He has thrown only two interceptions in 159 attempts.

“He has always been my guy,” Lawrence said Wednesday. "He is just being very confident, I can see it in him this year. Things are finally starting to make sense, which is good to see. He is just taking over the offense. He is creating plays for him and other people.

“He's been a playmaker and that's what you want to see out of your quarterback,” Larwrence added.

Jones is having his best season despite the Giants' decision not to pick up the fifth-year option on his rookie contract. He is making better and quicker decisions with the ball and that's helped New York rally from three double-digit deficits to beat Tennessee, Green Bay and Baltimore.

The winning and making plays has helped his confidence. Learning from his mistakes is another plus.

“You’ve got to look to the plays you’ve made, what’s been successful for us as a group and use that to build confidence to plan on what we’re going to do going forward,” the 25-year-old said.

Center Jon Feliciano and right guard Mark Glowinski joined the Giants this season as free agents and they admit Jones has succeeded with the line still working to be better.

“He's extremely, extremely competitive and he is tough as nails,” Feliciano said of Jones. “The way that he rolled his ankle (against Chicago), to come back and play a week later, to take hits the way he takes hits, to have blood all over his hand and destroying my butt with his blood; he's a competitor who just works his tail off.”

Glowinski said he heard and read things about Jones before joining the Giants. He said the criticisms have not panned out.

“I told him all the time when I got here, just to go out there and have fun,” Glowinski said. “I think if he just stays loose when he is out there and ignores the outside noise, I think that's the best for him.”

Not all first-round picks work out. New York also took Georgia cornerback DeAndre Baker with the No. 30 selection in 2019. He played one season and was released following an arrest after his rookie season.